HE was the old-school charmer who survived changing tastes to last more than 70 years in showbiz.

Nicholas Parsons, who died yesterday aged 96, turned his hand to everything from radio and comedy to film and theatre, and was still prancing around in suspenders into his seventies. 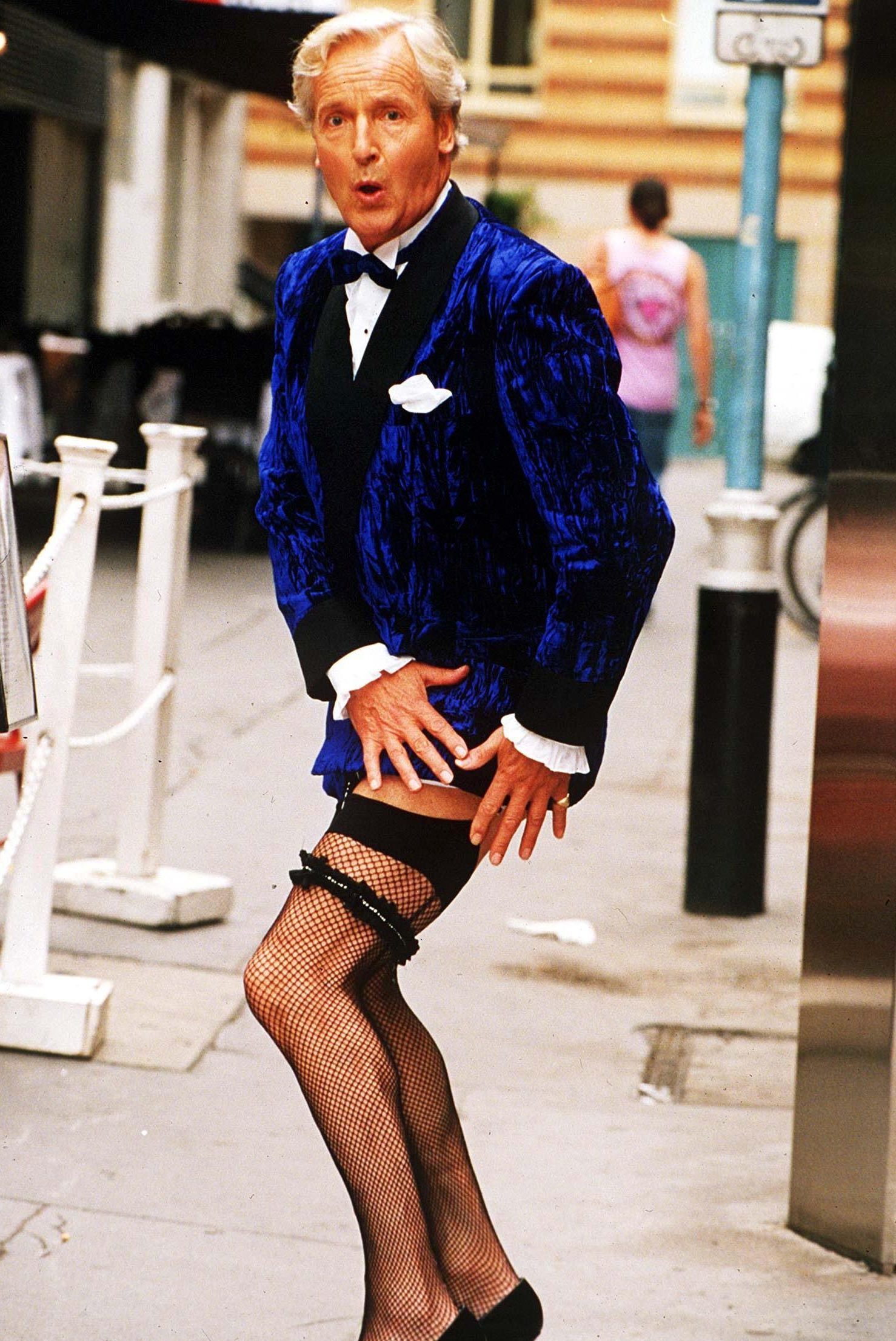 The broadcasting legend is perhaps best known for ITV game show Sale Of The Century and his 53 YEARS hosting Radio 4 panel show Just A Minute from the very first episode in 1967.

But it would have been very different if his strict parents had their way.

“My grandfather was a doctor, as was my father Paul. I irritated my family because they didn’t like show-offs.” 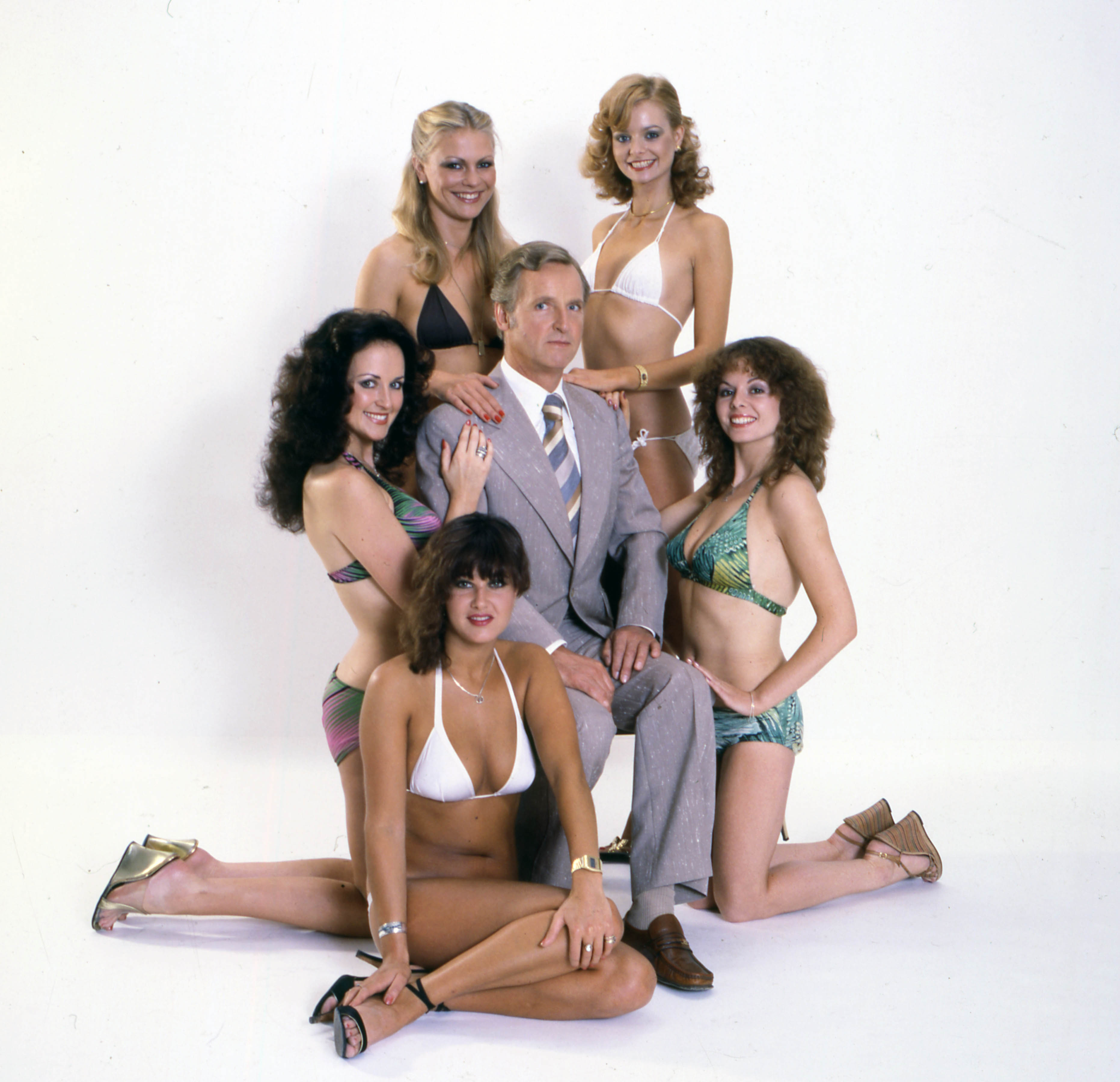 Dad Paul was the GP for Margaret Thatcher’s family in their home town of Grantham, Lincs — and it was rumoured he delivered the future PM.

Nicholas was privately educated, struggling with dyslexia and a stammer and being forced to write with his right hand despite being left-handed.

And when he told his parents he wanted to be an actor, they were so horrified they sent him to serve an apprenticeship at a pump and turbine firm in Clydebank, Dunbartonshire.

It was while training as an engineer there that he crafted his comedy skills — as a way to win over tough workmates. 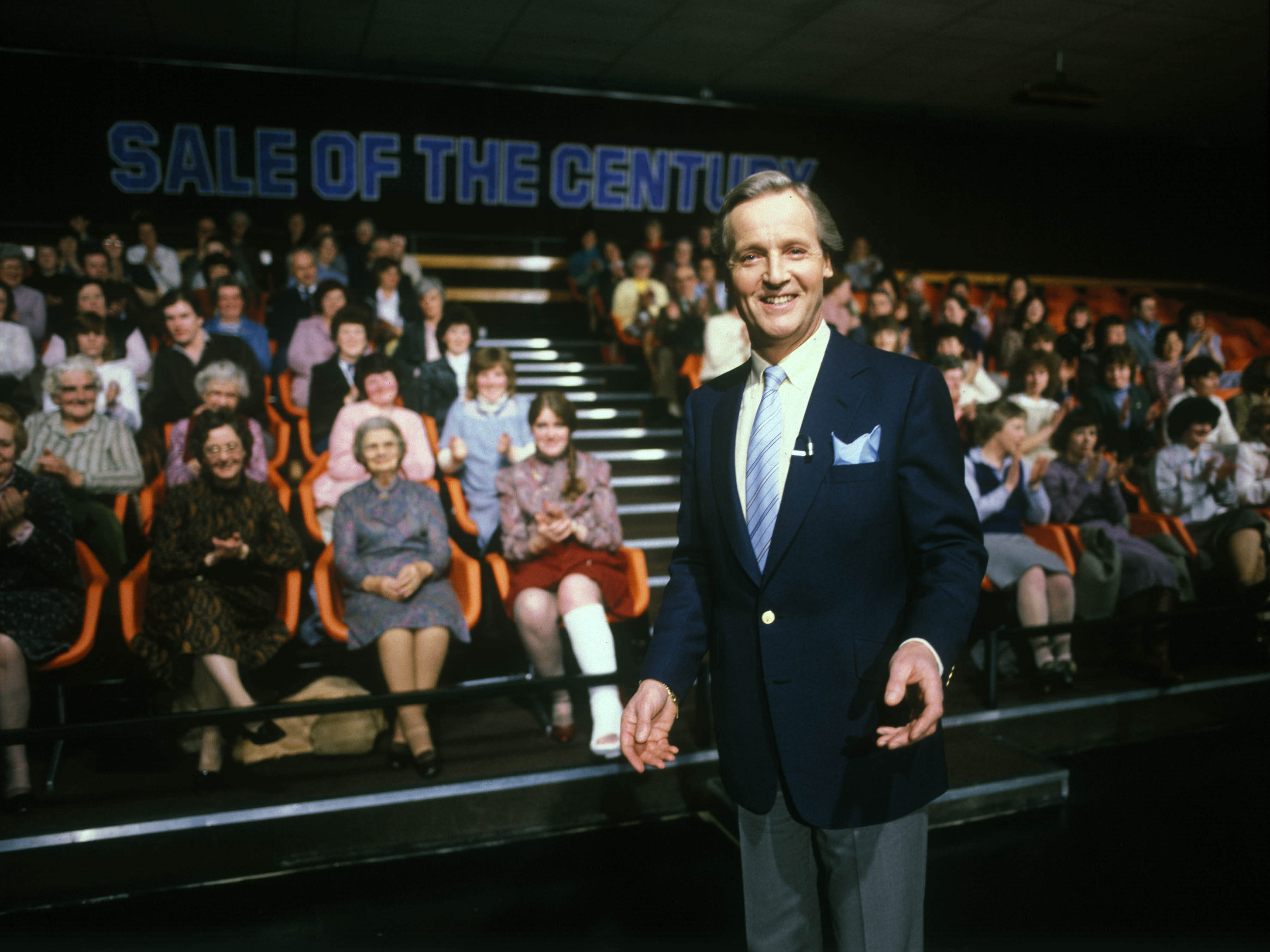 He said: “It was a total culture shock for a 16-year-old. I started work early when it was dark and snow lay on the ground, and I was surrounded by these men talking broad, guttural Glaswegian.

“Luckily, my ability to tell jokes and do impersonations endeared me to my workmates.”

He first got the performance bug aged four, when a circus came to town.

He recalled: “The sight of elephants walking single-file down the high street, followed by clowns and acrobats, captivated me. I think it instilled me with the ambition to become a performer.” 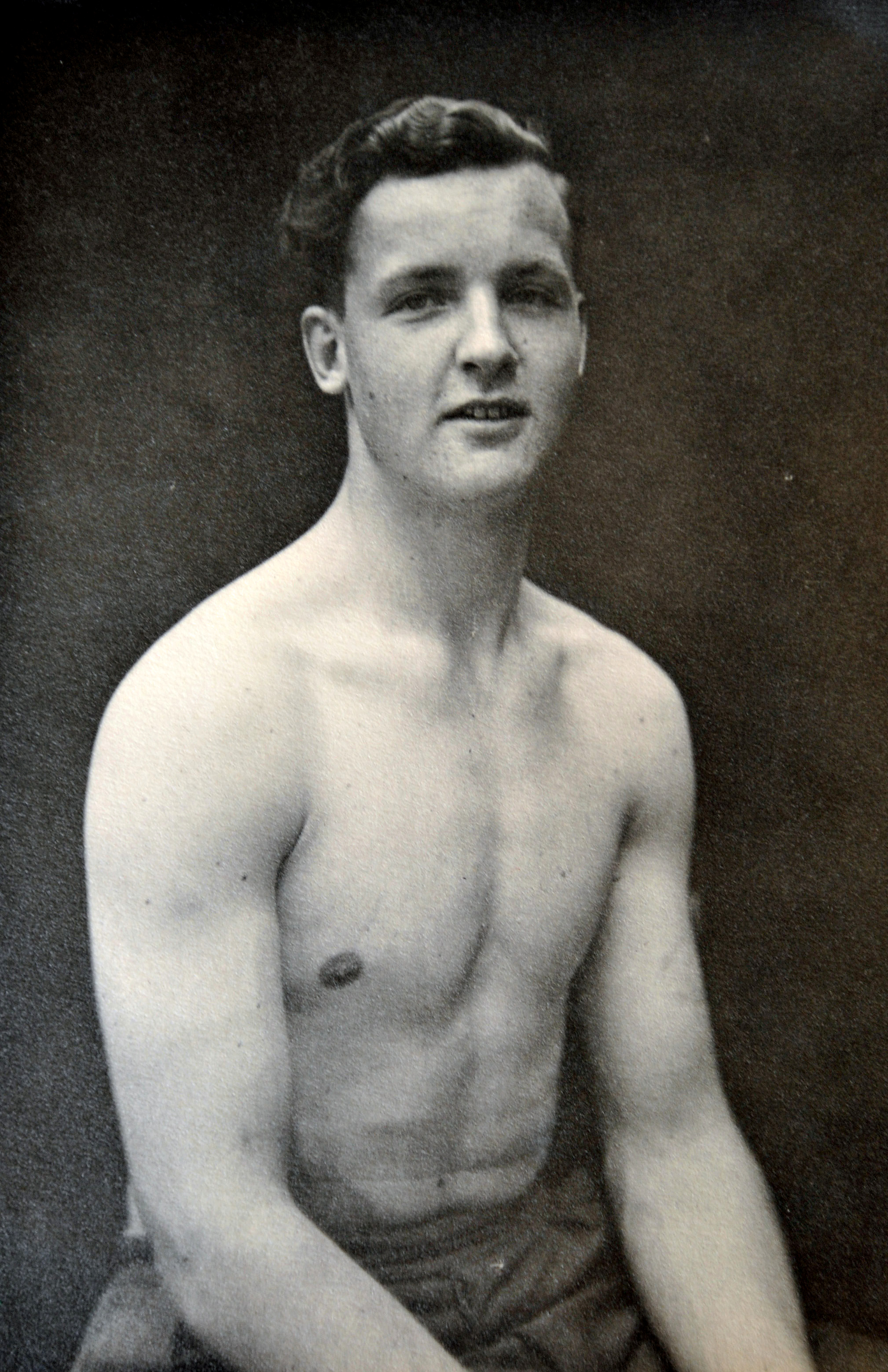 At 22 he set out on his own path, performing on stage, in films and as a comedian.

His big break came when teaming up with comic Arthur Haynes in 1956, playing the well-to-do straight man in his TV sketch shows.

According to Nicholas though, Arthur eventually ditched him because, “He thought I was getting too many laughs”. It was around that time that he was offered the host’s role on Just A Minute.

The pilot was a disaster, with Nicholas telling the producer: “I was awful.” His boss replied: “I know, but so was everybody else.” 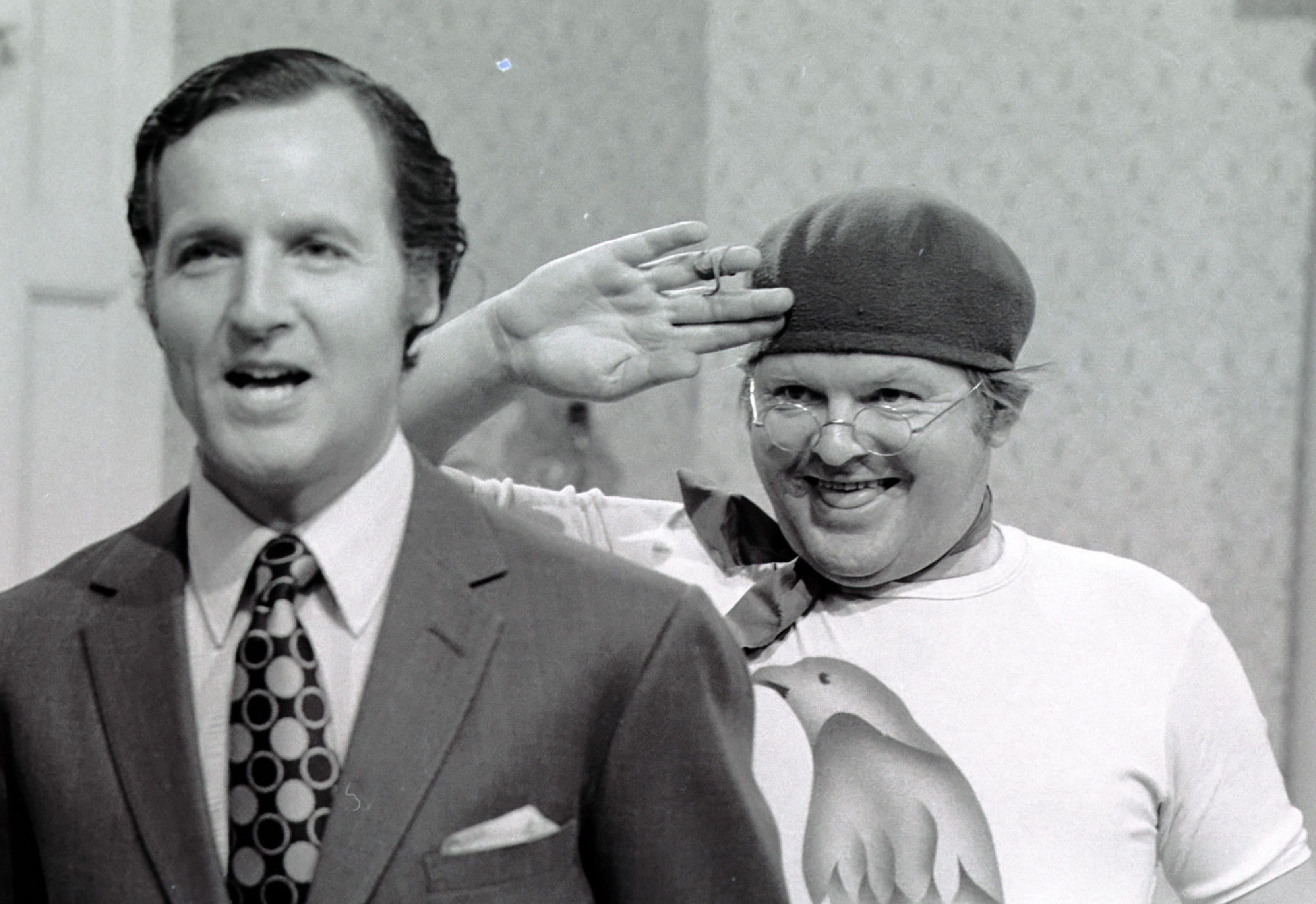 A tweaked format and rules where panellists have to talk on a subject for a minute without “hesitation, repetition or deviation”, meant a classic was born.

From 1968, Nicholas was a regular on The Benny Hill Show, before hosting ITV’s Sale Of The Century from 1971. 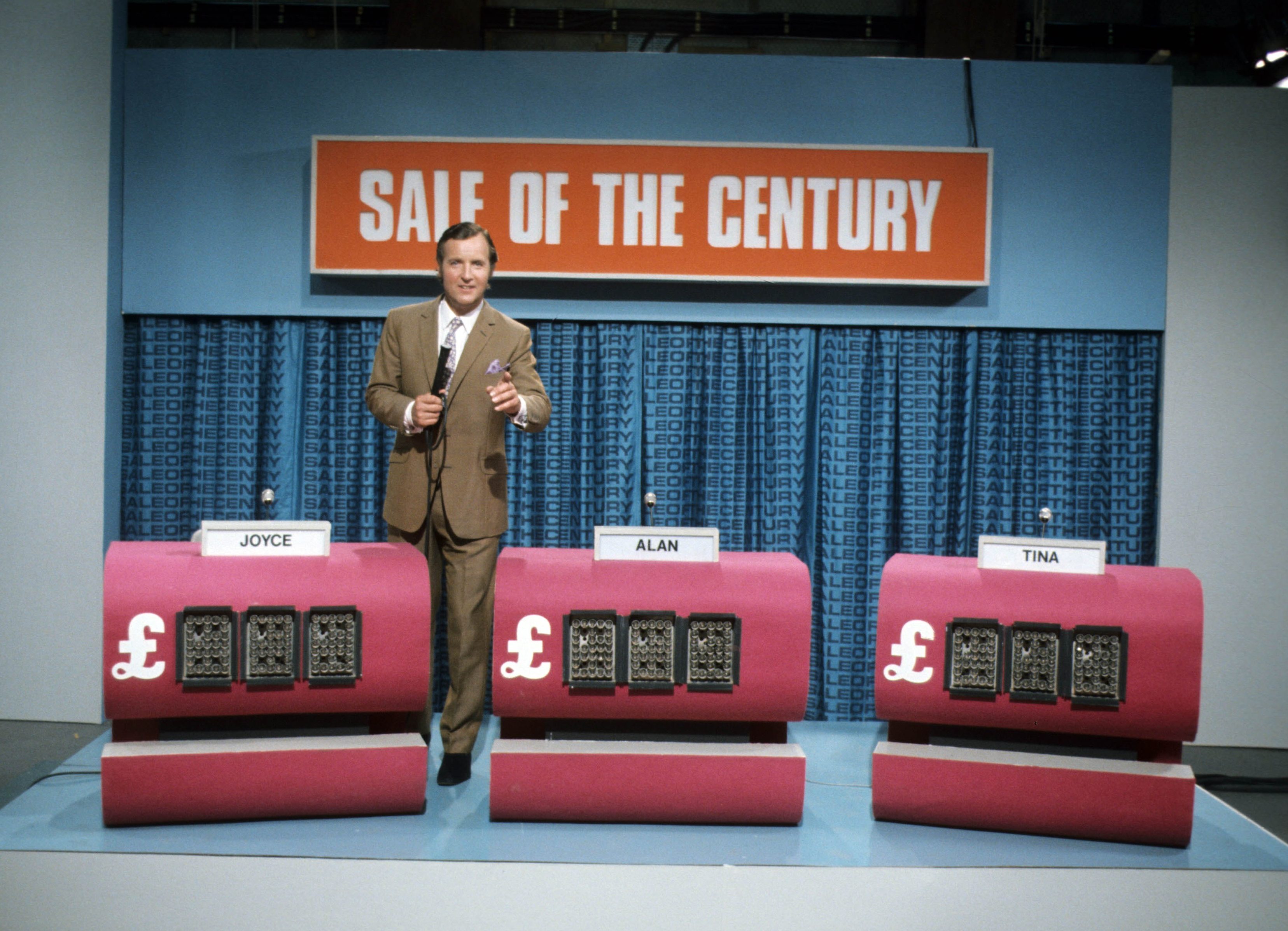 The Saturday night game show, which was watched by more than 20million viewers, saw contestants answer questions to build up a pot of money to spend on prizes at the end.

In 1990 it saw an early TV appearance of 30-year-old Simon Cowell, who won £20-worth of kitchen utensils. In the 1980s Nicholas presented prizes to Sun Bingo winners.

Off air he was a devoted family man and cricket fan. In 1954 he married actress Denise Bryer, who was the Playtex, Cross Your Heart Bra girl and the voice of Noddy and The Flowerpot Men’s Little Weed.

They had two children, Justin and Suzy, with Nicholas turning down roles to make sure he was around for them. He and Denise, 92, divorced amicably in 1989 after 35 years. 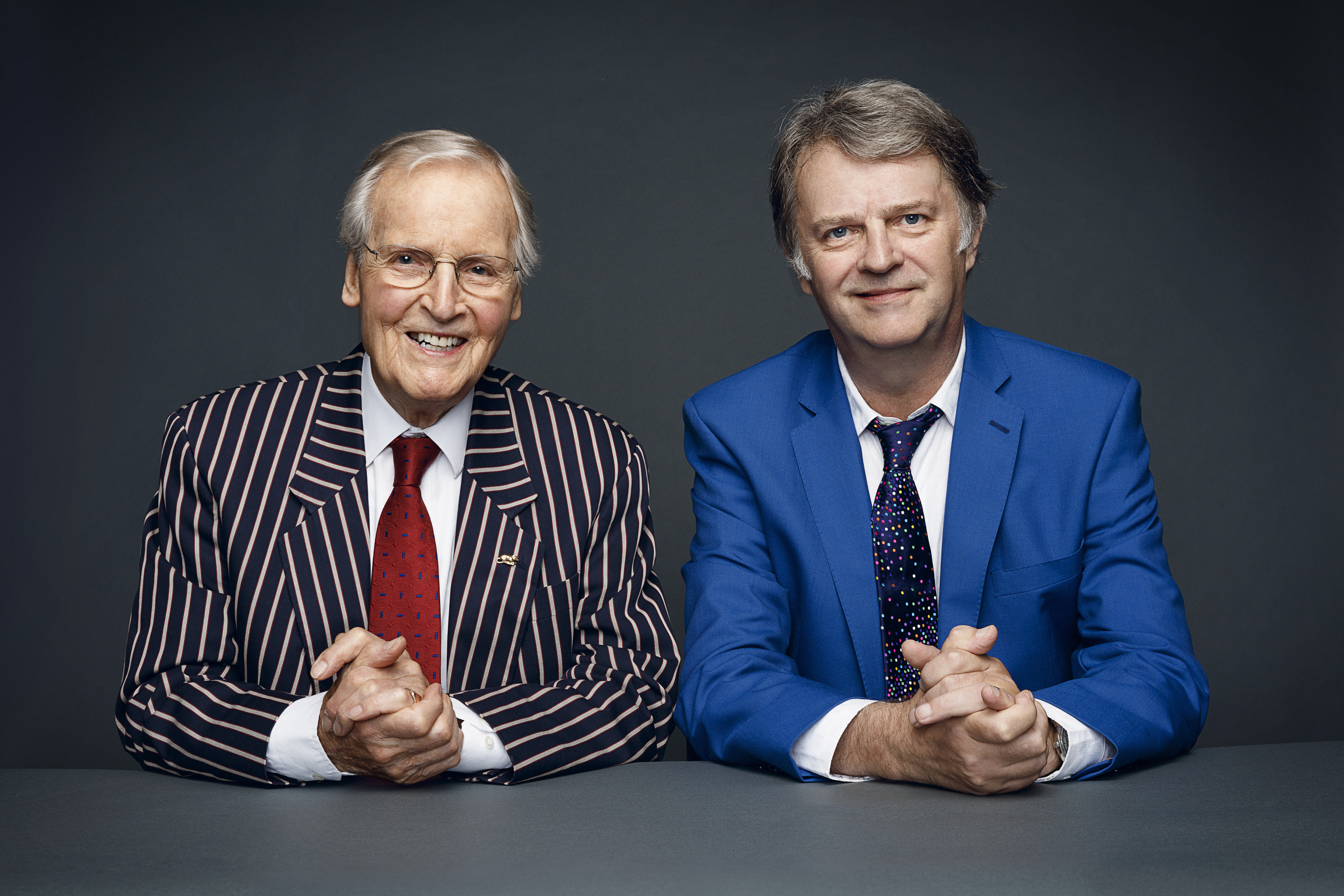 Not long afterwards he met second wife Ann Reynolds, who was 16 years his junior, at a cricket benefit quiz.

The couple moved into a converted barn in Bucks before later marrying in Barbados.

In the 1970s the life-long Liberal Party supporter was invited to stand as an MP in Yeovil, a seat later won by future Lib Dem leader Paddy Ashdown.

Nicholas said: “I would have liked that because I enjoy the theatrical atmosphere of the House of Commons. But I would have had to give up being an actor, so I turned it down.” 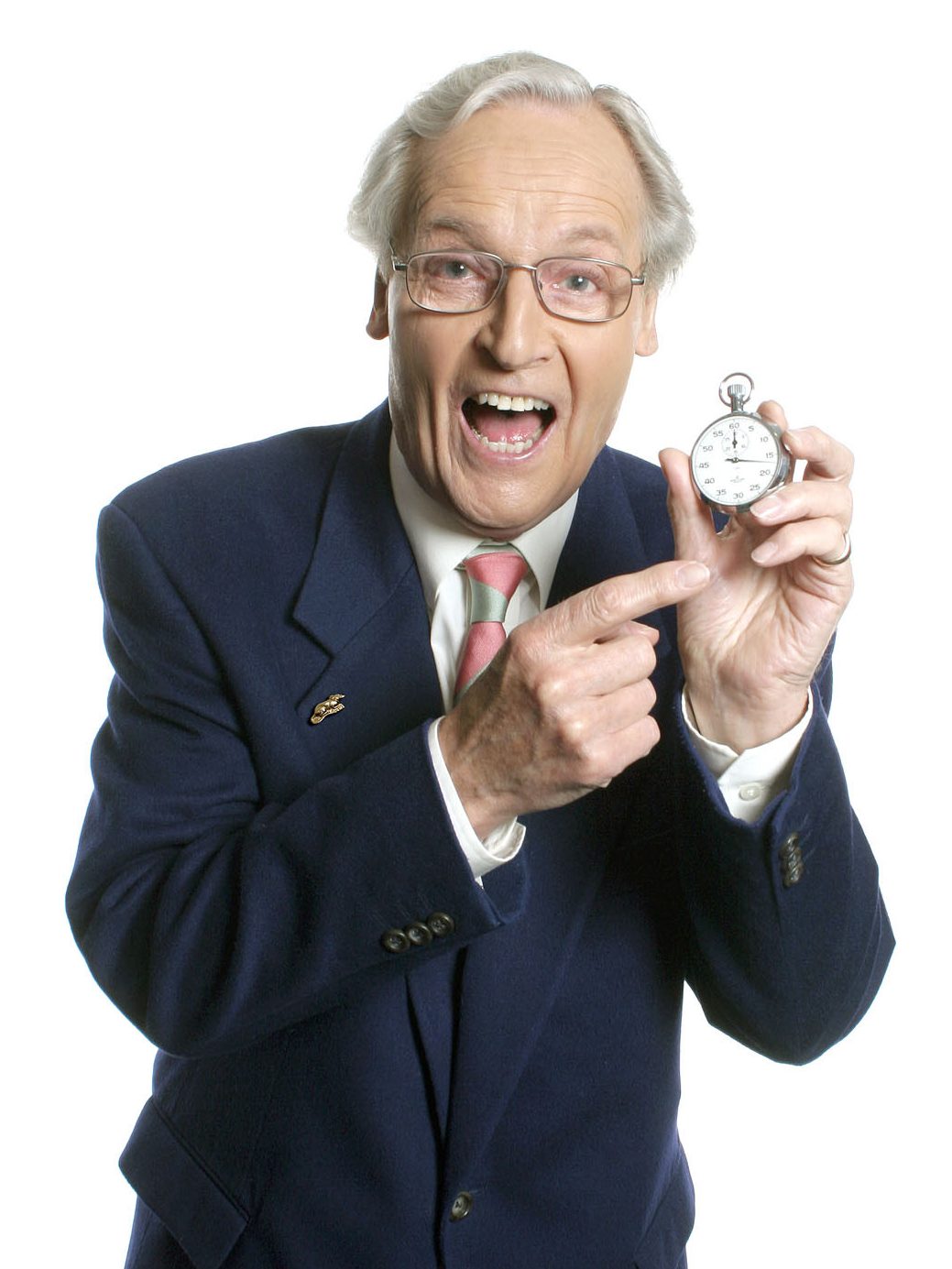 Smartly dressed Nicholas was more of a conservative when it came to language and fashion.

He complained that “foul language” was not funny, opposed the use of the word “kids” for children and thought open-necked shirts were “ugly”. Yet he was not afraid to play with his prim and proper image.

He made guests appearances on The Comic Strip and Have I Got News For You and he had a long run in suspenders as the narrator in The Rocky Horror Picture Show in 1994.

He said at the time: “Often there are screaming young girls waiting outside the stage door who ask me to sign their arms.

THE entertainer’s life was celebrated by people from across generations yesterday.

Chat show host Graham Norton tweeted: “Nicholas Parsons was truly the kindest and most generous person I’ve ever worked with. His continued delight at being a part of showbusiness should be an inspiration to us all!”

Comedian and Just A Minute regular Paul Merton, below with Nicholas, said: “He was always upbeat and loved to work. He gave 100 per cent to everything he did. I will miss him greatly as a friend, particularly as I thought he would be around for ever.”

BBC Director-General Tony Hall said: “Very few people have done so much to entertain audiences over the decades, and no one deserves to be called a broadcasting legend more than Nicholas Parsons. His charm, inventive intellect and ability to create laughs were unsurpassed.”

Dame Esther Rantzen said: “Nicholas was a miracle of broadcasting talent at an age when many people would have gratefully retired. His huge contribution to Childline and The Silver Line has made a huge difference transforming the lives of children and older people.”

Good Morning Britain presenter Piers Morgan tweeted: “RIP Nicholas Parsons, 96. A wonderful man who brought so much fun, charm, wit and pleasure to so many millions of people over so many decades. What a life.”

Radio 4 Today presenter Nick Robinson tweeted: “Without hesitation, deviation or repetition, I’d like to say that Nicholas Parsons was a broadcasting giant who proved that the straight man could be the real star of comedy.”

Comedian Russell Kane tweeted: “What a legend. Was always lovely and encouraging. Rest in peace, may your minutes be remembered without hesitation.”

Gyles Brandreth wrote: “The end of an era. Nicholas Parsons was such a lovely man – and so versatile: Actor, entertainer, writer, TV star and radio host without equal, but for me, most of all, friend. I knew him for more than 50 years. He was simply the best. Thinking of his wonderful wife Annie and family.”

Comedian Chris Addison wrote: “Years ago I was due to do Just A Minute and had to cancel at the last minute because of unexpected developments in the run-up to the birth of one of my kids. The next day Nicholas called to make sure everything was all right and ask if we needed anything. RIP, you gent.”

This Morning presenter Phillip Schofield said: “He was – and you’ll hear this from everyone – one of the nicest, kindest sweetest men.”

Recalling the Chortle comedy awards, stand-up comic Rachel Parris said: “Everyone was talking over the winners as usual, all night, until Nicholas Parsons won an award, and a reverent hush fell over the whole room followed by a thunderous standing ovation. Even drunk comics know true quality.”

Comedian Julian Clary tweeted: “Dear Nicholas Parsons RIP. So clever, funny and generous. I thought he, and the twinkle in his eyes, would go on for ever.”

“At 71 I’m very flattered to get this sort of adulation. I never had it when I was younger”.

And when he popped into Shaun Keaveny’s show on BBC Radio Six Music, he joked: “I thought they said ‘Sex Music’ at first. I don’t know what that is.

“But if you go on playing that all day you’ll be exhausted.”

Despite his assured performances in front of the microphone — usually without a script — Nicholas often described himself as shy and lacking self-confidence. 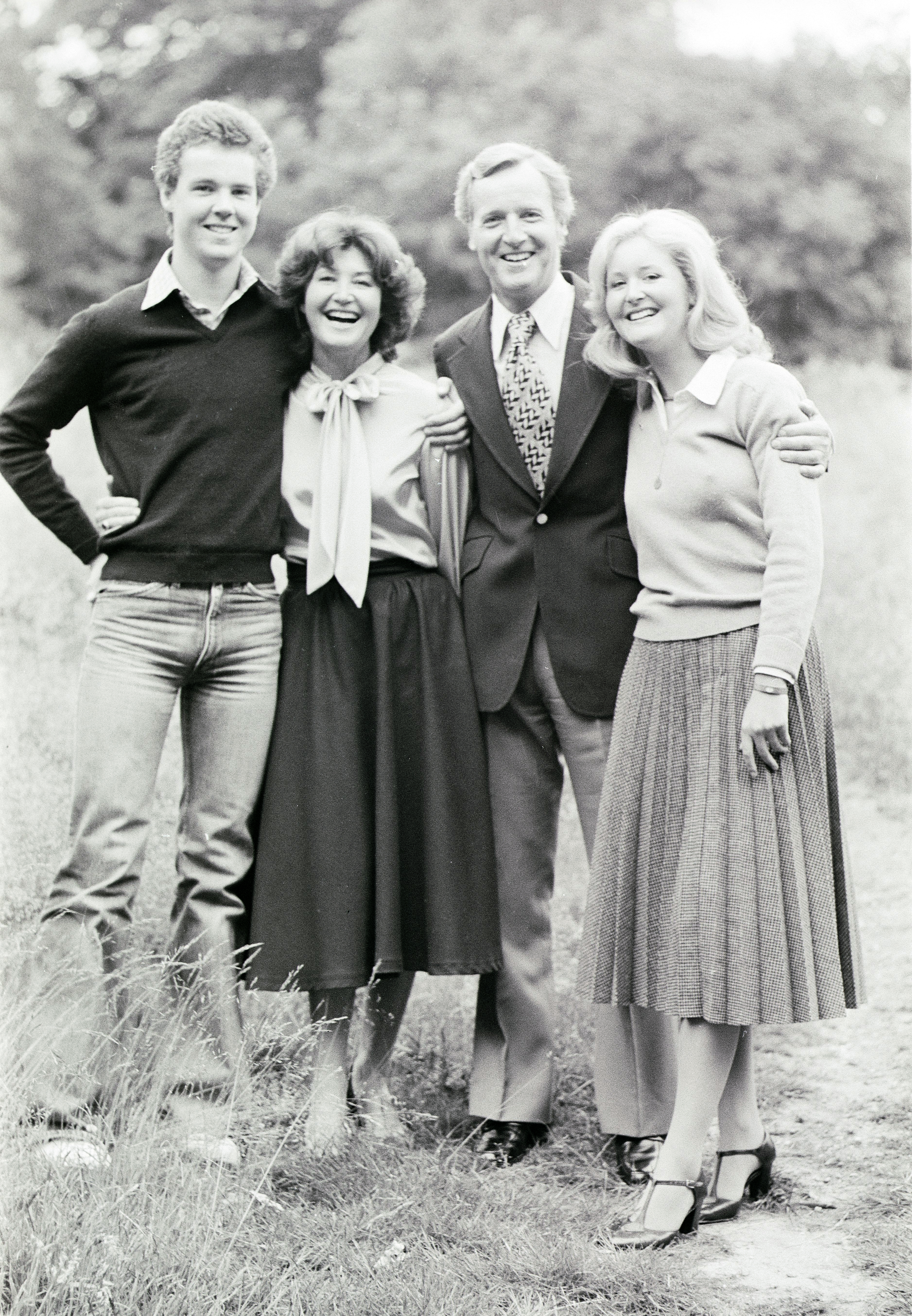 It was a condition that saw him seek the help of a psychoanalyst in the 1960s.

Last summer he suffered “a nasty fall” on a train and realised he had been working far too hard for a man in his mid-90s.

He said: “I was in Edinburgh for the festival, doing Just A Minute and other shows around the country. I didn’t respect the years I’ve lived and tried to do too much.”

He ended up in hospital with a bad back and had to pass on the Just A Minute hosting duties to Gyles Brandreth in August. 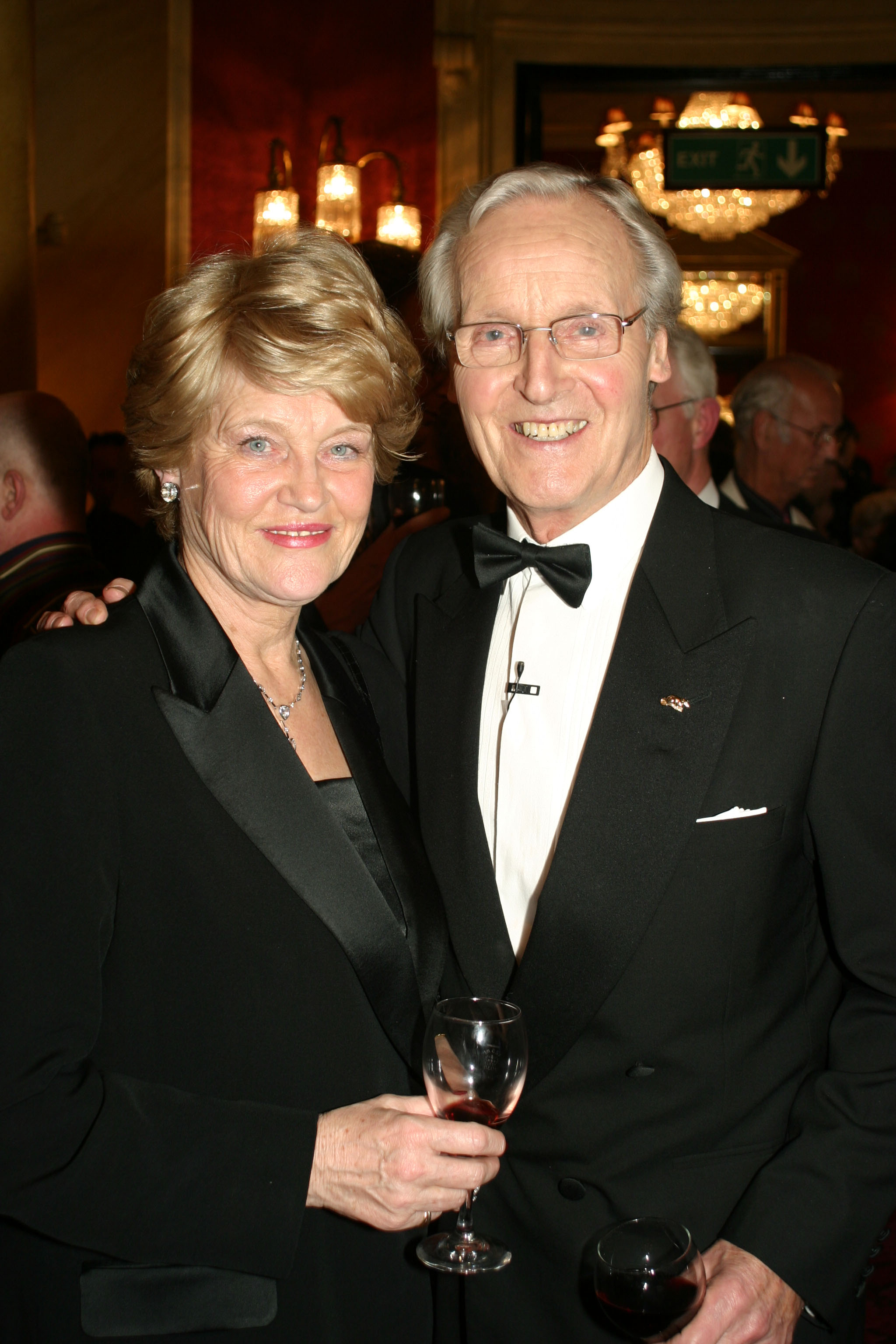 His last episode aired on September 16 — due to a natural pause between series rather than ill health. Though in his nineties, his death still came as a shock to fans.

His family said: “Nicholas passed away in the early hours of the January 28 after a short illness. He was with his beloved family who will miss him enormously and who wish to thank the wonderful staff at the Stoke Mandeville Hospital.”

Just A Minute pal Gyles added: “I thought he was immortal because he was always so alive. Such sadness today, but what a career to celebrate, from the 1940s to 2020. My hero.” 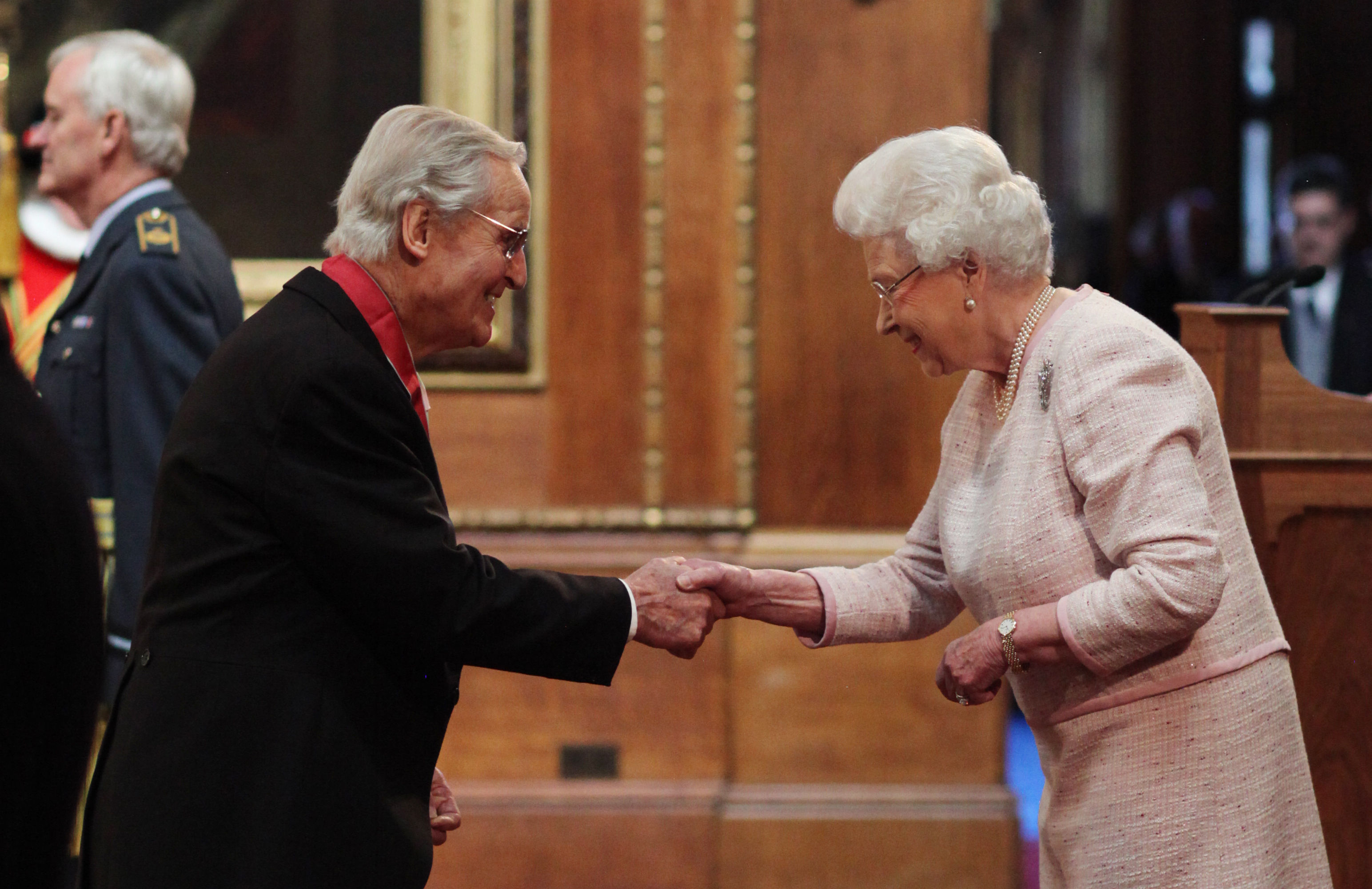