All happy workplace sitcoms are alike, but each new complication to the Lumen office in “Severance” makes the Apple TV+ series as disturbingly weird in its own way.

The “severed” floor — for employees who have elected to go through a surgical procedure that separates their memories of their time at work from their sense of self after-hours — has all the normal office accoutrements: desks, bad carpet, the worst break room of all time. But it’s also a place slightly out of time, with a modish ’60s aesthetic and nonsense computer operating systems.

Just as the Macrodata Refinement team of Mark (Adam Scott), Dylan (Zach Cherry), Helly (Britt Lower), and Irving (John Turturro) are beginning to realize there may be sinister things going on in Episode 7, they’re treated to a visit from floor manager Milchick (Tramell Tillman). They’ve won “a music dance experience,” the options for which include “Bawdy Funk,” “Effusive Ska,” and the episode’s title, “Defiant Jazz.” The whole thing is bonkers.

But there’s method to the madness, both in how the world of “Severance” is set up and how the dance party devolves. IndieWire spoke to production designer Jeremy Hindle and cinematographer Jessica Lee Gagné about why the party sequence feels like a break in every sense of the word.

Normally, Gagné says that the show employs a shooting approach that evokes a distant, creepy corporate eye roving over all the oddities of the severed floor. “A lot of the angles are much more aesthetic than typical surveillance [but evokes something similar], and then also any movement [feels] robotic,” Gagné said. “We would really avoid Steadicam and anything that was kind of like human-based, so that you would get that [surveillance] feeling from it. And then that framing was weird and awkward.”

Gagné said that the work of photographer Lee Friedlander — specifically his photos of office workers — informed the show’s willingness to get intrusively close to its characters, before backing up to show just how small the MDR team is in relationship to their environment. Hindle said Friedlander’s work informed his design sense of the severed employees’ workspace, with a twist: the office’s minimalism connotes dignified, important, cutting edge work. But the severed floor is built for babies.

“They’re just children at this place. It gives us a license to play with them a lot, to create things for them to do,” Hindle said. For instance, Hindle designed the computers that the MDR team uses as a tube-based touch screen, connected to trackballs that would mystify most millennials. As Hindle explained, “If you got to the outside world and tried to explain it to somebody, [it] would never make any sense.”

The way the office space is laid out also adheres to this idea of creating a space that is vast and sleek and yet at the same time constrained and awkward. Hindle said that he asked writer Dan Erickson how far underground the offices extend. “And he said, ‘Oh, it goes miles.‘” That understanding gives the show license to get weird with Lumen HQ. There could be a Minoan bull roaming the mazelike halls and it wouldn’t necessarily look more out of place than some of the things we see Burt (Christopher Walken) working on in the Optics and Design office. But the show largely restrains itself — until Episode 7.

Gagné, Hindle, and director Ben Stiller’s overall approach to the office is on full display when Milchick rolls in with a cart full of records. First there’s a gawking, spacious group shot of the team as Milchick enters, unnervingly centered in frame.

Even in a quick summary, the events of the scene are anything but centered and controlled.

Milchick changes the lighting pattern so that over the course of the song the office transforms into almost a foreboding club atmosphere: awash in strong red and purple lights that flash and almost strobe along with the music. Milchick moves fluidly across the frame as he dances around each of the MDR employees, almost circling them like a sheepdog. He gets Helly, Mark, and Irving to all dance, to varying degrees, but Dylan refuses to participate. The lights and music become more and more disruptive, and the distance between Dylan and his computer screen seems to shrink as Milchick gyrates around him. Something snaps, and suddenly Dylan’s screen flashes images from his “outie” memories: namely, he remembers that he has a child. Dylan explodes and attacks Milchick, biting him before the MDR team can pull him away. The stages of the Music Dance Experience in “Severance”

The sequence is an enormous divergence from the show’s usual style. “Everything in ‘Severance’ was extremely calculated,” Gagné said. “We did a lot of multi-camera stuff where we had to be super precise [and have defined] end point/start points. [For this sequence], OK, the camera’s different, it’s moving in a different way, this guy’s dancing, there’s color? Everyone’s just out of their element.”

To give the viewer that intuitive sense of change, Gagné and Stiller choose to utilize a Stedicam, first slowly pushing in on Mark and Helly and then following Milchick as he dances from one member of the team to another. By the time the camera twirls around Milchick and Helly, ramping up slightly in speed and giving us a 180-degree view, it feels almost drunk on defiant jazz. Gagné and Stiller also went with a 24mm lens for the sequence “because we almost wanted it to feel like a music video.”

The pulsing overhead lighting accentuates that feeling, functioning almost like a reverse dance floor. The way red and then strong purple and maroon lighting saturates the space is helped by the dimensions of the office, which are also off in subtle ways. “We made the ceiling really low,” Hindle said. “We really tricked that set out [so that] every angle and every little detail could be a place that you could live for an hour straight.” 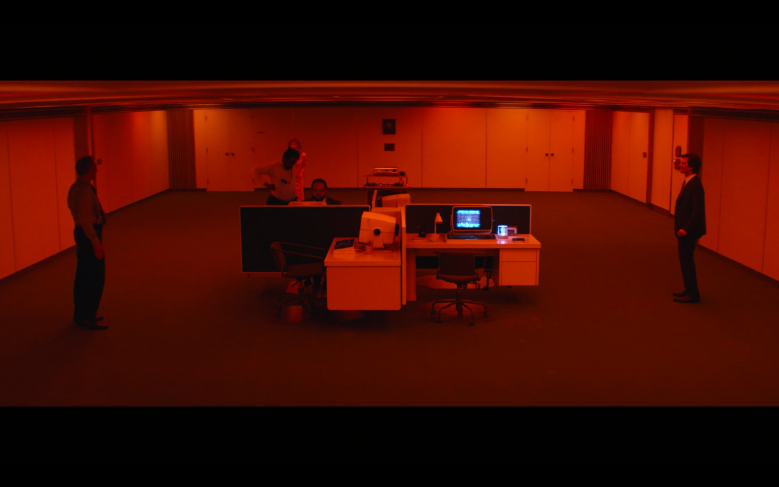 The party changes the look of “Severance”

The dance party starts to feel like it’s going for an hour straight as Dylan refuses to give in, and the lighting, the pace of the editing, camera work, and Tillman’s physical performance all pick up in intensity. “It was an opportunity for him to really come to life,” Gagné said. “I think the Steadicam gave him that freedom [to improvise].”

“He blew me away when I saw that. I thought it was incredible,” Hindle added.

The shot that ends the sequence is as alien as all the colorful dancing that proceeds it: the core four workers united, relatively centered in frame and — crucially — not segmented by any aspect of Hindle’s design. 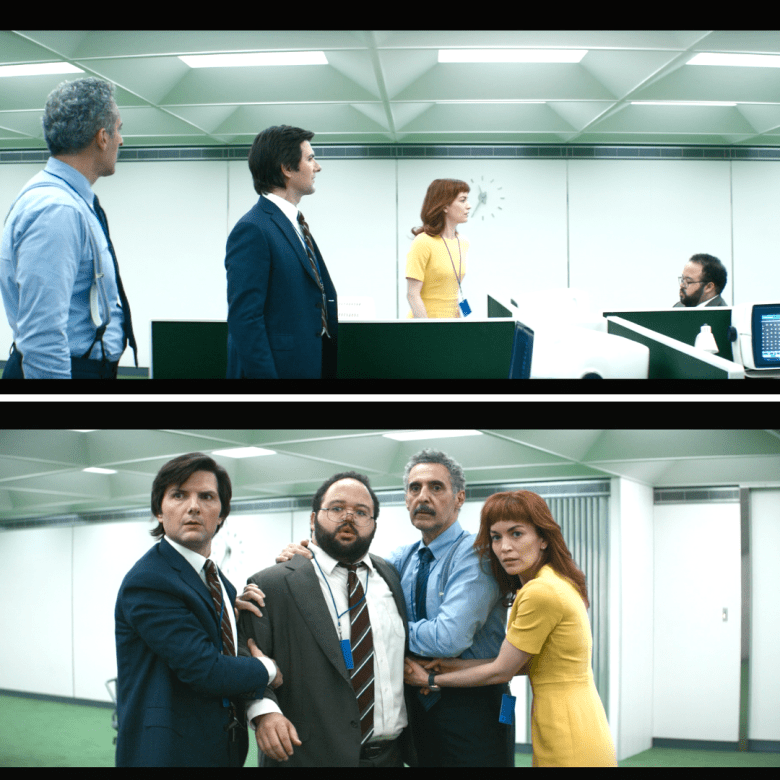 The MDR team coming together in “Severance”

Gagné credits the writing and the focus on Dylan as the inspiration for the stylistic changes, but no character can go back to who they were before the party. The Musical Dance Experience is a hinge point, and the defiance of jazz will mark whatever choices the MDR team makes in the final two episodes.