The four film actors who won top honors from the Screen Actors Guild last year all went on to win the Oscar.

So did the four who won the year before that.

With this in mind, and the knowledge that actors make up the biggest voting branch in the academy, at least some of the winners at Sunday night’s SAG Awards should feel confident about repeating their victories at the Oscars next month.

Take Glenn Close in “The Wife” and Rami Malek in “Bohemian Rhapsody”: After both added SAG trophies to Golden Globes they already picked up, they should be considered leading contenders for best actress and best actor.

[Fill out your Oscar ballot here.]

Ditto Mahershala Ali, who won the SAG Award for best supporting actor for “Green Book” on Sunday and, after winning the same award two years ago for “Moonlight,” joins Daniel Day-Lewis as one of only two men to win more than one SAG Award for film acting. Ali is now almost certain to take the Oscar in that category.

But what of Emily Blunt, who won the supporting-actress SAG Award for her work in “A Quiet Place” but has yet to score even her first Oscar nomination? The fact that the academy continues to snub this popular performer may explain why the actors guild rallied to her defense, but it’s also another sign that the supporting-actress category offers one of this year’s most unpredictable races. 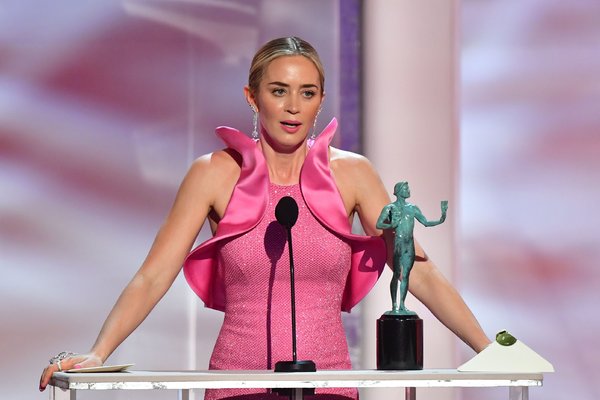 “If Beale Street Could Talk” star Regina King has taken home two televised awards in this category — the Golden Globe and Critics’ Choice Award — yet was not even nominated by SAG or Bafta, the British awards group that many consider to be an across-the-pond analogue to the Oscars. The only performer to ever win the Oscar despite snubs from those two groups is Marcia Gay Harden for the 2000 biopic “Pollock.”

That would seem to open up a path to victory for Amy Adams, who has earned six Oscar nominations in her career and is recognized again this year for playing Lynne Cheney in “Vice.” She has never won the Oscar and most pundits expected that with King not up for a SAG, Adams would at least take that prize on Sunday. For Adams to still lose to Blunt may indicate that while she is well-liked by her fellow actors, Cheney isn’t the role they want to give Adams the Oscar for.

There is still one more crucial stop on the way to Oscar, and that is the Baftas on Feb. 10. Adams may finally take that award, given just two days before Oscar voting begins, or the race may throw us another curveball: Many Bafta voters have told me they are inclined to reward Rachel Weisz for “The Favourite.” No matter how locked up the other three acting categories appear, at least the supporting-actress Oscar race will keep us in suspense until the end.

The same goes for best picture. Around half the time, the SAG winner for best ensemble goes on to win the top Oscar, but two of this year’s biggest best-picture threats — “Green Book” and “Roma” — failed to crack SAG’s ensemble category. It’s incredibly rare to win best picture without that key SAG nomination, though one of the two films to ever buck that stat came just last year with “The Shape of Water.”

SAG gave its ensemble award to “Black Panther,” the Marvel Studios phenomenon that recently became the first superhero film nominated for the best picture Oscar. Is that enough for “Black Panther” to cruise to the same Academy Award win? I’m inclined to say no, because it’s borderline impossible for a film to win best picture without nominations for director, screenplay or any cast members — all categories “Black Panther” couldn’t penetrate.

Still, this is a wild, anything-can-happen award season, and even the two presumed front-runners come with significant baggage: No foreign-language film has ever won best picture, potentially limiting “Roma,” while “Green Book” has had to weather more controversies than any other contender and missed out on a best-director nomination.

So the race remains fluid, especially because two other best-picture candidates — “A Star Is Born” and “BlacKkKlansman” — were nominated by the most industry guilds, signaling strong across-the-board support even if both films have still struggled to notch a high-profile win. In a year when the particulars of the Oscar ceremony itself seem impossible to pin down, perhaps it’s fitting that the best-picture race remains equally confused.