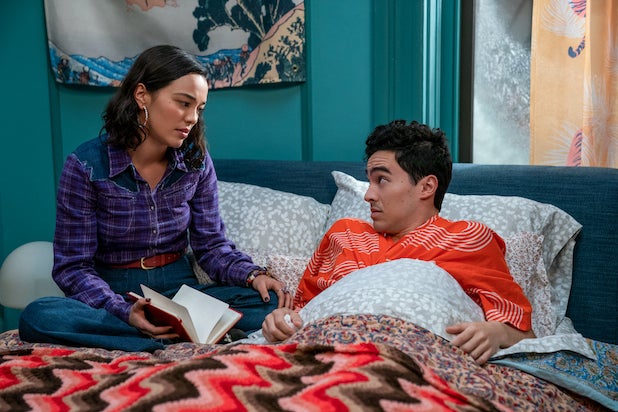 (Warning: This post contains mild spoilers for Netflix’s “Dash & Lily” through its finale.)

Eagle-eyed “Dash & Lily” fans who have already binged their way through the show’s eight-episode first season know that while Dash (Austin Abrams) and Lily (Midori Francis) spend the show running around New York City at Christmastime, completing dares while they fall in love via notebook with a little help from their friends, one key character only makes it outside twice: Lily’s brother, Langston.

“No, you are as observant as I am,” Troy Iwata, who plays Langston, said of his character’s self-imposed house arrest over winter break. “On our first day, when we went through the script, I went up to (creator Joe Tracz), who wrote it, and I was like, ‘So Langston literally never leaves his room?’ And he was like, ‘Yeah.’ So I said, ‘Great, I have some ideas for costuming. Since he’s never leaving his room, I just want my entire wardrobe to be a variety of robes and turtlenecks.’”

Iwata said the “Dash & Lily” costuming department “definitely delivered” and he “definitely had a very comfortable time shooting,” which was done in a warehouse in Brooklyn, where he shot “in a beautiful set, in a beautiful bedroom in my robe.”

Langston left the house to go to a park with his sister and again at the end of the show to get back together with his boyfriend, Benny (Diego Guevara). But for the rest of the show, he’s just chilling in the family apartment, which is an amazing place by New York City real-estate standards.

“I was like, are Langston and Lily rich? And they were like, ‘No, I think they’re like middle class.’ I was like, but Lower East Side middle class? Cause that’s rich,” Iwata joked. “I will say, though, as wonderful as that apartment is, there was no bathroom (in that set). So maybe that’s why the rent was reasonable.”

Netflix has yet to announced renewal plans for “Dash & Lily,” which launched Tuesday, and Iwata said he obviously has “no power” over whether or not it does.

“But David Levithan and Rachel Cohn, who wrote the ‘Dash & Lily’ books, they wrote three of them and they’re really wonderful books and I believe in our show and I approve the message of renewing ‘Dash & Lily,’ even though I have no power,” he said.

And if it does get picked up for a Season 2 — FYI, co-star Abrams told TheWrap he’s signed on for more potential seasons — Iwata is adding a new demand to his list.

“If it were renewed, I would have it in my contract that Langston leaves the apartment,” the actor said. “Because he’s gotta get it together.”