As the flames lashing the fictional world of Westeros flicker out around the last two pieces on Game of Thrones' blood-soaked chessboard – mad queen Daenerys Targaryen and uncrowned king Jon Snow – we are left with one lingering question.

Is GoT the GOAT? 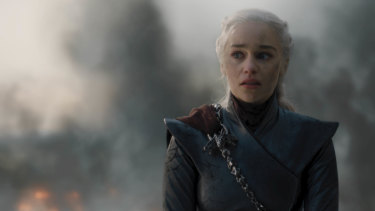 Emilia Clarke as Daenerys Targaryen in Game of Thrones.Credit:HBO

Many will be quick to proclaim it the Greatest Of All Time. But such an honour comes with one powerful caveat: HBO's magnum opus fantasy drama isn't the first television show to lay claim to the mantle and it won't be the last.

At different moments in our shared cultural history many television programs have burned out like supernovas, red hot fireballs of conversational dust and zeitgeist.

When it ended the legendary Korean War comedy M*A*S*H was undoubtedly the greatest show of all time. So too the gut-punching finish to The Mary Tyler Moore Show. And the brilliantly dark Seinfeld.

To that list we must add Aaron Sorkin's peerless political drama The West Wing. The incomparable The Wire. The Sopranos. Breaking Bad. Arrested Development. Twin Peaks. Deadwood. Curb Your Enthusiasm. The Crown.

And so you begin to see the emerging problem.

It is a question oft-asked of a television critic – what should I be watching? – as though the sometimes onerous task of wading through three decades worth of VHS tapes, DVDs and digital screeners somehow gives you the gift of second sight.

In the end, what all of those stories share, and what Game of Thrones delivers masterfully, is an exploration of power and human failure, amplified by the breathtaking scope of George R.R. Martin's world, adapted for the screen by D.B. Weiss and David Benioff.

For eight seasons it forced us to grapple with our darker selves, navigating the ethical web of Tyrion's decision to murder both the love of his life Shae and his father Tywin after their betrayal, contemplating the cost of Cersei's destruction of the Great Sept of Baelor – her son Tommen, consumed with grief, took his own life – and the horrifying decadence of the boy-King Joffrey, whose excesses led to his downfall.

In the most offhand assessment Game of Thrones could be described as Dungeons and Dragons meets Dallas, a description which sounds belittling but is not intended to be.

Dungeons and Dragons, the most successful fantasy role-playing game in the world, is a magnificent sandbox of fantasy tropes which can be rearranged infinitely like Lego bricks. And Dallas, the most successful television soap opera of all time, wove an unmatched who-shot-who tapestry of bloodlines and betrayal.

Filmed on some of the most sumptuously constructed sets in the history of television, and set to Ramin Djawadi's haunting soundscape, Game of Thrones is indeed the child of them both, from the stunning and brutal slaying of Ned Stark (Sean Bean) in the show's first season, to the Red Wedding, a massacre which places Game of Thrones on the same sanguineous pedestal as Dynasty, which infamously shot its 1995 royal wedding in Moldavia to pieces.

The counterargument will run that Game of Thrones, once magnificent, has crashed towards its finish, a bruised and confused masterpiece, having taken so many missteps in its final approach that the tyres will surely burst the moment it hits the metaphorical tarmac.

Great art is a transaction between artist and observer, and it is the job of great art to provoke.

Michelangelo's The Last Judgement offended Counter-Reformation Catholics with its depiction of the second coming of Christ, and Chinese artist Ai Weiwei's 1995 work Dropping a Han Dynasty Urn, in which he literally dropped and destroyed a 2000-year-old ceremonial urn, left art critics speechless.

For a more modern audience, Seinfeld and his apostles George, Elaine and Kramer were, in the final analysis, revealed to be despicable people – or were they? – and David Chase's The Sopranos faded brilliantly to black, leaving its fans confounded and bickering.

So when Game of Thrones leaves us broken and divided, arguing over whether the final season was a fitting end to an extraordinary story or simply a shambolic and unfocused stumble over the finish line, it is not a failure, but a success.

And as a consequence Game of Thrones is confirmed, not just one of the greatest of all time, but first among equals.

The final episode of Game of Thrones airs on Monday at 11am on Foxtel.