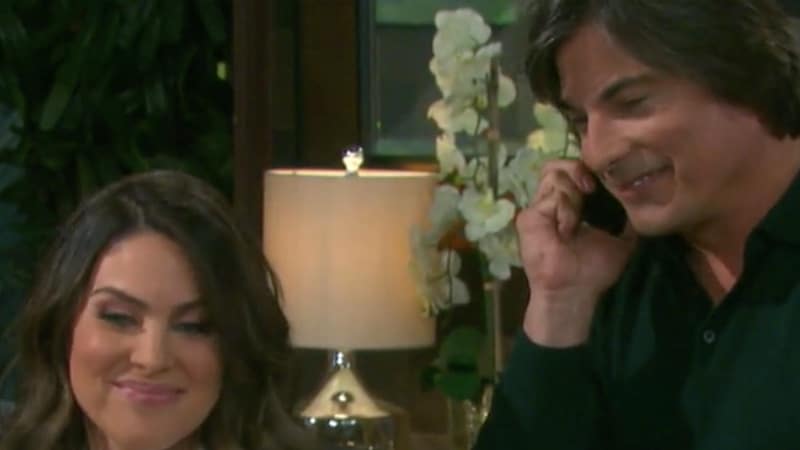 What should fans who have been on an emotional roller coaster with Lucas, leaving Days of our Lives several times in the recent past, think of his latest departure? Is it permanent this time around, just temporary?

Yesterday Lucas (Bryan Dattilo) popped back up into Chloe’s (Nadia Bjorlin) orbit, and she wasted no time telling him how happy she was to see the wanderer.

Whoa, not so fast! Lucas put the brakes on her enthusiasm, dropping the bombshell that he’s only there to pick up his things. Apparently she’s not one of them!

He needs to be with his young daughter Allie in Europe who needs him. How long will he be gone this time around? Let’s just say it’s a one way ticket. But, that doesn’t necessarily mean what you think it does!

Salem is his home, Lucas informs Chloe. Still, he doesn’t ask her to join him. A girl can only wait so long, and it looks like there  could be a new white knight on the horizon for Chloe. She commiserates to Brady (Eric Martsolf) about Lucas’ plans and these two clearly have chemistry, not to mention a past. Brady scoffs at Lucas for leaving the beautiful brunette and calls him a fool.

What are the chances these two are under the mistletoe sooner rather than later?

Still, we haven’t seen the last of Lucas. He will appear once more on Tuesday, December 11. And according to Soaps.com, the soap vet is taping new scenes as we speak, that will air in May (sweeps month) 2019.

We can see it already! Lucas changes his mind about Chloe, comes back to claim her, but alas Brady is now tending her establishment—we are referring to the restaurant she runs with Julie, Doug’s Place!

Days of our Lives airs weekdays during the day on NBC.