The former glamour model, 40, has been under the knife numerous times and has had various different procedures done. 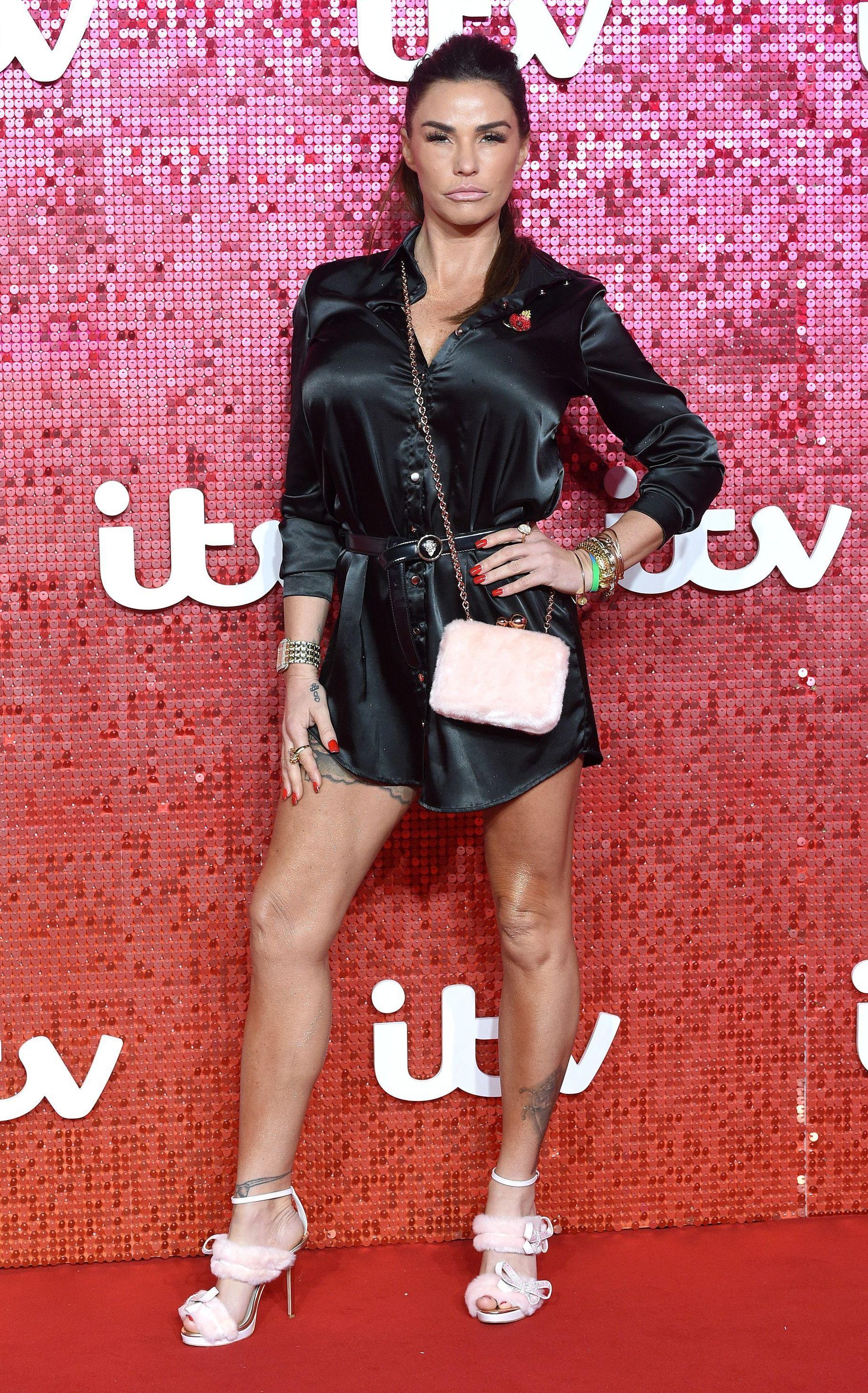 And, while the former Loose Woman is willing to share many aspects of her life with fans, there are some things she has chosen to keep private.

A Twitter user who goes by the name of ‘thedarkoverlord’ claims to have accessed pictures of Katie, as well as fellow reality stars Frankie Essex and Chloe Sims.

The person claims to have accessed the records of surgery clinic LBPS and is threatening to make the stars' photos public. 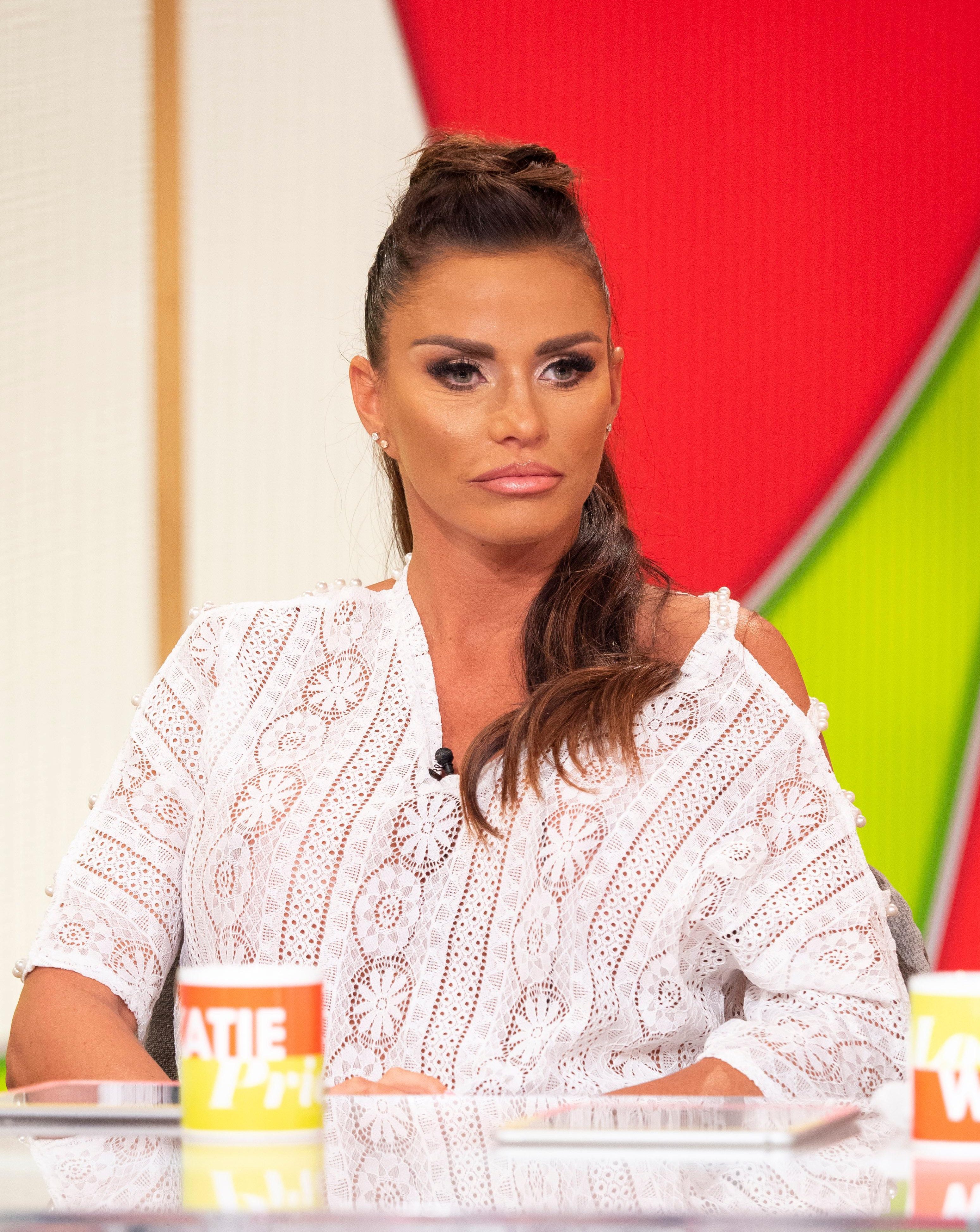 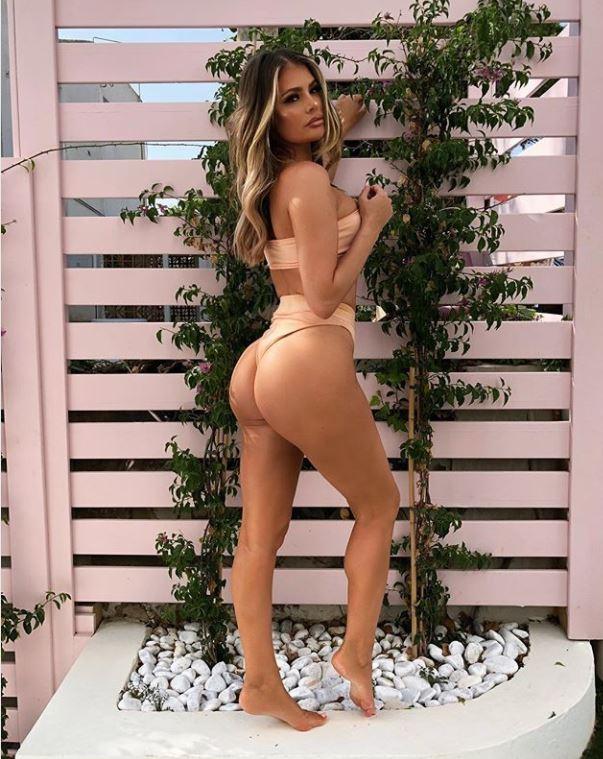 The Sun Online has contacted a representative for Katie for comment.

Reality star Katie recently shared a “horrific” video of herself undergoing a facelift during which she was conscious.

The Sun Online exclusively shared footage of the former glamour model speaking to the camera as a surgeon held up a huge flap of her skin. 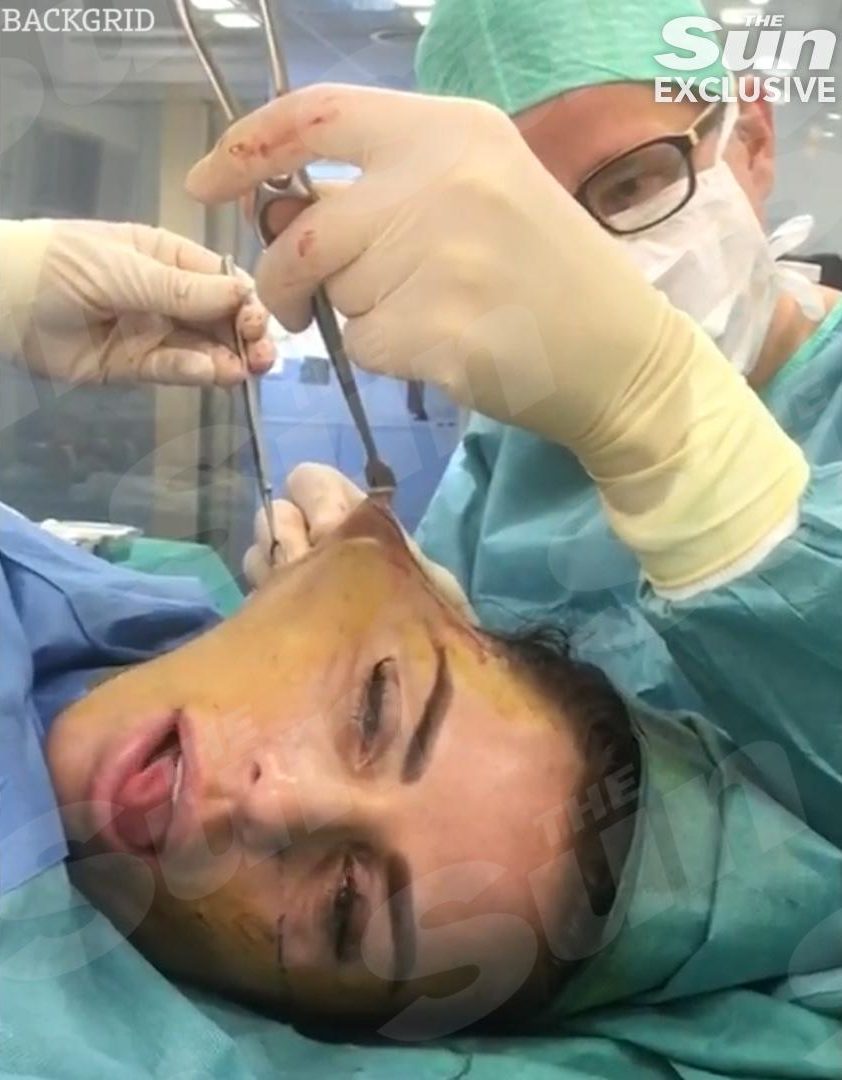 The 40-year-old star left fans feeling queasy as she chatted away while the medic conducted the surgery with two large metal utensils.

Taking to social media after watching the clip, one stunned fan wrote: "The video of Katie Price talking whilst she gets a facelift is horrific."

Another simply shared two vomiting emojis in response to the article.

A third wrote: "Just been sick after seeing pics of Katie Price's facelift. 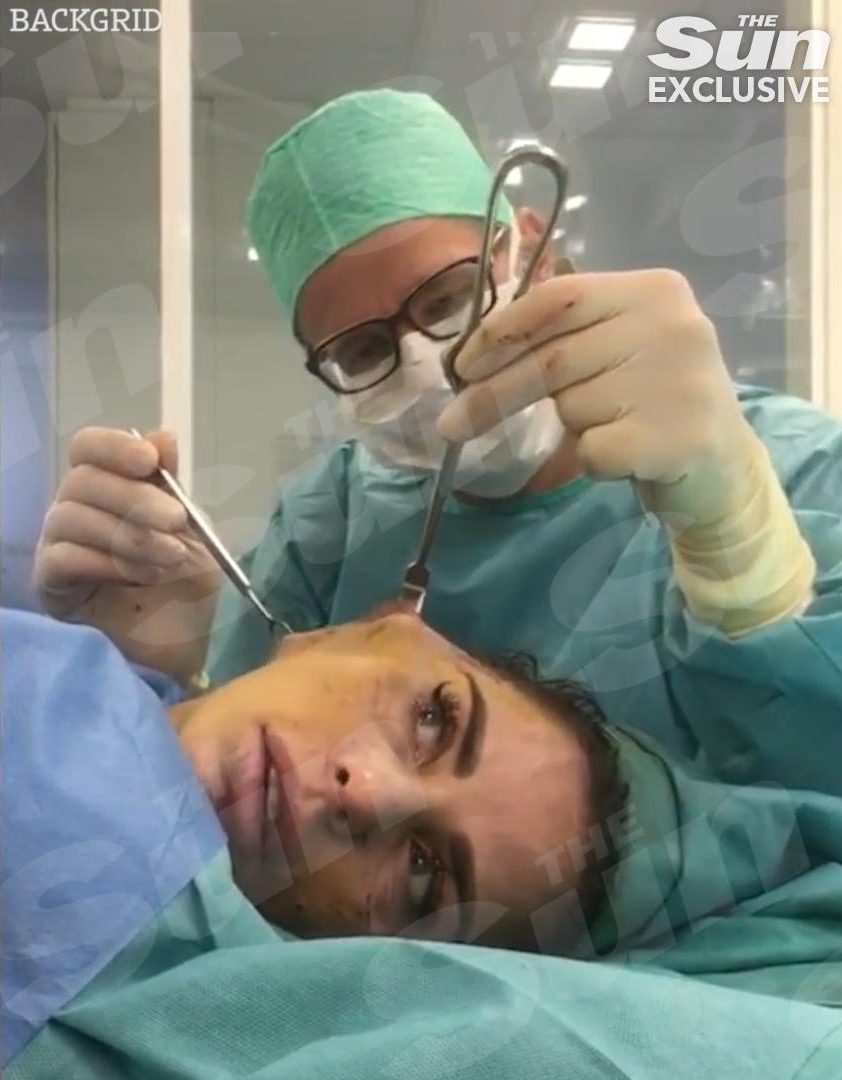 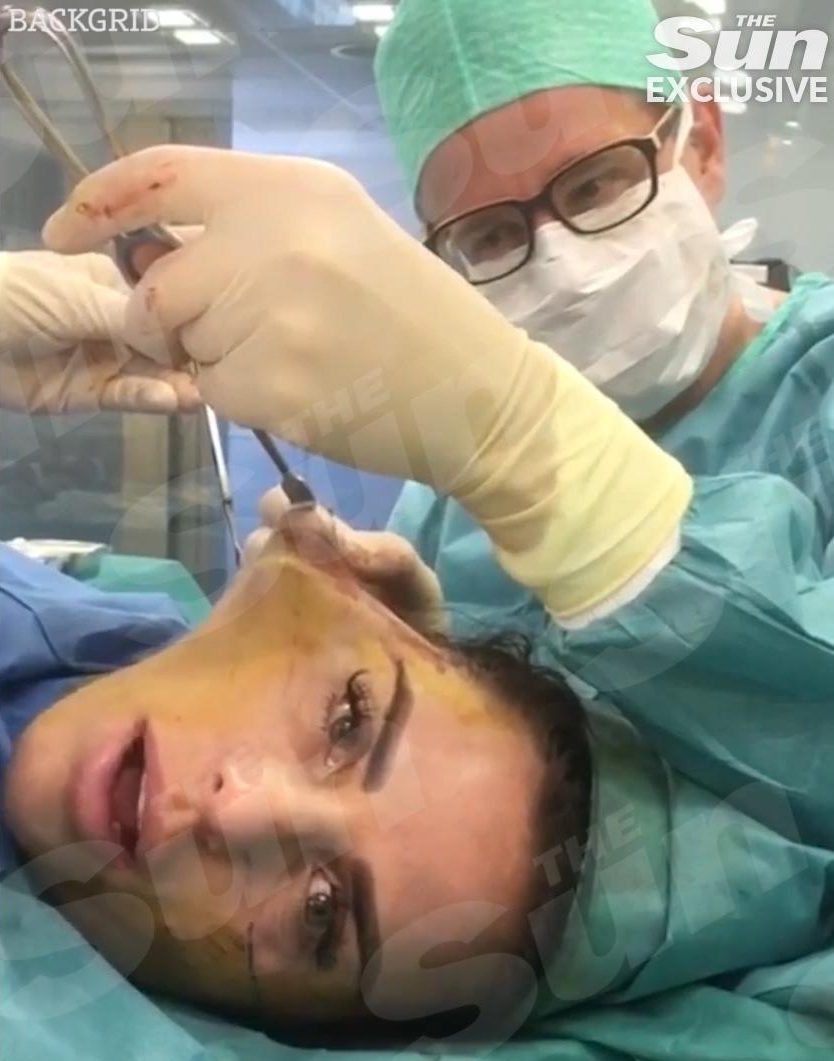 "That is so wrong showing that to the world. Sending the wrong message altogether to young women."

One fan compared the scenes to '90s comedy film Death Becomes Her – while another blasted Katie and her surgeon for conducting the op while the mother-of-five was still wearing make-up.

The critic wrote: "If Katie Price wants a facelift – go for it girl, you do you.

"But for the love of f*** if you are gonna film your surgery at least go to a real surgeon who enforces STERILE PRACTICE.

"Having open surgery with your makeup still on is DANGEROUS."

In the video, Katie slurs her words and her tongue lolls out of her mouth because she is heavily sedated, but she says she's "brilliant" and can't feel any pain.

"So here I am and I’m absolutely not in pain at all," she says.

"Even though my mouth is numb, I can’t feel a thing, it’s brilliant even though I’m talking too much.

"So you know how scared I am of needles? I’m needle-phobic. And obviously they gave me something to calm me down. But I actually can’t feel a thing!"

1998: Breast augmentation takes her from a natural B cup to a C. She also had her first liposuction.

2007: She had a rhinoplasty and veneers on her teeth this year.

2011: Then went back up to an F cup, and got body-contouring treatment and lip and cheek fillers done the same year.

2015: After an infection, she had her breast implants removed.

2016: But changed her mind and had more implants, Botox, and lip fillers.

2017: She then had her disasterous 'threading' facelift, and her veneers replaced.

2018: Katie went under the knife with Dr Plovier as shown in the video. 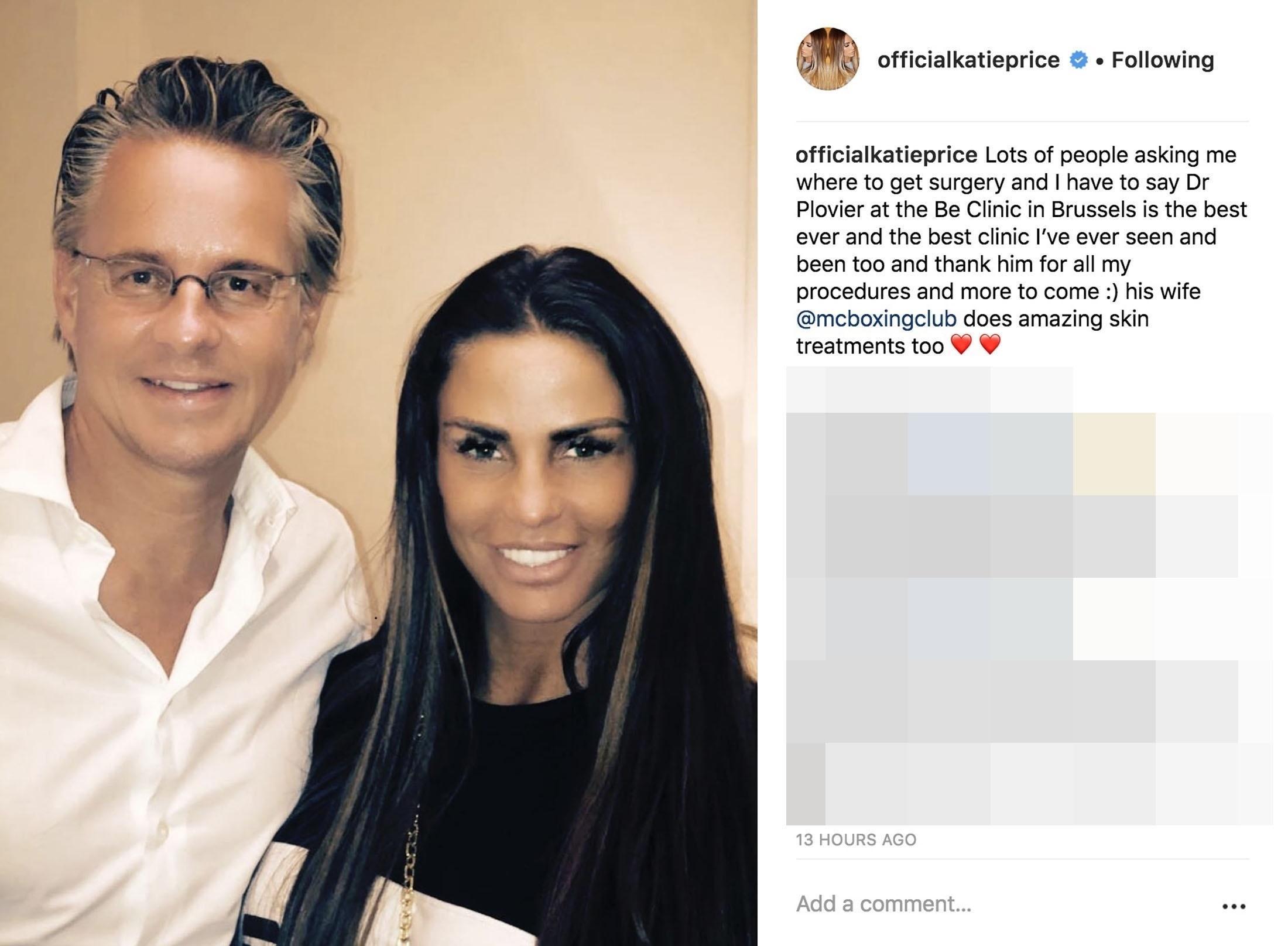 The star continues: "I’m dying to look at what he’s done. It’s amazing!

"So all you women out there who are afraid of being put to sleep and want your face done, this is perfect."

When she’s asked by the nurse if she’s ok, Katie replies: "Me? I’m perfect! But I’m numb, my face is numb. I haven’t felt a thing. Not one bit of pain.

"I was panicking because I wanted to be put to sleep and I can’t talk properly."

What is Katie Price's 'awake facelift'?

Katie is speaking while Doctor Frank Plovier completes the corrective surgery at the clinic in Belgium in March 2018 – which Katie later praised as "the best clinic I’ve ever seen or been to".

She told The Sun: "I asked the nurse in the surgery room to film the procedure as I wanted to show people that this can be done while you are awake and how important it is to go to professional places.

"Although it looks really gruesome it didn’t hurt one bit and it was actually the easiest surgery I have ever had done!"

Katie's suggestion that the video was an attempt to raise awareness of the procedure was questioned by one industry source who said: "Over the years Katie has profited from pretty much every aspect of her private life. 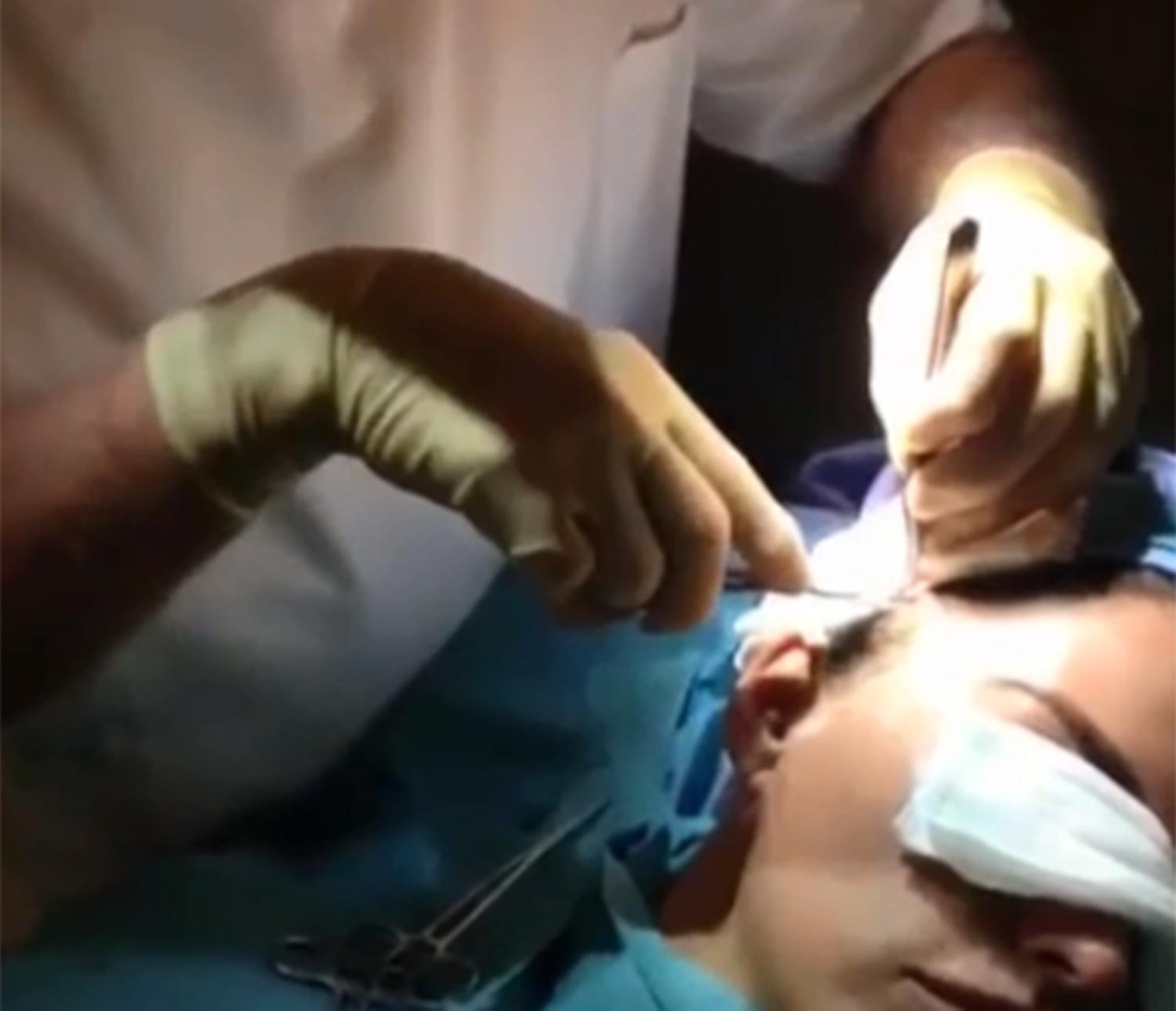 "On the face of it, this video seems like another money making enterprise. Although getting publicity and attention from a video like this might be her most unbelievable stunt ever."

Katie was forced to have this round of corrective surgery after a previous 'thread' facelift she got for free went disastrously wrong.

Katie previously said of the September 2017 surgery: "They cut a hole in the side of your head and pull the threads through.

"What that doctor did is he f***ed my face up. He put something under my eyes called tear trough and that made me look like I had puffy eyes.

"And every surgeon I spoke to said he shouldn’t have done that because it made my face go all funny. So Frank [Dr Plovier] had to take them out, and the excess skin he had to pull back.”

After Dr Plovier corrected that botched surgery, Katie told Loose Women that she’d never have an op on her face again.

She said at the time: "Choosing the right place to do the right procedure is vital. Maybe, with hindsight, I should have thought twice before jumping in. I wasn’t happy with the outcome last time and didn’t like the way I looked.

"This is the last time I will have surgery on my face."