This week on NBC’s La Brea, the survivors’ newly discovered neighbors did not roll out any welcome wagon, while Gavin got word (from a surprising source!) that time is running out to save Eve & Co.

IN THE LAND DOWN UNDER….

Upon arriving at the episode’s titular fort, the search party split into pairs (Scott/Lucas, Eve/Levi and Riley/Josh) to look around, finding no people… at first. Inside one structure, Levi and Eve found the (mummified?) body of someone from the Mojave mission — whom Levi revealed he has been tasked to seek out — ritualistically placed inside a “handprint” of stones (a la how Scott and Veronica found her wolf-mauled father a few weeks back).

While Riley and Josh discovered a door that accidentally deposited/locked them outside the fortress’ wall, Scott and Lucas came across an “armory” of pointed weapons — but just as they did, aggressive, English-speaking residents of the fort (“Forties”?) stormed in and roughed/tied the fellas up. Outside, many Forties descended upon their village, forcing Eve and Levi to hide inside a tent, where some English-speaking rugrats kept their presence a secret. Riley and Josh meanwhile retreated to crevasses between the rocks outside, eventually using a phone to play music/draw Forties away from the entrance. Sneaking back inside the fort, Riley and Josh reunited with Eve and Levi, and then Lucas and Scott (who had used a lighter to burn through their bindings), and they all sprinted to a hidden egress in a far wall, which had been revealed to them by the mop-topped grandson of Cyrus the grey-bearded elder.

After everyone else had slipped out to safety, Eve and Levi found themselves in the crosshairs of Cyrus’ bow, but a female leader emerged to order the grizzled elder to stand down and let the strangers leave. Who was this woman? More on that in a minute. But right here and now, I must ask: Why did Eve, Levi et al just calmly explain that they, as the Forties once probably did, fell through a sinkhole — “so, hey, can we all stop and compare notes?”)

Meanwhile back at camp, Ty used a pickup game of softball (someone found enough equipment for two whole teams!) to get Lily to open up/admit that Veronica wasn’t really her sister. (For those with the La Brea/Lost BINGO card, you may now cover Distract Selves With a Sport.) 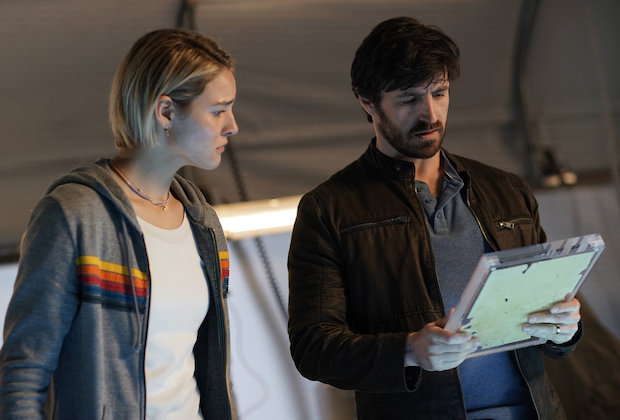 Asked to pilot the backup aircraft into the La Brea sinkhole, Gavin learned that Dr. Nathan’s fiancée was a part of the team lost years ago to the Mojave sinkhole (and now is the aforementioned “leader” of the Forties). Dr. Nathan heads back to her office to try to circumvent any security measures that might prevent Gavin (and co-pilot Dr. Aldridge) from flying into the hole, only to learn from Agent Markman that security has been amped up — since any subsequent breach could trigger a catastrophic earthquake.

Aldridge presses Gavin for a yes or no on piloting the mission, since they are running out of time. To prove her point, she choppers him and Izzy to an excavation site located in the same place as the La Brea survivors’ camp 12,000 years prior. Aldridge hands Gavin an aged, salvaged note which Eve wrote and left in a glass bottle, in which she observes that the “light” crack in the sky is closing — meaning, if Gavin doesn’t fly into the sinkhole now, he might never be able to. And even if he does, no one might ever be able to return!

What did you think of Episode 5, “The Fort”?