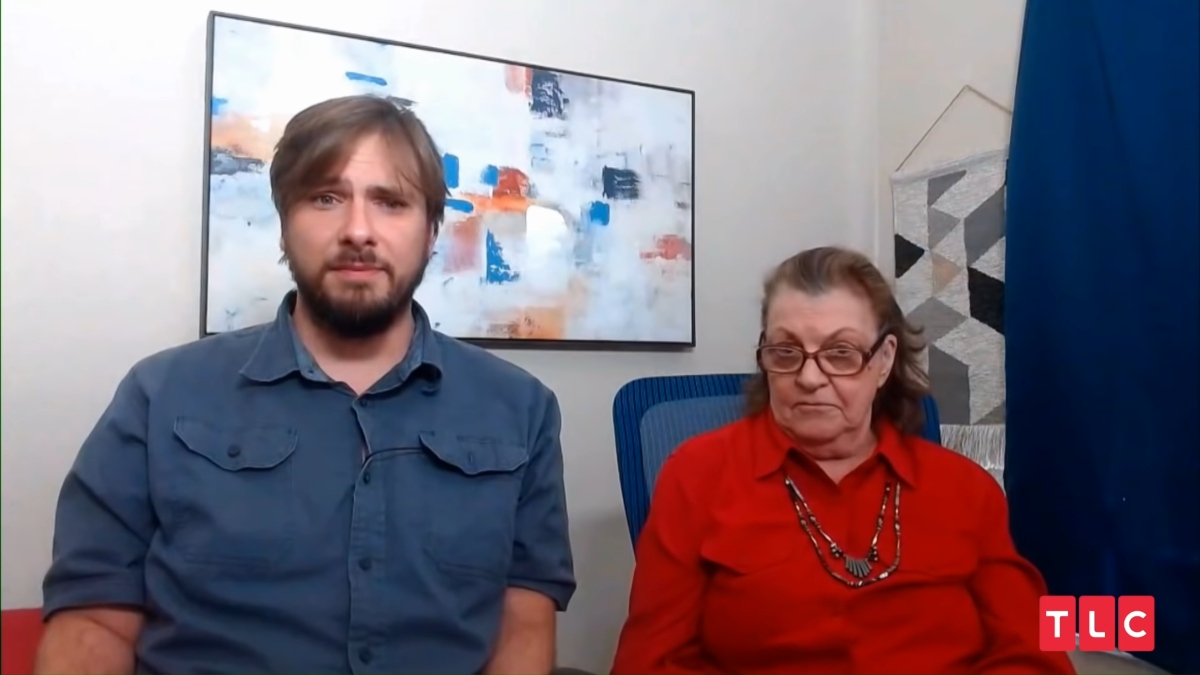 Certain parts of the 90 Day Fiance: Happily Ever After? Tell All were really awkward, especially the ones that involved Colt Johnson and Mother Debbie as they faced Larissa Lima, Eric Nichols, and Jess Caroline.

But even though shots were fired from all parties involved in this messy 90 Day Fiance love triangle (or square or pentagon), it was pretty clear that Colt-ee was hurting.

Colt has even admitted that he still had feelings for Larissa even after her third domestic violence arrest and after they were legally divorced.

After Part 3 of the Tell All ended, he shared an old video of Larissa in the kitchen.

“Here’s to you, @ larissalimareal,” Colt wrote, “Rest forever here in my heart, The last and final moments is yours. That agony is your triumph. I hope you are happy with your choices, both in life and on your self. To me you will always be the awkward nerdy girl that played #bloodborne.”

Here's to you, @ larissalimareal Rest forever here in my heart, The last and final moments is yours. That agony is your triumph. I hope you are happy with your choices, both in life and on your self. To me you will always be the awkward nerdy girl that played #bloodborne.

Here’s to you, @ larissalimareal Rest forever here in my heart, The last and final moments is yours. That agony is your triumph. I hope you are happy with your choices, both in life and on your self. To me you will always be the awkward nerdy girl that played #bloodborne.

Notice that he didn’t actually tag Larissa, leaving a space between the @ and her Instagram handle. It’s also worth noting that Larissa has removed all photos and videos of herself pre-plastic surgery from her own social media.

Carmen fires back at Colt in defense of Larissa

It’s pretty clear that Larissa’s friend Carmen was not impressed with Colt’s walk down memory lane.

In fact, the Brazilian beauty took aim at Colt again, bringing up a clip from the most recent season of Happily Ever After? where he awkwardly danced with Jess.

She wrote, “Now, Vienna sausage AKA Colt is trying to body shame Larissa posting an old video of her, he also tried to fat shame me last year, posting a frog picture with my name on the bottom. Gaslighting that never ends.”

“There is nothing wrong in women have few extra pounds,” Carmen continued. “But at least we lost weight and improved, while he still looks like a Teletubbie. This *sshole should use the money he got doing the show and get a surgery to get rid of his boobs and get a tummy tuck before trying body shaming women.” 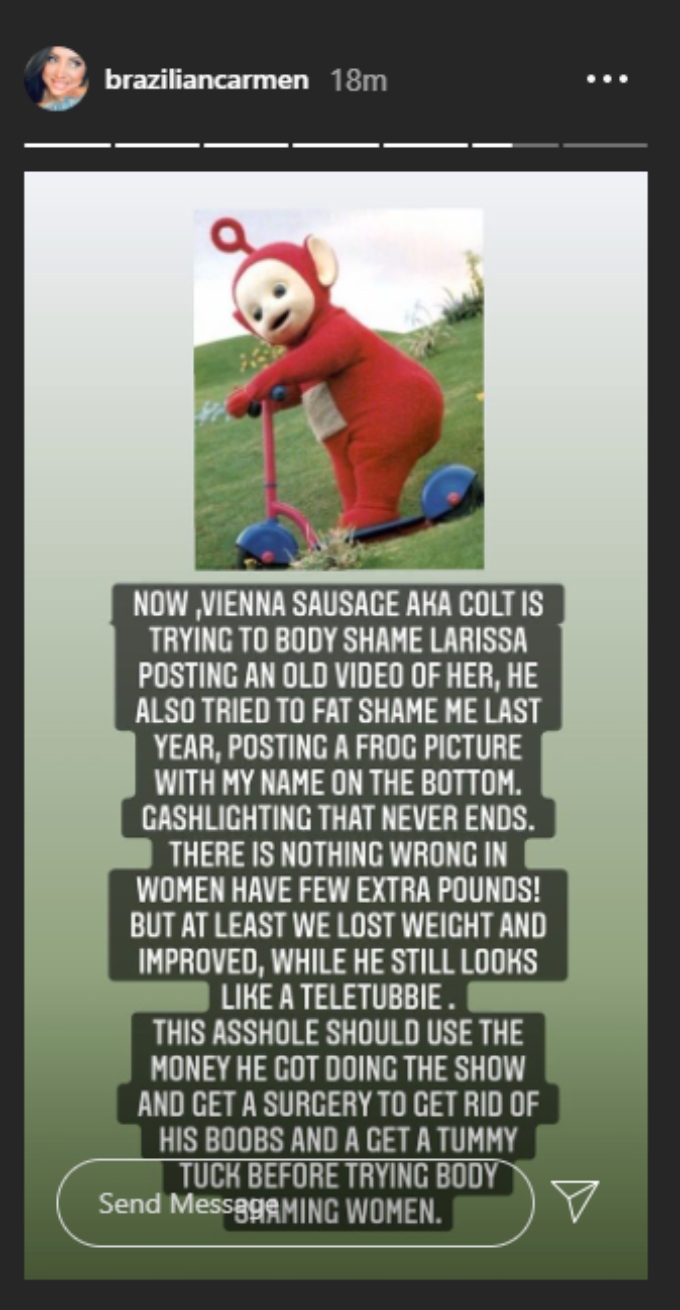 Her next post featured a video of Colt Johnson wearing a red t-shirt while he danced with Jess. She wrote, “Never forget his Teletubbie moves.” 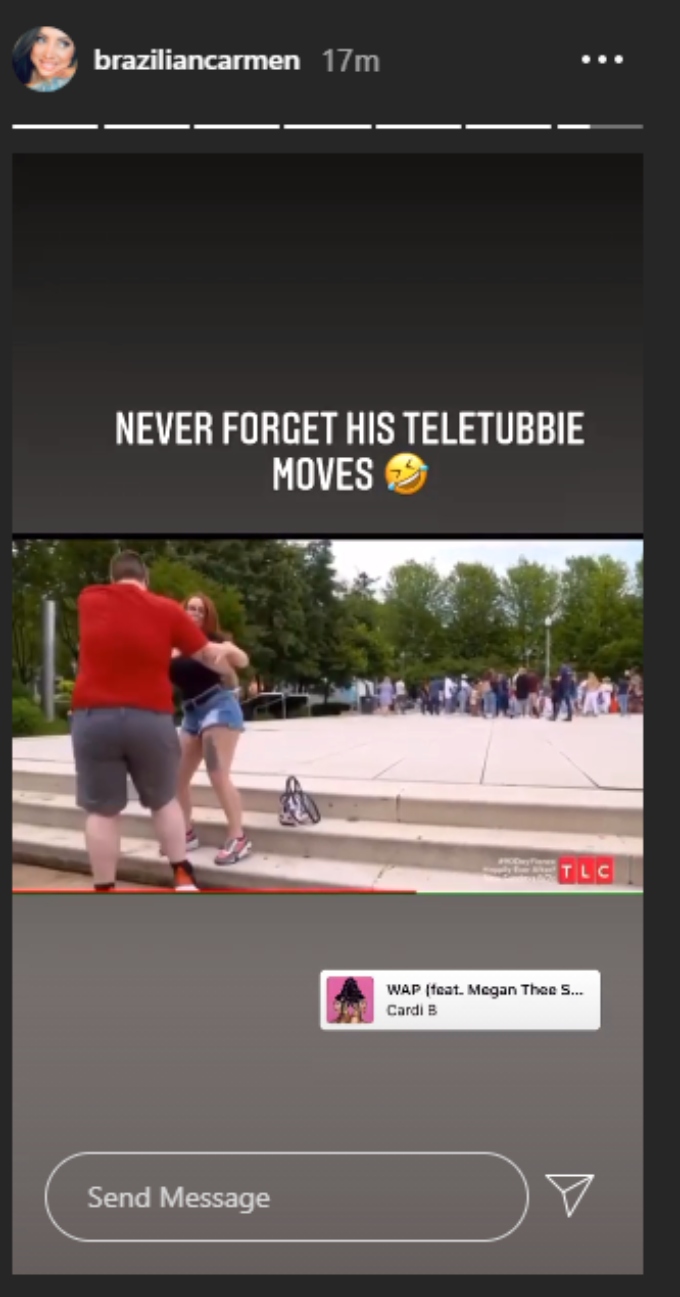 Everyone has moved on from Colt

It was painfully clear during the 90 Day Fiance: Happily Ever After? Tell All that all of Colt’s exes have since moved on.

Larissa is living in Colorado Springs with Eric Nichols now, and Jess Caroline is happily married to singer-songwriter Brian Hanvey.

Even Vanessa is said to have dumped Colt and moved on with another man even though he admitted on the Tell All that he was sleeping with Vanessa both before and after their relationship.

It doesn’t look like their friendship has ended, though. As the Tell All played out its final part, she posted a video featuring Colt and Mother Debbie, where he confessed to moving her into their home.