A man in a small space talking on a phone doesn't sound like a great subject for a film, so it's surprising how riveting it can be. Danish director Gustav Moller's The Guilty is set entirely within two drab rooms in an emergency call centre, where policeman Asger Holm (Jakob Cedergren) is serving out his last night shift before facing a tribunal for some unspecified breach of discipline the following morning.

The job demands preternatural calm, but it is a fair assumption that Holm is holding much more than the urge to tell the man who rings to complain that a prostitute robbed him that he got what he deserved. The camera fixes on his impassive face, his drumming fingers, occasionally on the backs of his ears. Even those ears look anxious. Then comes the call that counts: a woman in a car speeding up the middle of the country who tells him, while pretending she is speaking to her daughter, that she has been kidnapped. She can only say a few words, mostly yes and no. When she calls again, both we and Asger Holm start piecing. When he does, having called the relevant police stations and other agencies, he decides to take matters into his own hands – at least as much as is possible while sitting on the phone. 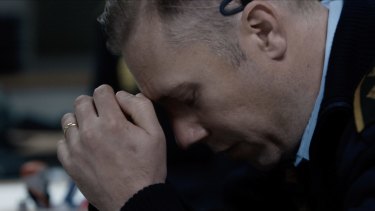 Danish cinema habitually punches well above its ostensible weight, but The Guilty has carried everything before it. A year ago, as a first film from an unknown film-maker, it was voted the best film in the Sundance Film Festival's World Cinema section. It went on to win awards at festivals from Rotterdam to Turin and was one of nine films shortlisted for the Oscar for best foreign language film. Although it missed the final cull to five nominees, Cedergren says the team was thrilled. "I have seen three of the five, masterpieces all of them, with budgets of I think $40-50 million or more," he says. "Just to be in there with the last nine has meant so much."

The first inspiration for The Guilty, Moller told web magazine Awards Circuit, came from a recording on YouTube of a real emergency call. "I was fascinated by how suspenseful a phone call could be. But mainly, I was fascinated by how I felt after I listened to the call. It felt like I had an image of the people and the places they were in." As the film shows, a computer shows the caller's location; the responders roam the country on the back of a cursor. Each scene is set with random sounds heard over the phone: slamming car doors, engines, endless Scandinavian rain. "The weirdest thing," says Cedergren, "is hearing these people's problems from all over the place." 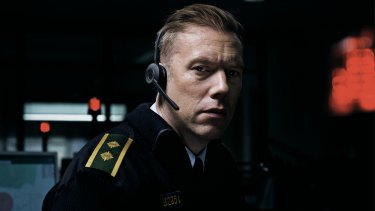 Cedergren became part of the film team six months before they started shooting, well before Moller and his co-writer Emil Nygaard Albertsen had a finished script. Like them, he spent a lot of time in real call centres. "I heard all kinds. A lot of elderly people: someone whose partner has suddenly become ill, maybe they have a heart condition; it is quite touching. On weekends you get a lot of people in the streets and discos, people who are drunk. They also played for me what you could call their greatest hits." A couple of these were incorporated, almost word for word, into the film; Cedergren was keen to include some laughs. "It kind of takes the load off, because there is so much tension going on."

Then there are the calls that are disturbed and disturbing, calls from the paranoid and delusional. The old hands are quick to recognise them, says Cedergren, because they tend to resemble each other. "The same kind of images come up – and not just here, but all over the world. It is like the paranoid often say the water tastes funny or the light is doing odd things; these ideas are archetypical, just as we have the same kinds of characters in our stories no matter what culture we come from" The call from the woman confined to a van – who is forced to hang up and then calls back after her abductor locks her in the back with his tools – is based on a real incident.

Filming took just 13 days in the office of a former factory. Every take was shot with three cameras; Moller wanted every shot to be as spontaneous as possible, so he wanted to eliminate the need to repeat things. The takes were very long – from five to 35 minutes – which created the highwire tension of theatre. Actors play other police on duty but Holm exchanges no more than a few words with each of them. The telephone calls came through live; the callers were in a small, dark, room five metres down the hall.

"It was like a radio drama," says Cedergren. "They were set up with a couple of chairs and some space so they could move around and do some body work." Moller would often sit with them, occasionally phoning in direction. "Or he would say to the voice actors 'don't call him yet, let him sit there for a while'. But then you're in it, so it's fine – because that could absolutely be the situation." At the same time, he has said, he wished most of the time that he could be in that room too.

As it was, he saw the other cast members only briefly in the morning. "I didn't hang out and have lots of chit-chat. That happens when you play this kind of character: you stay a little bit apart. It's kind of like tennis in between the games, you know. You sit and relax but you're not chatting." Asger certainly doesn't chat; he looks as if he arrives at work every day pumped with rage and guilt. "That comes from any job that has to do with life and death," says Cedergren. "Policemen, doctors, people who meet death and can't do anything about it; the guilt goes deep. And that's very isolating; you are very lonely with it. You just try to go on and say everything is fine, because you are in the middle of the problem and you don't want to see it."

The point here is that guilt is not the sole preserve of the miscreants on the end of the phone lines. "We are all guilty," Gustav Moller told the audience at the Rotterdam Film Festival. "I think the film tries to prove that guilt is something relative. Guilt, good and evil are often seen as very black and white, both in our society and in film. That's why we went with archetypes. We have a protagonist who goes against the rules, and normally when they do that in films, they are always right. A police officer who says 'I'm not doing what the system wants': as an audience we are tend to say that. The film tries to question this and to come up with something that is more like real life. And real life is super grey."