It’s been two days since Love, Victor‘s second season dropped on Hulu, and the fandom is divided between Team Benji and Team Rahim — but which team is Victor himself going to join?

The Season 2 finale almost gave us an answer to that question, but stopped agonizingly short of revealing which love interest had won Victor’s heart. What’s more, Mia’s dad’s wedding unfolded quite dramatically for every character — including Mia’s dad! — so let’s break down where they all ended up by the time the reception was over.

VICTOR | Having learned in Episode 9 that Benji doesn’t think he should attend the wedding with Victor anymore, Victor instead goes with Rahim and diligently keeps trying to convince himself that he and Rahim are just friends. But at the ceremony and reception, sparks continue to fly between them — even as they knock back some icky oysters — and both Rahim and Victor admit they’re having a great time together.

Over at Brasstown, Benji is forlornly looking at Instagram photos from the wedding… when Isabel shows up! She brings him a Tupperware full of the chicken dish she was supposed to serve in the season premiere, then apologizes for her awful past behavior, including any role she played in splitting up Benji and Victor. Benji counters that his and Victor’s problems run deeper than Isabel, and they’re too overwhelming for a couple of teenagers to handle. But Isabel tells Benji that all relationships have their problems, regardless of age, and what matters is how hard you fight for that love and commit yourself to improving it. 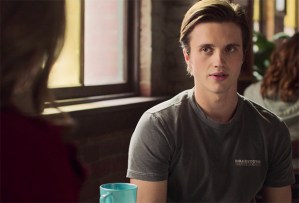 Isabel’s words seem to resonate with Benji, because later that evening, he shows up at the wedding reception, only to find Victor and Rahim sharing a romantic-looking slow dance. Victor spots Benji watching them, and Benji takes off immediately, remarking that he feels like an idiot for coming — and when Victor once again suggests to Rahim that they’re just friends, Rahim gets real and says his bond with Victor is more than friendly, “and I think you agree with me.”

“When we’re together, it feels like magic,” Rahim continues. “I’ve never felt more connected to someone in my entire life.” He leaves Victor with a sweet kiss — which Victor definitely does not resist — then tells him he’ll give Victor some space to figure out what (or who) he wants. “But if you feel the same way I do, you know where I live,” he concludes before leaving.

Victor goes up to Mia’s bedroom to clear his head, and there he finds Felix having his own love triangle crisis. Victor lays out his similar romantic situation, and Felix tries a technique that his mom learned in the psych ward: Victor closes his eyes, and Felix tells him to imagine all the future things he wants to do with his boyfriend. “Who do you see? Is there one person where it would kill you if you didn’t do those things with?” Felix asks, questionable grammar and all. “Actually, yeah,” Victor replies. “Yeah, there is.”

He leaves the wedding after that enlightening conversation, presumably to go profess his love to Rahim or Benji, then opts to simply jog all the way to his destination when he realizes how long an Uber would take. And just as he’s arriving, Victor gets a call from Simon (hi, Nick Robinson!), who’s been busy with finals and hasn’t responded to Victor’s latest DMs about the Benji breakup. But Victor happily realizes that coming out as gay has given him a much bigger support system than last year, when only Simon knew about Victor’s sexuality. “You have been so amazing to me,” Victor tells Simon, “but I think that I’m ready to figure out this next chapter of my life without you.” Simon agrees Victor’s ready for that step, but tells him not to be a stranger — and with that, they hang up, and Victor rings someone’s doorbell. The door opens, and Victor says, “Hi” with a smile… but we’re never shown who’s receiving that hello. Gah!

As for everyone else… 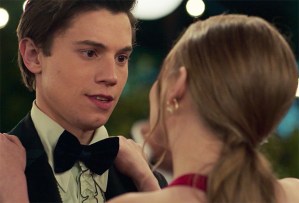 FELIX | Felix’s mom comes home from her psychiatric hold in good spirits, and newly committed to getting the help she needs in order to be around for Felix’s life milestones. And though she understands why Felix felt betrayed by Lake, she’s grateful to her son’s ex, who put her relationship with Felix on the line to make sure Dawn got the right care. Still, even as Felix and Lake look ready to rekindle things at the wedding that night, Felix becomes conflicted when he finds a package of Swedish Fish in his jacket that Pilar had bought for his mom. Then, after that visualization exercise he does with Victor that evening, Felix is sure: He wants to be with Pilar, after all, and returns home to seal the deal by kissing her.

No need to feel sorry for Lake, though! She looks fire in a red jumpsuit at Mia’s dad’s wedding, and she seems to have caught the eye of Lucy, Andrew’s ex-girlfriend. (On one hand, I feel strongly that Lake and Felix are MFEO. On the other? Completely here for this Lucy/Lake situation, which appears to take both women by surprise a bit.)

MIA | On the morning of her dad’s wedding, Mia learns that Harold accepted the Stanford job, after all, then promptly falls into an emotional funk for the entire ceremony and reception. At the end of the night, Harold knocks on Mia’s bedroom door, seemingly regretting his decision to take the job — but when he goes inside, Mia is gone, and there’s only a note sitting on her bed. We instead find her in the car with Andrew, who asks, “You sure you want to do this?” “Yep,” she tells him. “Let’s go see my mom.”

ISABEL & ARMANDO | Despite her best efforts to woo Armando with fried chicken, his new love interest Shelby never stood a chance: Armando and Isabel rekindle their relationship (see: make out in the doorway of Isabel’s apartment) before the finale is through.

With that, I hand it over to you! What did you think of Love, Victor‘s sophomore finale? Cast your votes in our polls below, then drop a comment with your full reactions!