Lucasfilm will hold talks with Game of Thrones creators David Benioff and D.B. Weiss to discuss the development of future Star Wars projects. 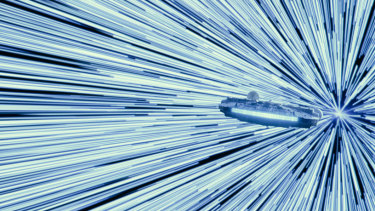 Will the Millennium Falcon encounter any space dragons next time round?Credit:Lucasfilm

"It's a nice time to take a pause," Kennedy told reporters at Star Wars Celebration in Chicago. "It's not only the perfect time – it's exactly what we had in mind. We wanted to have the time and not feel like we were rushing to meet a release date."

The release of director J.J. Abrams' Rise of Skywalker on December 20 will conclude the 42-year-old Skywalker saga that George Lucas started with the original 1977 Star Wars.

Disney and Lucasfilm have also released a pair of spinoffs including Rogue One and Solo, neither of which was as commercially successful as the films in the nine-part Skywalker epic.

Asked whether the Game of Thrones filmmakers tackling Star Wars would mean the possibility of space dragons, Kennedy laughed and said: "We'll see if we can't find a character like that."

The Last Jedi director Rian Johnson is also on tap to head up a future series of Star Wars movies. In the meantime, there are TV-based projects coming to the Disney+ streaming service.

The Mandalorian is the first live-action Star Wars series. It will star Game of Thrones actor Pedro Pascal and premieres with the launch of Disney+ November 12. A second show featuring Diego Luna's Rogue One Rebel spy Cassian Andor starts production next year.