Star Wars fans have been overwhelmed with personal details about the stars of the original film. Shortly before her death in 2016, the late Carrie Fisher revealed she and co-star Harrison Ford had an affair during filming. But Fisher also maintained a decades-long friendship with Mark Hamill. Yet, neither actor knew they worked together in a popular 2001 comedy. 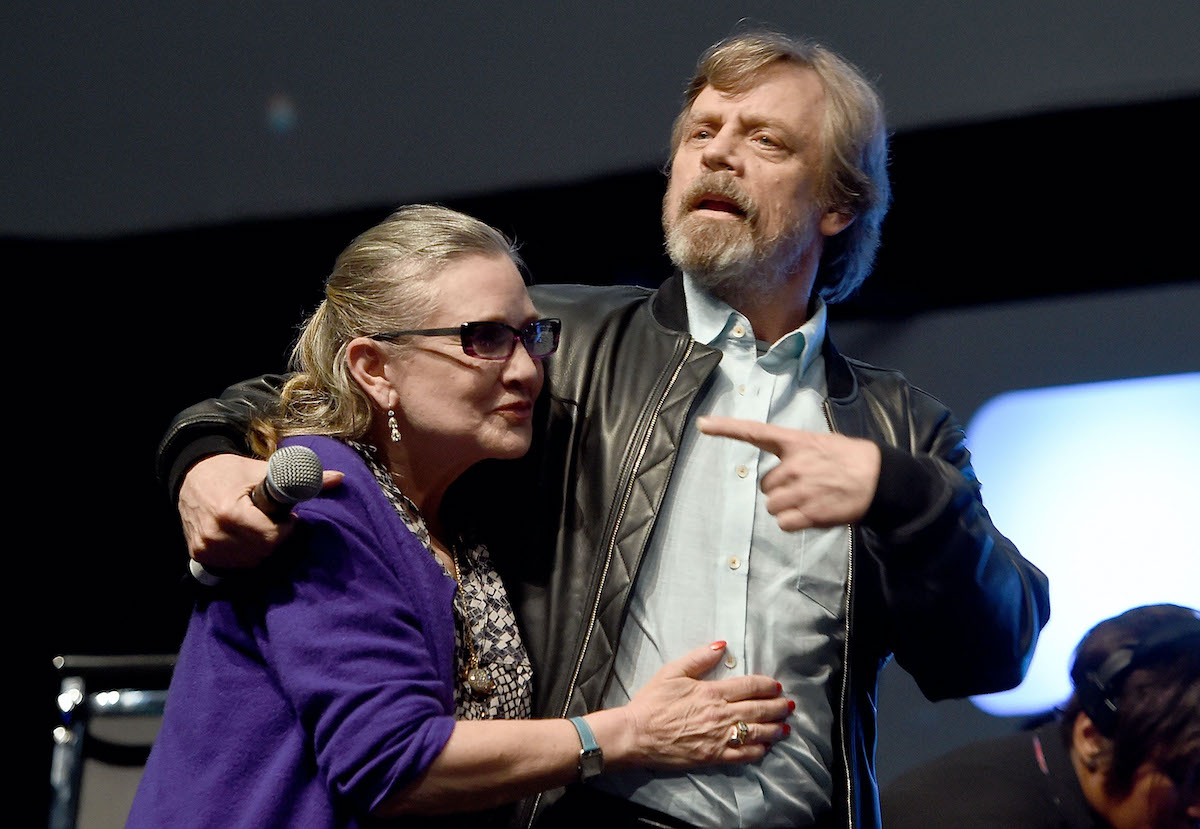 When George Lucas’ 1977 film became a hit, Hamill and Fisher found themselves linked for life. Not only did the pair — who played Skywalker twins Luke and Leia — reunite for the subsequent two chapters of the original trilogy. Because of the enormity of the Star Wars phenomenon, their careers became defined and intertwined by the “galaxy far, far away.”

Especially following Fisher’s sudden death, Hamill alluded to the unique bond he shared with his on-screen sister. He’s admitted to being “under her spell” during the production of the first film and the rollercoaster ride their friendship went on in the following decades. Yet, two of the biggest stars in the Star Wars saga also co-starred in a very different movie years later.

After Return of the Jedi, Star Wars fans assumed that Lucas’ space opera had run its course. So they never expected to see Hamill and Fisher in the same movie again. However, nearly two decades after the original trilogy ended, both actors popped up in 2001’s Jay and Silent Bob Strike Back. Writer-director Kevin Smith landed both actors for cameo roles in the movie.

But because Hamill and Fisher don’t appear on screen together, the actors didn’t know they were both in the movie until after production wrapped. Smith is famously a huge Star Wars fan. So for him, getting two of the three franchise leads for his own Strike Back was a huge win. And Hamill and Fisher’s roles in the raunchy comedy certainly surprised longtime fans.

Will other actors someday play Luke and Leia in the ‘Star Wars’ saga?

Of course, Star Wars fans got a much more fitting reunion between Hamill and Fisher eventually. Both actors reprised their roles as Luke and Leia in the recent sequel trilogy. And though they only share a single scene in those movies, their legacies remain intact. But will the Star Wars saga dare to recast either role as the franchise plots a very expansive future?

After all, rumors are swirling that young versions of the Skywalker twins could come into play on the Disney+ series Obi-Wan Kenobi. So it’s very possible Lucasfilm will cast child actors to play the characters. Sure, “the Skywalker saga” seemingly ended. And with Hayden Christensen returning, all bets are off. As Hamill’s Luke once said, “no one’s ever really gone.”