One of the nice things about 2018’s comic book lineup was that Marvel gave readers a bit of a break on the crossover event front. While they still published franchise-specific events like Spider-Geddon and Infinity Wars, there was nothing on the level of Civil War or Avengers vs. X-Men that dominated the bulk of Marvel’s output for months at a time. Like it or not, 2019 is not continuing that trend. War of the Realms is here, and it’s going to spill into many corners of the Marvel Universe in the months ahead. Fortunately, it has a solid backbone beneath all the usual event comic spectacle.

In fact, the biggest selling point with War of the Realms is the fact that it serves as the grand climax of Jason Aaron’s six-year-long Thor run. It’s all been building to this. Malekith’s slow consolidation of power now culminates in a massive invasion of Midgard. Worse, this invasion comes at a time when Asgard’s strength has never been weaker and Thor himself is still separated from Mjolnir. Where Asgard fails, it now falls on the Avengers to clean up this mess. 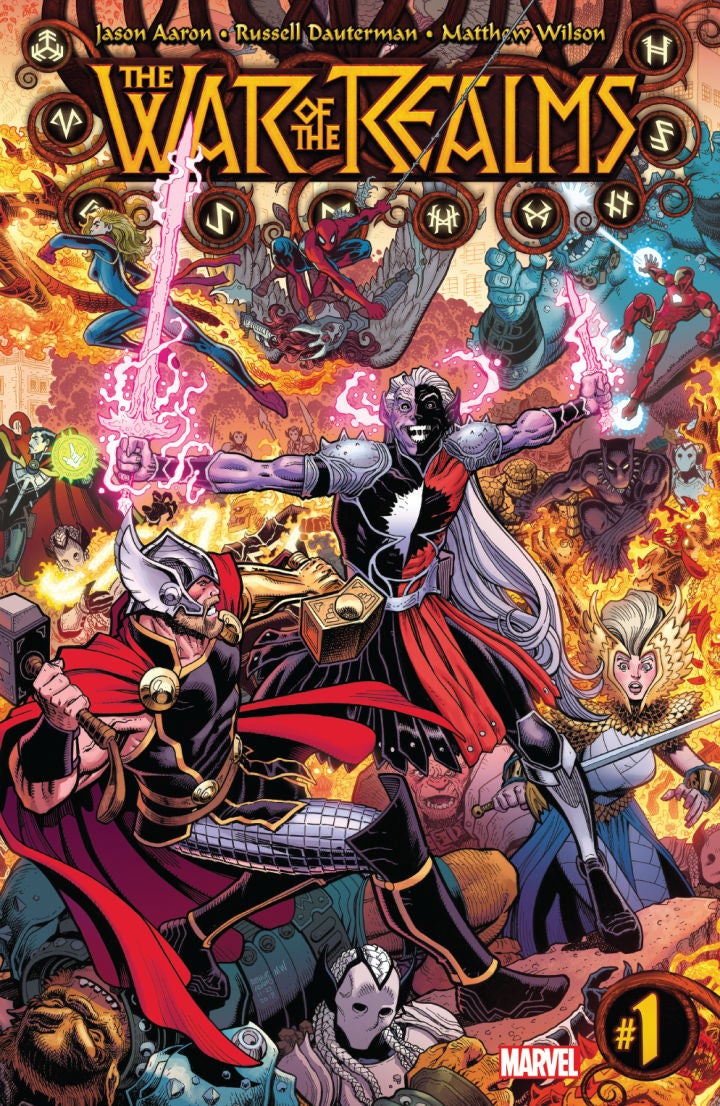 Fortunately, War of the Realms #1 reads basically like another chapter of Aaron’s Thor run. Too often, writers who excel on monthly books suddenly stumble and falter when it comes time to tackle major crossovers. Even Aaron himself wasn’t immune to that problem on 2014’s Original Sin. But here, apart from the added emphasis on outside heroes like Spider-Man and the Avengers, the tone and execution are right in line with Aaron’s recent Thor work.

It certainly doesn’t hurt that Aaron reunites with artist Russell Dauterman for this miniseries. Dauterman drew Aaron’s Thor run for the majority of the Jane Foster era and has come to define the look and feel of this sprawling epic as much as anyone. Dauterman doesn’t disappoint one bit as he and Aaron dive right into the thick of battle. Dauterman’s figures are dynamic and expressive. His pages are given all the scale needed to help this giant conflict come to life. And along with colorist Matthew Wilson, Dauterman is able to craft the ideal mood for this story. There’s equal parts superhero romp and dark, foreboding fantasy at play in these pages.

That’s not to say the execution in issue #1 is flawless. For one thing, many of the guest characters tend to blur together. The witty group banter results in a lot of interchangeable dialogue and characters who seem quippier than they would be normally. Spider-Man is, thankfully, an exception to that problem. There’s plenty of fun interaction between Spidey and the Asgardians, none of whom are much impressed by the mortal who shrouds himself in the image of the spider. And it goes without saying that Aaron has a firm handle on Thor and his eclectic supporting cast.

The larger issue is that War of the Realms doesn’t have the same deep, emotionally resonant underpinnings that have defined Aaron’s best Thor work. In a lot of ways, issue #1 follows a very typical event comic formula. A deadly new foe emerges and the many heroes of the Marvel Universe band together to confront that existential threat. Even with a couple tragedies along the way, the conflict in War of the Realms is pretty straightforward, surface level fare right now. No doubt this story will grow more complex as it develops and the numerous tie-ins come into play. But will it be enough to give Aaron’s Thor epic the rousing finale it deserves?

Marvel’s latest crossover event is a no-brainer for anyone who’s been following Jason Aaron’s Thor run these past six years. war of the Realms serves as the culmination of that story even as it drags the rest of Marvel’s heroes into conflict with Malekith and his armies. But while this first issue is tightly paced and gorgeously rendered, it doesn’t deviate much from the standard event comic path. War of the realms needs to dig a little deeper if it’s going to give this Thor epic the finish it deserves.