MasterChef: Stefan makes it into the semi-finals

MasterChef fans were outraged this evening when Stefan joined Mike in the semi-final. They claimed fellow contestants Stan and Katie were “robbed” of a place in the next round after architect Stefan produced “slimy” squid for this evening’s dish which was inspired by their favourite holiday destination. Judges and presenters John Torode and Gregg Wallace claimed Stefan’s “culinary mind” was something they “had never seen before”.

Those watching at home saw the MasterChef voiceover lady explain the various elements of Stefan’s dish.

She said: “Portuguese beach-inspired dish is suvied squid, with a squid and bone marrow risotto, on squid and ham pate, squid in tuile on a crispy crouton, served with deep-fried baby squid, aioli, squid-ink sauce and a bone marrow sauce.”

“The bone marrow is wonderful going through your risotto. I am not a fan of that squid tube cooked in a water-bath, for me it’s tender but the texture of it’s slimy.” 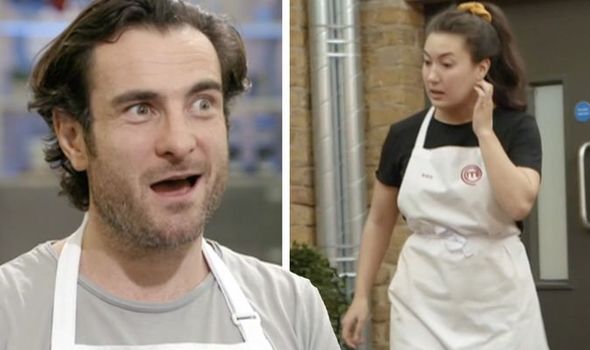 “I do agree with John, that this suvied piece of squid has actually only rendered the piece of squid unmemorable. I do really like the great crouton and I think it’s lovely with the pate you’ve made there,” guest judge William Sitwell – who is one of the UK’s toughest food critics – said.

“The deep-fried bits of squid were great and it is like that appetiser that you could be having at a bar, by the sea and it’s just crying out for a dry white wine which is part of what you had in mind.”

Gregg added: “Loads and loads of garlic which is fine by me. I like your tuile, it’s salty it’s got lots of the flavours of Portugal. It tastes great!”

Once everyone’s dishes had been tried, John and Gregg had to decide who they were going to send through to the next round.

They agreed Mike would be a semi-finalist and John said: “We’ve now got a discussion about Katie, Stefan and Stan.”

“Stan’s dishes – you weren’t particularly impressed, me and William, we enjoyed the flavours,” co-star Gregg said.

John explained: “He needed more spice, we had a pork skewer – they were big and tough – it wasn’t as vibrant as I would’ve liked it.

“Stefan has a culinary mind like I have never seen it before; it looked really interesting it was exciting.”

“The inside of the squid; it needed more cooking but everything else on the dish was delightful!” Gregg remarked.

“Katie – the issue with that tortellini is the pasta is too thick, but I liked the rest of it, I liked the flavours and presentation,” John claimed.

“Our second semi-finalist is…” Gregg teased and then revealed: “Stefan. Stefan, congratulations.”

On his exit, Stan said: “No regrets, I did what I could, obviously I would’ve loved to go further, but it wasn’t meant to be.”

Katie added: “Very few people get to cook for a world-renowned restaurant critic so I’m thinking about all the good stuff right now – I’m very proud of myself.”

“This is a massive shock!” Stefan remarked. “MasterChef semi-finalist – unbelievable.”

And those watching at home also saw it as a shock and took to Twitter to comment on how they thought Katie or Stan deserved the place instead.

“#MasterChef Not Stefan should have been Katy,” someone else wrote and a fourth chimed: “Why has Stefan been put through over Katie or Stan? He served slippery squid ffs #masterchef.”

“Absolutely livid Stefan has got through there #MasterChef,” a tweet read.

Another added: “What a joke, 3rd time Stefan should have gone #MasterChef.”

“I think Stan should have gone through #MasterChef,” a viewer mentioned.