Michael Gove slammed by host for 'not answering' question

BBC Breakfast viewers saw Chris Mason join regular host Louise Minchin on the sofa this morning as the pair brought those watching at home up to date with some of the biggest news stories of the day. As ever, the pair welcomed a range of guests onto the show including Mr Gove and it wasn’t long before the intricacies of the Brexit deal were brought up into discussion. But when asked about the deal in question, Mason reminded the Cabinet Minister how MPs would only have “one day” to scrutinise the deal and was left unsatisfied with Mr Gove’s answer, having to repeat the probe on a further two occasions.

Mr Gove was one of the more prominent members of the Conservative party who led the Brexit campaign, alongside now Prime Minister Boris Johnson.

The deal is set to be debated in Parliament, later on, this week and today, Chancellor of the Duchy of Lancaster, Michael Gove, appeared to speak about what was to come.

The Minister for the Cabinet Office was probed about the Brexit deal ahead of a parliamentary debate in just two days time.

MPs will only have the opportunity to scrutinise the deal for one day before voting on whether to agree with the terms – something the host was keen to address. 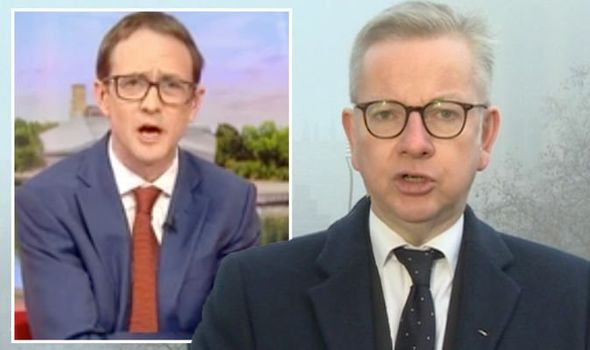 We will use your email address only for sending you newsletters. Please see our Privacy Notice for details of your data protection rights. Dan Walker: BBC host pays tribute to sports hero Kevin Gearey

Mason began: “Okay, let’s talk about the Brexit deal and this encounter it has coming up with Parliament on Wednesday.

“The whole mantra around Brexit, the idea of taking back control, parliamentary sovereignty.

“Well we’ve been debating Brexit for four years almost,” Mr Gove reminded the host, with Mason noting: “Yes, but not the deal.” 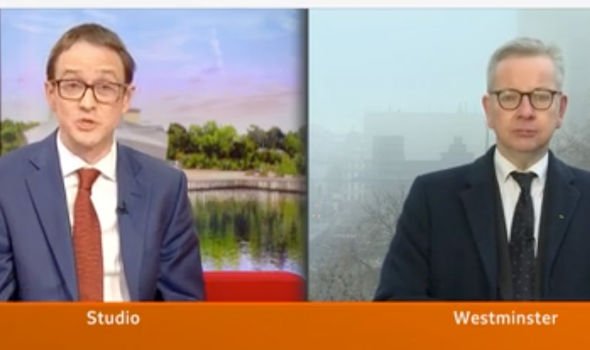 Mr Gove reminded him: “Well, we’ve been debating the outlines of what a deal should be and it sometimes seemed the Brexit debate would never end.

“The Prime Minister at the election said just over a year ago, if you voted for him, he would get Brexit done. He did, he took us out and then he secured this deal so we can now put the big political debates about Brexit behind us and concentrate on…”

But Mason interjected: “Sure, but that’s not an answer to the question I asked about scrutiny this week…”