"Can I just ask you a simple question?"

With those words television journalist Michael Willesee, who died on Friday, interrogating Liberal leader John Hewson in 1993 about the impact the soon-to-be-introduced goods and services tax would have on a birthday cake, turned the tide of an election. 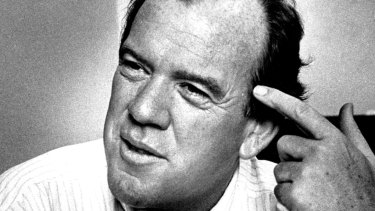 It was Willesee's trademark, the journalistic coup de grace, delivered in a cool manner, and with a very slight, wry smile.

Hewson fumbled his answer, and Willesee, baited by the scent of blood, moved in for the kill.

For decades Michael Willesee was a fixture in Australian journalism, as a reporter on the ABC's This Day Tonight and later the host of Four Corners, and then Nine's A Current Affair and, for Seven, the self-titled Willesee program.

As a television journalist, Willesee was a posterchild of his time: a collared shirt but no tie, smart without being inaccessibly suave and, when caught in the moment, battlefield weary.

It was a personality template that would be parlayed into the reporting caricature of Nine's flagship current affairs show 60 Minutes, though Willesee himself was not a member of its reporting team.

Willesee, and journalists like him, took television news coverage out of the studio, and into the battlefield.

Though it would later become a cliche, they pioneered a style of reporting from the mean streets of the urban jungle.

Perth-born, and street savvy, Willesee was a popular, if slightly polarising figure.

Commercial current affairs, an industry in which he flourished, was a combative business, but it was also frequently reckless, pushing the boundaries of what was acceptable in journalism.

In 1993, for example, Willesee drew widespread criticism for speaking to two children on air who were being held hostage by murderers Leonard Leabeater, Robert Steele and Raymond Bassett in a farmhouse siege in Cangai, near Grafton.

The incident was later satirised by the bleak media comedy Frontline.

"It's something I really don't regret," Willesee said in the aftermath of the incident. "I wanted and needed to make sure those children were alive and well."

In many ways, despite the criticism he took for it, the incident defined Willesee's style of journalism.

Unafraid to face his critics, Willesee invited them onto the program the following night to answer their accusations on national television. Few in the modern media, where hubris is plentiful, would do the same today.

Willesee also became famous for an aggressive style of interviewing which kept him at the top of his game for decades.

Sharp questions, and devastating pauses, were his tricks of the trade.

He famously sparred with Ma Anand Sheela, the Indian-born American–Swiss then-spokeswoman of the Rajneesh movement in an interview which entered the journalistic history books.

Willesee accused the movement of running a sideline in prostitution, and its leader of being a pimp. Enraged, Ma Sheela relatiated by calling Willesee "a worthless man".

"I am not running for cover, mister," she said. "I don't run for cover. And a person like you, make me run for cover? That's a joke."

In private, however, Willesee was a gentler figure. And, particularly in his later life, found a deep and profoundly affecting Catholic faith.

As much as he is remembered for his combative exchanges, he had rare authenticity which allowed him to connect both with the television audience, who were loyal to him, and with his interview subjects.

One of his best remembered interviews was with the then very young Quentin Kenihan, a young boy suffering from osteogenesis imperfecta, whose life was lived under a great deal of media attention.

The interview gave rise to a strong bond, and a lasting friendship, between the two.

Though television has given rise to many imitators, few have matched Willesee for either tenacity or precision of strike.

Perhaps the most profound footnote to his journalistic life is that the modern media likely never will.

"The word legend is somewhat too readily conferred in modern times but it describes Mike to a tee," Nine CEO Hugh Marks said of Willesee. "His particular skills as an interviewer are unarguably the stuff of legend."

"When others spoke too much, he said only what was necessary; the short, sharp question which everyone was thinking but no-one dared ask," Marks said. "He had a mind as sharp as a steel trap and a sense of humour as cheeky as his smile."

Marks described Willesee as a "modest and humble man; a big friendly bear of a man who worked hard and, back in the day, played even harder.

"But he was always a gentle man, generous and caring of others. Everyone who practises journalism in Australia is in his debt," Marks said