In this round-up, our reviewers look at a handful of movies released this week, from big blockbusters to foreign, local and sometimes obscure films that deserve some of the spotlight. Which ones are worth the cost of a ticket?

Filmed in Queensland, Danger Close: The Battle of Long Tan replicates a day in the Vietnam war when 108 young and inexperienced Australian and New Zealand soldiers fought for their lives against 2500 North Vietnamese and Viet Cong soldiers. Starring Richard Roxburgh, as Brigadier Oliver Jackson, and Vikings' Travis Fimmel as Major Harry Smith, the film was given the seal of approval by surviving veterans at a preview screening in the Gold Coast in July. Reviewer Paul Brynes too has strong praise for director Kriv Stenders, who "made the reality of the battle accessible and gripping for a non-military audience".

"War is hell, especially for filmmakers. The possibilities for drama are endless, but so are the problems, starting with the fact that most directors have never heard a shot fired. 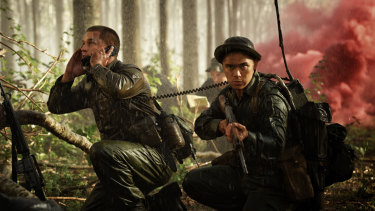 So movies tend to lie about war as they turn it into entertainment. They pull their punches, soften the horrors, resort to mawkish patriotism (if American) or mushy mateship with colourful lingo (if Australian).

Danger Close: The Battle of Long Tan is prone to some of these problems, but it does one thing extraordinarily well: it puts you there, in that rubber plantation in Phuoc Tuy province in August 1966, with the rain pissing down and 1000 North Vietnamese regulars trying to over-run a force of 105 Australian soldiers (and three New Zealanders) from Delta Company, 6th Battalion, Royal Australian Regiment. It does this with what appears to be accurate research and a commitment to clarity that is in itself unusual.

Where the movie is less sturdy is in characterisation, particularly in the key relationship between Harry Smith (Travis Fimmel) – a task-master and former commando – and a hot-headed farm boy called Private Paul Large (Daniel Webber). In one scene, Large physically attacks Smith, wanting to fight. Smith then goes out of his way to make him his new best friend, in scenes that may well be true but do not convince.

In the first 10 minutes, when establishing characters is so important, the movie gives us the barest bones, so that we struggle later to remember who's who. Of the Vietnamese, we get nothing like characterisation: they are just numerous beyond belief, dying by the hundreds as the Delta boys fight grimly on, encircled and expecting to die. I thought perhaps these frontal attacks might be overstated so I checked accounts of the battle: they are accurate.

If it's not the most character-driven of Australian war movies, it's certainly one of the most intense. Those four hours in August 1966 were searing for all involved. Now finally, the rest of us are offered a glimpse of what happened at Long Tan that day, and the hideous human cost."

Not to be confused with the 1980 Australian drama of the same name, the newly released Palm Beach was the brainchild of director Rachel Ward and actor-husband Bryan Brown after a Christmas spent with three other couples, where the men were going through tough times late in life. Recruiting long-time friend Sam Neill and Richard E Grant to star alongside him, Brown's character Frank hosts a birthday party reunion in Sydney's northern beaches that doesn't exactly go according to plan. As reviewer Sandra Hall found out, Ward's Palm Beach is "a seniors' edition of The Big Chill".

"Ward is reluctant to break up the party and who can blame her? She's not the first director to gather a group of friends in a desirable location to make a film. 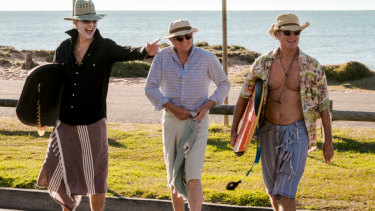 It's also clear that she's eager to share the pleasure they must have had in shooting the film. But too often this tribe of high-powered talents are left without enough to do. They need a script that can back up its interlocking sub-plots with a fast flow of incidental repartee but at best, we get good humour rather than wit. This means that those who have temporarily drifted to the sidelines are obliged to fill their downtime by serving as a merry Greek chorus gamely rhubarbing about nothing much. And not surprisingly, high spirits soon begin to subside into a forced and self-conscious attempt to maintain the jollity level.

The plot recovers its momentum just in time. The troublesome secret that has been simmering throughout finally comes to the boil and an abruptly applied dash of suspense brings the main sub-plot to a swift, if predictable, resolution. And in the wash-up, you realise that the film's charms have done their work, after all. You have come to care about these people.

A less likeable group of actors could easily have been upstaged by the conspicuous perfection of the setting and the décor. This bunch hold their own but a sharper script would have made them shine even brighter."

Having written for Saturday Night Live and produced her own comedy show, Mindy Kaling knows quite a bit about the business of TV. Now she has turned her hand to film with workplace comedy Late Night, starring Emma Thompson. Thompson plays the comical host of a failing show who turns to a younger female writer to save her career. How closely the film reflects Kaling's own experience remains to be seen, but late night stars Seth Meyers and Bill Maher lend some street cred by appearing as themselves. But for reviewer Jake Wilson none of it matters if the purpose was to glean a laugh. 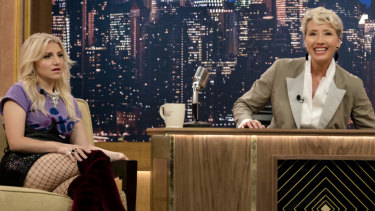 "Emma Thompson is funny, and always has been. But she doesn't much tap into her funniness as Katherine Newbury, the British host of a long-running American talk show in Late Night.

This is all the more disappointing given that Late Night is so plainly rooted in personal experience –though not so much the experience of Thompson or of director Nisha Ganatra (who, frankly, doesn't do much to differentiate the film from the average made-for-Netflix production).

Rather, the key player here seems to be screenwriter and co-star Mindy Kaling (playing Molly), who got her start as one of the writers of The Office, and who might be expected to know something about what being funny entails. 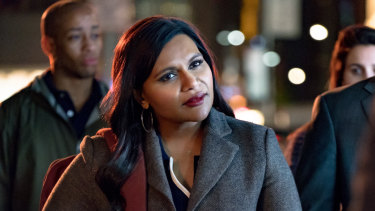 At least Kaling has the knack for writing characters who have two dimensions rather than just one, allowing scope for lots of good performances around the edges.

John Lithgow is at his gentlest as Katherine's dying husband, though he drops enough hints to let us imagine the different man he might have been in the past. Similarly, Amy Ryan as Katherine's boss suggests a complex history between the two women with a mingled wickedness and warmth that may make you wonder why she isn't playing the comic and Thompson the executive.

Ultimately, part of the point of Late Night seems to be that Katherine and Molly are twin souls –both depressives, both control freaks and workaholics, both rigid and awkward personalities in general. Whether two such people would do each other much good on any level is open to question. Still, I'm willing to accept this as an accurate picture of how comedians can be – which is not to say that the accuracy makes Late Night any funnier.

Midsommar is a US-Swedish "folk horror" set in a commune in rural Sweden, where American couple Dani (Florence Pugh) and Christian (Jack Reynor) travel to with friends for a festival that only occurs once every 90 years. The group finds themselves in the clutches of a pagan cult that believes in human sacrifices. Writer-director Ari Aster described the film as a pervert’s Wizard of Oz, but for reviewer Jake Wilson it could also be Aster's fantastical description of the sacrifices it might take to conquer Hollywood.

"Midsommar confirms that American horror specialist Ari Aster is one of the slyer jokers to arrive in the movie business for a while. 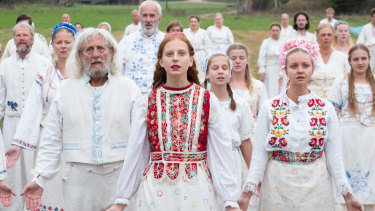 The unusually prompt follow-up to [his] chilling 2018 debut Hereditary, it’s superficially the opposite of its predecessor: a film of exteriors rather than interiors, sunny rather than sombre, and so on.

Yet it’s also the same film in a different disguise, a parcel unwrapped one layer at a time until we reach a truth that stares back at us like a grinning skull.

Horror is conventionally about what is hidden in the shadows, but Aster inverts our expectations on more than one level. In Sweden at midsummer, daylight is constant — and though certain aspects of the story are not unveiled until the climax, we can see in retrospect that much was out in the open from the start.

Even more than Hereditary, Midsommar lives on the edge where horror meets absurdity, prompting the kind of laughter that comes from not knowing how else to respond."