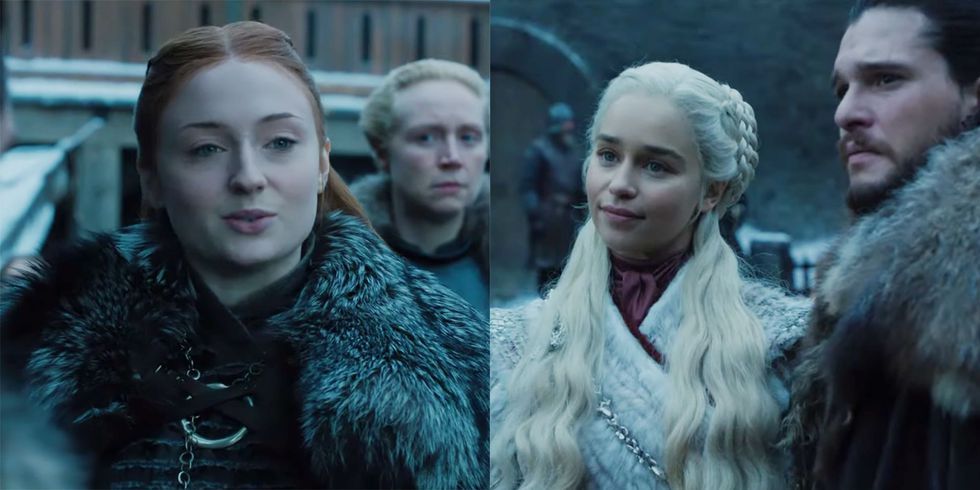 The first official footage of Game of Thrones‘ eighth season has been unveiled. The clip teases Jon Snow and Daenerys Targaryen’s arrival in Winterfell, and Dany’s first face-to-face encounter with Sansa Stark.

The face-off looks tense, to say the least. “Winterfell is yours, your grace,” Sansa tells Dany, and she doesn’t look too happy about it. Brienne of Tarth, guarding Lady Stark, and Ser Jorah Mormont, accompanying his Khaleesi, also make appearances.

Although clip shows a long-awaited meeting, we’re still waiting for the reunion of the ages between Jon Snow and Arya Stark.

Entertainment Weekly previously reported that this is how Game of Thrones‘ Season 8 kicks off. The outlet published in November:

GoT fans previously got a glimpse of this scene in an earlier HBO promo highlighting the network’s 2019 projects. The seconds-long shot shows Sansa giving Jon a hug begrudgingly.

There’s more waiting for Jon at Winterfell than awkward tension between his half-sister (now cousin) and his lady (now aunt!). Bran Stark, now the all-knowing Three-Eyed Raven, and Sam Tarly were last seen at the Northern stronghold, where they discovered that Jon is the heir to the Iron Throne and the son of Rhaegar Targaryen. Sounds like a fun homecoming.

Game of Thrones returns for its next and final season in April. The exact date of the season premiere has still not been announced.