Nina Dobrev just got v candid about a breakup she went through in the midst of being cast as Elena Gilbert on The Vampire Diaries. Apparently, things got pretty messy after she and her then-BF both auditioned to be on the mega-hit series, and, well…we know how things played out.

“They were gonna choose him [for the role of Damon Salvatore],” the actor dished to Jessica Szohr on a recent episode of the Gossip Girl alum’s XOXO podcast. “They ended up not choosing him, but I got cast. And then it got awkward.” Nina shared that shortly after she landed the part of Elena, the relationship ended. “We broke up,” she said.

Showrunners Kevin Williamson and Julie Plec went through leaps and bounds to find the perfect trio to lead the now-iconic love triangle, which was ultimately rounded out by Ian Somerhalder as Damon Salvatore and Paul Wesley as Stefan Salvatore. Nina confessed to Jessica that she did chemistry reads with over a dozen different actors, and though she definitely had chemistry with Ian and Paul, she also “had chemistry with a lot of people.” “I also felt like a broken record, because at this point I’m there for four hours saying the same words. They all started looking the same and blending into one another.” 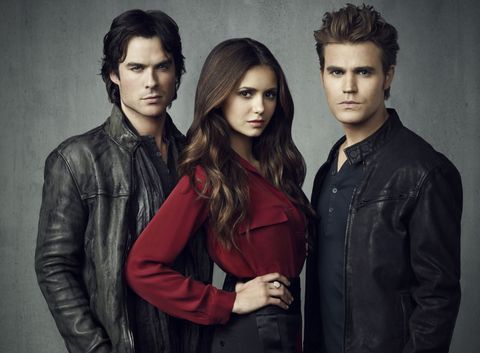 As we now know, there ended up being a lot more drama between the Nina and Ian…who the Degrassi alum just so happened to date from 2010 to 2013. But the two have managed to remain friends and keep things cordial despite continuing playing on-screen love interests while finding new IRL partners of their own. In fact, years later in 2019, Nina discussed their platonic bond during a January 2019 episode of Watch What Happens Live and revealed, “I don’t think [it’s] weird at all…I think that [Ian and Nikki Reed] have a beautiful baby, and they are happy and so am I. What’s bad about that?”

Plus, at the start of 2020, Nina sparked her own romance rumors with Olympian Shaun White, whom she is still dating two years later. More recently, Shaun celebrated Nina’s birthday on Instagram while she told E! News how proud she is of her beau around 2022 Beijing Olympics, gushing, “I am really excited for him. Just to get into the Olympics at all is one of the hugest accomplishments, let alone to get in five times. I’m so excited. I’m so proud of him.”