Diversity, lighthearted silliness and many shots of Queen guitarist Brian May’s luxurious gray mane took centerstage at the 91st Academy Awards on Sunday night during an otherwise unorthodox ceremony without a host. But even without a leader, the show went on, and Green Book, Bohemian Rhapsody, Black Panther and Roma each won multiple awards.

But even though the night got off to a bumpy start — an incredible performance by Queen and Adam Lambert followed by a clunky montage of films — the lack of direction made for an interesting night that emphasized the awards over the usual shtick. Green Book, a film about the unlikely bond between a black pianist and an Italian-American roughneck, won Best Picture. (Here’s what that could mean.) Meanwhile, the Queen biopic Bohemian Rhapsody scored a trophy for Rami Malek’s portrayal of Freddie Mercury and several for technical categories. The comic-book adaptation Black Panther won in three technical categories. And Roma, a film about a family’s struggle in Seventies Mexico City and the projected favorite for the night, scored nods for Best Director (Alfonso Cuarón) and Foreign Language Film.

The general freewheeling nature of the evening also lent itself to unusually fun surprises. Lady Gaga and Bradley Cooper performed a chemistry-filled, intimate rendition of A Star Is Born’s Oscar-winning “Shallow” without an introduction; moreover, the whole thing was shot with the audience as the backdrop. Melissa McCarthy and Brian Tyree Henry dressed to the 99’s to present the costume trophy; McCarthy looked like the queen from The Favourite, except her costume was decorated with all of Oliva Coleman‘s bunnies (and she even had a bunny puppet). And Amy Poehler, Tina Fey and Maya Rudolph had the honor of announcing the first award – a distinction that allowed them to highlight that they were not the evening’s hosts but, as Fey said, “we’re gonna stand here a little too long so that the people who get USA Today tomorrow will think that we’re hosting.”

The lack of a ringleader also allowed for some of the more poignant moments to stand out on their own. With no Jimmy Kimmel serving as court jester this year (or, mercifully, no Kevin Hart who was supposed to host the show but stepped down amid controversy over homophobic tweets in December and was not replaced), most of the commentary about today’s social issues came from the winners and even some of the presenters. Chef José Andrés recognized “the invisible people in our lives” — immigrants and women — when introducing Roma as a Best Picture contender. 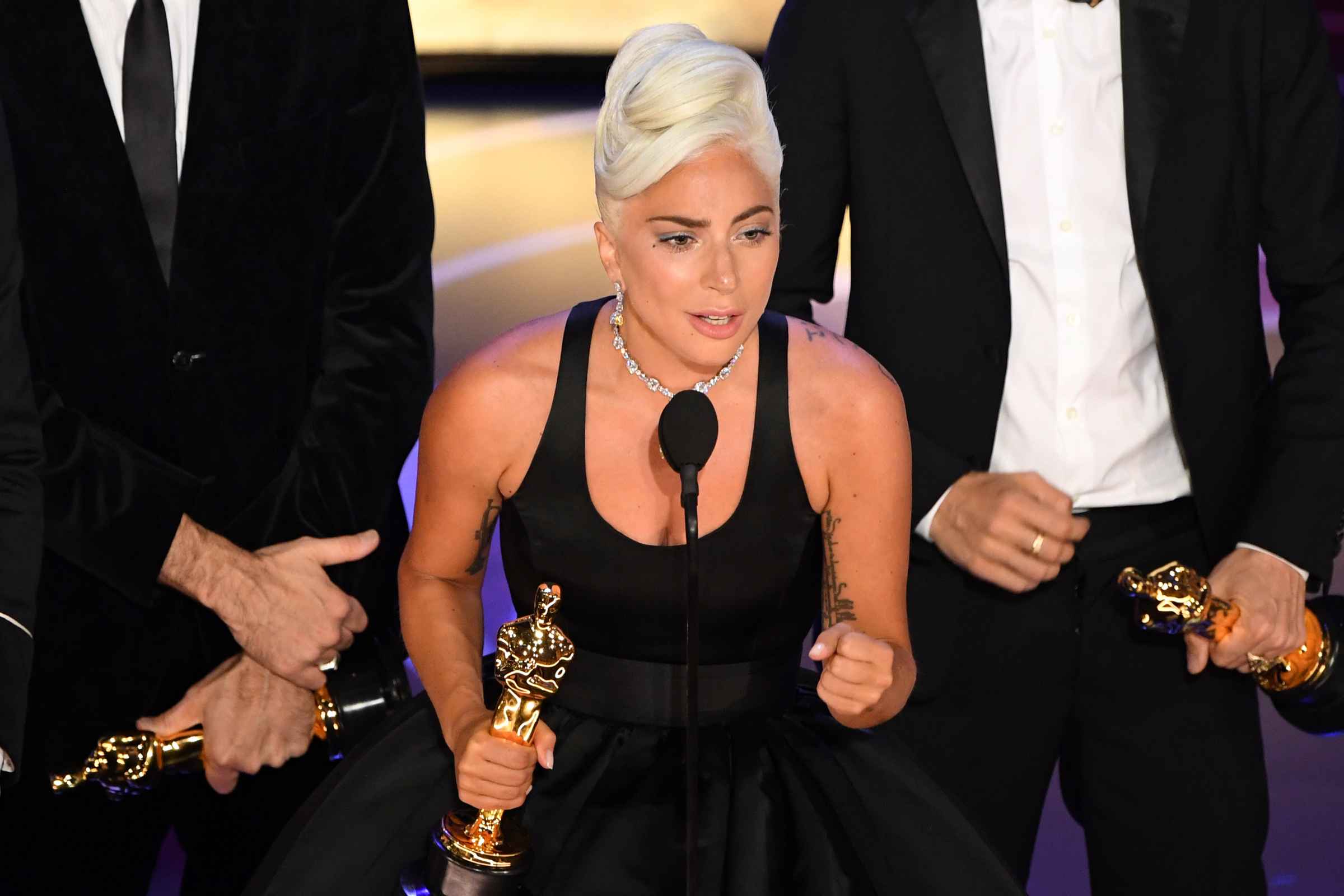 Watch Lady Gaga’s ‘Shallow’ Oscar Speech: ‘If You Have a Dream, Fight for It’

More of the winners this year, too, were people of color. Rami Malek, who won the Best Actor trophy for playing Freddie Mercury in Bohemian Rhapsody, proudly told the audience that he was the son of Egyptian immigrants and said that people should find both his and Mercury’s stories. “I think to anyone struggling with [their identity] and trying to discover their voice, listen, we made a film about a gay man, an immigrant who lived his life just unapologetically himself,” he said. “And the fact that I’m celebrating him and this story with you tonight is proof that we’re longing for stories like this.” (Strangely, the music he was played off to was “America” from West Side Story.)

Elsewhere, the Asian-American filmmakers behind the winning documentary Free Solo, praised the hiring of more women and people of color. Javier Bardem, when introducing the Foreign Film category, said (in subtitled Spanish), “There are no borders or walls that can restrain ingenuity and talent.” That category’s winner, Cuarón, who is Mexican, joked that he grew up on foreign films like Citizen Kane, Jaws and The Godfather. Black Panther costumer Ruth E. Carter, one of the first African-American women to win that award, said she was proud to be “honoring African royalty and the empowered way women can look and lead onscreen.” The team behind Spider-Man: Into the Spider-Verse took pride in making a film where non-white filmgoers could say, “He looks like me” or “They speak Spanish like us.”

Domee Shi, the Chinese-Canadian director of the Oscar-winning short Bao, encouraged young women to follow their muses. “To all of the nerdy girls out there who hide behind their sketchbooks – don’t be afraid to tell your stories to the world.” And Rayka Zehtabchi, one of the filmmakers of Period. End of Sentence, the winning short documentary about the stigmatization of menstruation in rural India, said she wanted to empower women. “I’m not crying because I’m on my period or anything,” she said. “I can’t believe a film about menstruation won an Oscar.”

When Green Book was named the Best Picture, filmmaker Peter Farrelly spoke of the film’s commentary on race relations (even if it was reductive of the larger issue). “The whole story is about love,” he said. “It’s about loving each other despite our differences and finding out the truth about who we are. We’re the same people.” After climbing up Samuel L. Jackson out of sheer glee, Spike Lee used his mic time for his adapted screenplay win to call for people to mobilize and “be on the right side of history” in advance of the 2020 presidential election. “Let’s do the right thing,” he said. And then he laughed, “You know I had to get that in there.”

Although giving voices to the voiceless was a thread throughout the night, it was a different shade than last year, when fallout from the Harvey Weinstein scandal overtook the evening. Notably, ABC’s red-carpet hosts started asking actresses “Who are you wearing?” again (a conversation that was frowned upon last year, thanks to the Time’s Up initiative) and despite Bohemian Rhapsody winning so many awards, nobody so much as mentioned the name of its director, Bryan Singer, who is facing allegations of sexual misconduct.

Another tectonic shift that went uncommented upon was the fact that the streaming service Netflix has started to take more of a hold on Hollywood. Roma‘s success is a testament to the service’s power, as is the documentary Period. End of Sentence, which the platform produced. Studio heads are likely shaking in their boots.

But even if it wasn’t underscored with cringe-worthy gags this year, the Oscars proved that Hollywood is changing. It’s something that Cuarón lightly underscored in his acceptance speech for Best Director. After thanking the Academy for recognizing a film about an indigenous woman, he spoke to the power of cinema. “As artists, our job is to look where others don’t,” he said. “This responsibility becomes much more important in times when we are being encouraged to look away.”