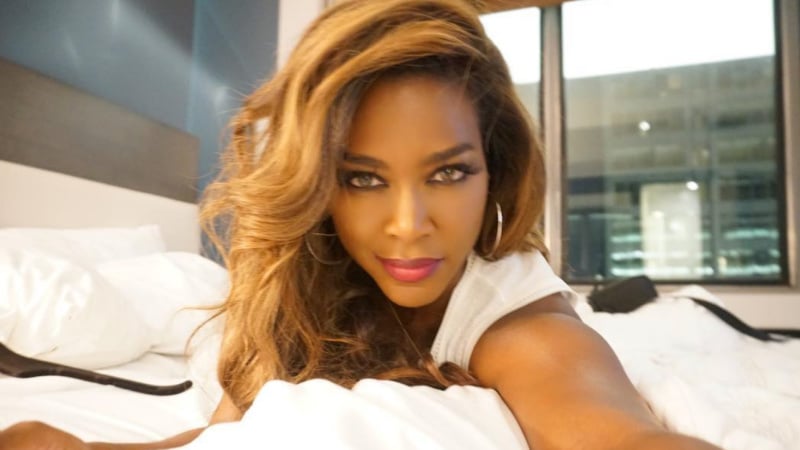 Kenya Moore is ready to introduce her daughter to the world. After several weeks of waiting for an introduction to Kenya’s daughter, the former Real Housewives of Atlanta star has finally shared a picture of her baby girl’s face for her fans to see.

This morning, Kenya shared the first official photo of her daughter, Brooklyn Doris Daly, with the world through People magazine. She welcomed her daughter via c-section on November 4. Moore tells the magazine that she feels so blessed with her daughter, revealing that everything she’s gone through makes it all so worth it.

It’s no secret that Kenya has struggled to get pregnant. In November last year, Moore was spotted leaving a fertility clinic in Barbados. She never opened up about her decision to get fertility treatments there. At the time, she was living in Atlanta, while her husband Marc was living in New York City.

Moore hasn’t really been open about her pregnancy struggles, possibly because she hasn’t been filming The Real Housewives of Atlanta. But Kenya did reveal that the doctors couldn’t see the baby’s skeleton during the first ultrasound.

The doctors then suspected that she was having an ectopic pregnancy, meaning the pregnancy hadn’t implanted in the uterus like it should for a normal pregnancy. Usually, ectopic tube pregnancies are terminated.

A few weeks before the birth, she was diagnosed with preeclampsia, a condition that some women get in late pregnancy. She documented this on Instagram at the time, with fans telling her that she didn’t look normal.

I made fun of my swollen feet at @cynthiabailey10 party. Next day my tests came back for possible preeclampsia… I gained 17 lbs in ONE week due to severe swelling and water retention, high blood pressure, and excess protein in urine. This is NOT normal! I took more tests. Baby is fine but if they come back higher #babydaly will have to come same day. Staying positive. To my pregnant sisters please go to your visits and tell the doctor of any drastic changes. Thank God I have great doctors.?? #babydaly #highrisk #love #family #miraclebaby #kenyamoore #babybump #pregnantover40

Preeclampsia could potentially be dangerous for both the mother and the child. At the time, she recalls gaining 17 pounds in a single week.

Her condition continued to worsen and the doctors told her to pack her bags and get to the hospital as soon as possible.

It all started with you… If I had not met my king I would not have become a mother to the most beautiful baby I have ever seen I am so thankful for you You two are my whole world. I love you Mr. Daly—Mrs. Daly #mrdaly #thatmrsdalytoyou #blessed #thankful #fairytale #family #brooklyndaly

Shockingly, her emergency c-section lasted three hours, which is a lot longer than the standard c-section. The reason behind the lengthy surgery was fibroids, meaning doctors cut her both vertically and horizontally to avoid cutting into a fibroid. If that had happened, Kenya could have bled to death.

“They couldn’t get the baby out,” Moore told the magazine. “There were all these complications and they knew if they cut into a fibroid, I could potentially bleed out and die. So they ended up cutting me vertically too, to just get the baby out and make sure I survived the surgery. They were so scared they were going to lose me.”

The good news is that Kenya is back home with her baby girl and it seems that the recovery is going well. Moore hasn’t revealed whether she’ll be trying for a second baby, but no one can blame her if she decides to stop with one.

“I finally have everything I’ve dreamed of,” Kenya said of her daughter Brooklyn.