“Proven Innocent” wants to help the hopeless but can’t save itself from its ill-equipped noble intentions. Created by David Elliott — known for testosterone-laden fare like “G.I. Joe: The Rise of Cobra” — Fox’s new legal drama plays like a dude-bro who has suddenly found wokeness, now that he’s become a father of daughters.

In the series, Rachelle Lefevre stars as Maddie Scott, an attorney whose clunkily monikered Injustice Defense Group exonerates the wrongly convicted. Maddie has a fire in her after she and her brother Levi (Riley Smith) were sent to prison as teenagers for a murder they didn’t commit. Not only will Maddie help others like herself, but she’s also determined to take down Gore Bellows (Kelsey Grammer), the prosecutor in the fateful trial against her years ago. He’s still at it, and the two butt heads as Maddie turns up evidence to undo many of his convictions and shame him in the process.

She works with a team that includes partner “Easy” Boudreaux (Russell Hornsby), podcaster Violet Bell (Nikki M. James), and investigator Bodie Quick (Vincent Kartheiser). Performances are generally competent but unremarkable, with Kartheiser adding a bit of sensitivity to his character’s manic glee. Grammer does what he does best, even though this bluster is something viewers have seen from him before.

In the wake of true-crime hits like “Serial” and “The Jinx,” “Proven Innocent” delves deep and finds loopholes to right past wrongs, and in the process takes a strong stand on social justice stance by uncovering bigotry and corruption. But even as the show tries to parse legalities and offer differing points of view on topics such as religious tolerance and abortion, the heavy-handed posturing and speechifying make it clear which side the audience is supposed to pick. This is not a show that respects the viewers to come to their own conclusions and is rife with mansplaining that’s barely disguised as exposition, dialogue, or flashbacks. 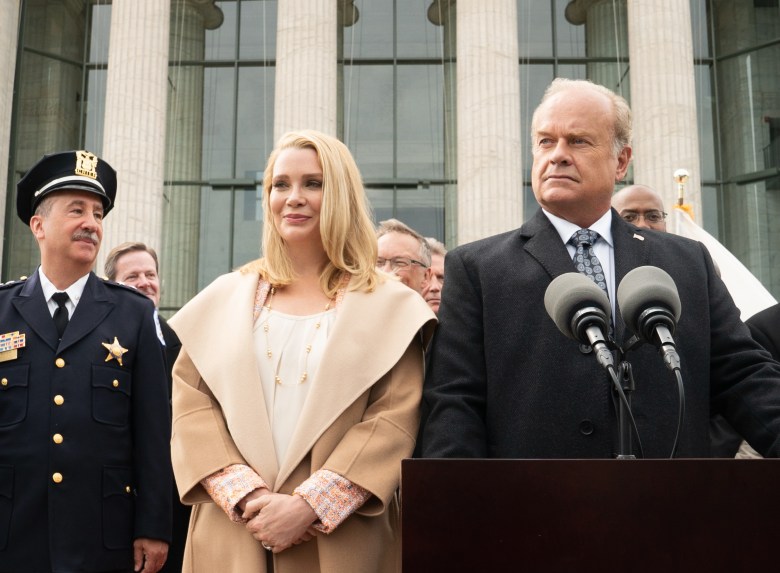 Even worse, the show doesn’t respect its own characters. Rarely is anyone given any interiority; their identity is broadcast in ways that betray a lack of awareness or sensitivity in development. As the righteous protagonist, Maddie is overly glib and snarky, perhaps to counteract the seriousness of the show’s subject matter. But the jokes she makes in court aren’t actually funny or clever, which only serve to make her appear petty and clueless.

Undermining the strength of its characters appears to be a consistent failing on the show’s part. Even how Maddie rescues her newfound pet dog is highly problematic and yet is played off as if it were a joke. Also, a revelation about her past at the end of Episode 4 (one of the two episodes given to critics for review) comes off as an exploitative storytelling device rather than an illuminating character dimension. None of these character choices feel earned, and therefore they tend to make the show feel false, as if it’s merely paying lip service to social issues and diversity because they’re en vogue.

Take the show’s low opinion on journalists. While criticism of the press can be valid and justified, the show takes the lazy route in depicting journalists as uniformly unprincipled and never actually reporting. Dylan (David Alpay) is on the Metro beat covering Maddie’s cases, but as soon as she’s in his orbit, he claims he’d give up a Pulitzer prize just to go on a date with her. Instead of heeding this massive conflict of interest red flag, Maddie finds him hitting on her charming.

The biggest clue to why “Proven Innocent” rings false can be found in Kartheiser’s character Bodie, who embodies everything that’s wrong with the show. Outwardly he channels the geeky beard and soul of Wil Wheaton. He’s affable, cracks jokes, and is a helpful and optimistic guy. But his throwback attitudes and presentation feels straight out of the ’80s nerd films. His favorite pastime in the office is slicing katanas through the air while shrieking out Asian gibberish. He also lands himself a love interest whose job allows her to literally dress up and role play out his objectification fantasies. 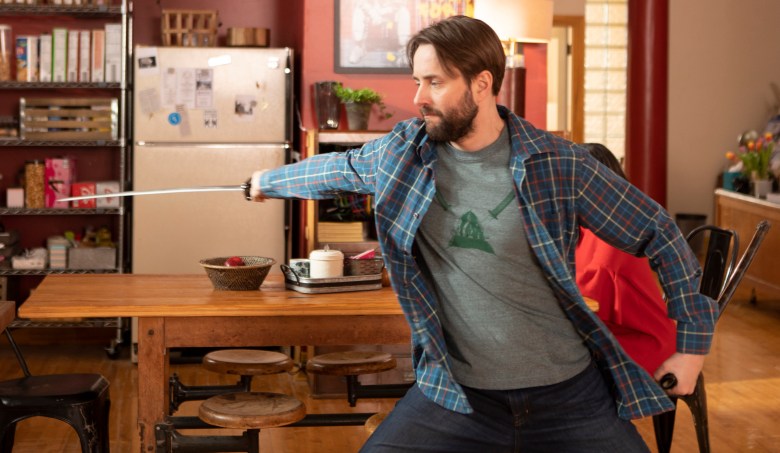 This is just one example of the show’s immature attitude towards sex and sexuality. It’s not that the characters are having it that is offensive, but how it’s utilized for titillation, not story or character development. The night after one woman has sex with her date, Bodie asks her about it and then high-fives her. This is played out as a positive, bonding moment when in fact it’s none of his business and should never have come up at work. Like Bodie, the show only has a rudimentary understanding of what it means to be an ally — the cases that Maddie takes on very much makes a statement about believing women and marginalized groups — but often reverts to its tone-deaf comfort zone for laughs.

Nothing new has really broken through the legal genre on TV lately. “Proven Innocent’s” clumsy earnestness, undercut by a baffling insensitivity, is not the answer to standing out from the “Law & Orders” of TV and could turn off viewers from the very things it’s espousing. Fox should have overruled this mess while it was still in development.