For four seasons now, Rick and Morty fans have watched Rick force Morty into adventure after adventure. Morty has been Rick’s dutiful assistant in countless projects ranging from destructive to world-saving. It begs the question: What is it all for? Do Rick and Morty go on adventures simply because they’re in a TV show about a grandfather and his grandson going on adventures? Or is it all leading to something? In a recent interview with MSNBC, the show’s creator, Dan Harmon, spoke about Rick’s M.O. 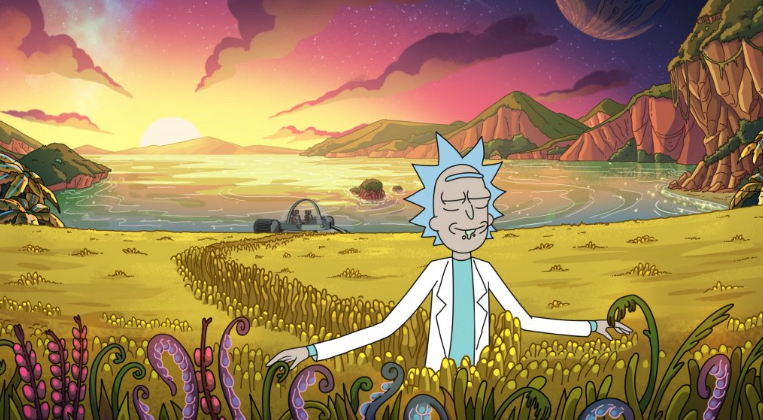 The ‘Rick and Morty’ ‘religion,’ as defined by Dan Harmon

Each show has a general moral philosophy that dictates how characters move within their world.

“Rick and Morty’s religion is: Nobody exists on purpose,” Harmon told Ari Melber. “If you are terrified by that, the best we can say is you’re not alone.”

“The truth is, in any objectively measurable sense, we have become creatures that believe in humanity and systems,” he continued. “And we struggle between those things. We can’t blame our problems on boogiemen that live in the clouds. We have to either blame ourselves or we have to stare into a void.”

What is Rick Sanchez up to?

Melber offered a third option: Escape. Self-medication, for instance. The interviewer asked Harmon if Rick avoids the void by diving into adventures and projects, like turning himself into a pickle or creating the ultimate poop haven.

Harmon agreed that Rick is “certainly keeping himself occupied.” But hinted that the reason may not be that he’s simply distracting himself from the pointlessness of it all.

“I think one of the big, giant shark-jumpers on Rick and Morty is: Does he have a larger goal that he hasn’t shared yet or is what you see what you get? Rick is obviously in a state where there is something left to be done or he’d just be sitting on a couch with a needle in his arm,” said Harmon.

But the creator went on to say that speaking about, or even knowing about, Rick’s true motivations “would ruin the show.”

Can Rick and Morty change?

In an interview Harmon did with Decider on June 15, he spoke about the tricky question of if animated characters should develop and grow as time goes on despite not physically aging. If Rick is working toward a big, secret plan, can he change along the way? Can Morty in unknowingly helping him? Even in the first episode of Season 5, we’ve already seen Morty exhibit a bit more bravado than we’ve seen previously.

“It’s a weird balance,” said Harmon. “Even in regular live action TV it’s weird because… you don’t want your characters to grow and change to the point where they stop being the characters that they were, especially in animation where literally characters are, for instance, 14 years old forever. You also don’t want to create the feeling that they are beyond change. It’s kind of a weird, fun philosophical thing where Morty is not changing because he’s aging. But Morty is changing because he’s been in the show for so long. We do talk about it when we pitch story ideas that have to do with Morty being a little more jaded or his relationship with Rick changing. Only time will tell if that’s just an awful idea, if Morty should just simply be frozen in amber.”