Season three is set to be coming to a close next week with episode 22.

There have been many predictions about the Riverdale season three finale after it seemed Jughead Jones could be the Gargoyle King.

The CW show’s boss confirmed the character of Fred Andrews would be making an exit following Lule Perry’s death.

The Fred Andrews and 90210 actor died aged 52 on March 4 after suffering a stroke.

Showrunner Roberto Aguirre Sacasa posted on Twitter a cast photo featuring the late star, along with the caption: “Going through pictures on my way to set. From the early days. With Luke in the middle.

“Our heart, always. Tonight’s episode of #Riverdale finds Fred doing what he does best–helping Archie. It is dedicated to Luke, as all episodes will be for the rest of our run.”

Aguirre Sacasa previously posted after news of Perry’s death: “So heartbroken about Luke. He was a father, brother, friend, and mentor.

“Each night before he had to shoot a scene, he’d call me and we’d talk about…everything. I will miss those calls. And my heart goes out to all his family and friends.” 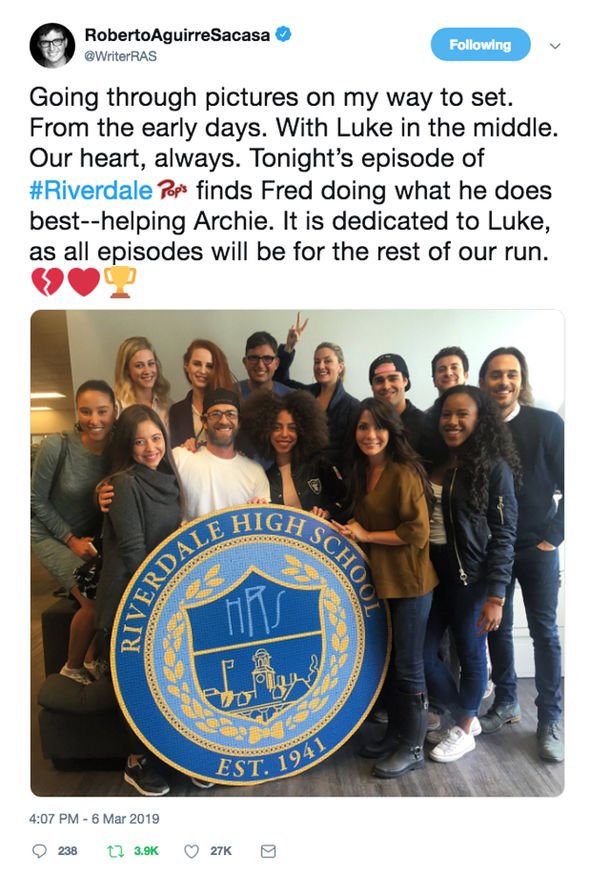 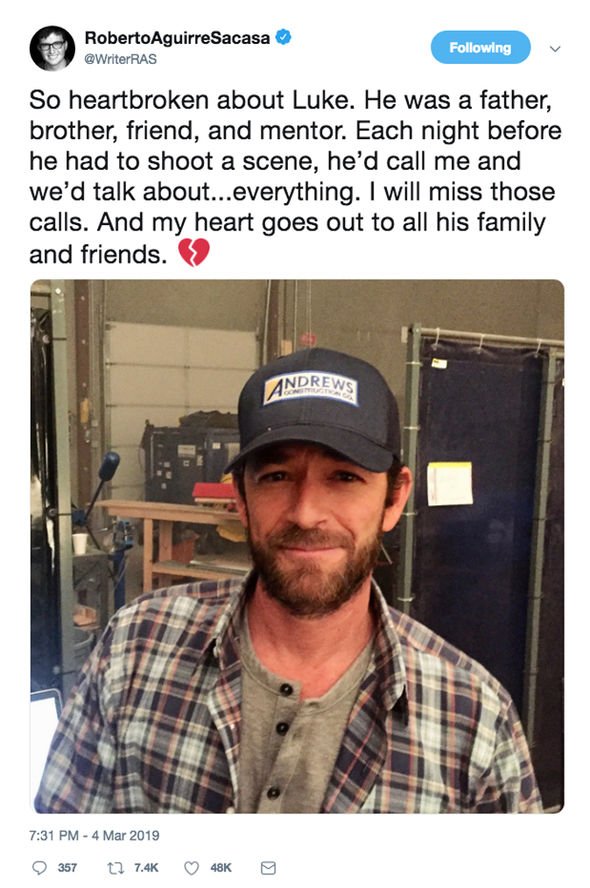 The Riverdale season three midseason premiere was on January 17 in the US on The CW.

Netflix dropped the opening episode on January 18 for those in the UK.

The midseason premiere proved to be a shocking one after fans were left asking if Archie Andrews was dead but he later turned out to be fine after his bear attack.

Riverdale season three is now halfway through as the mystery involving Gryphons and Gargoyles deepens.

The central characters have now been plunged into real danger with a quarantine around the town.

A promo was previously released by The CW and hinted that Jughead could have another brush with death if he’s not careful.

A season three trailer was released at San Diego Comic-Con and teased some dark times ahead, including Chic Cooper becoming the Black Hood’s apprentice.

Riverdale season two concluded on May, 16 in America on The CW before hitting Netflix the following day.

Season two ended on a cliffhanger that saw fan-favourite Archie Andrews (played by KJ Apa) arrested for murder and hauled away by the police.

The episode also revealed the fate of Jughead Jones (Cole Sprouse), who it turns out didn’t die.

IS ARCHIE ANDREWS DEAD IN RIVERDALE? 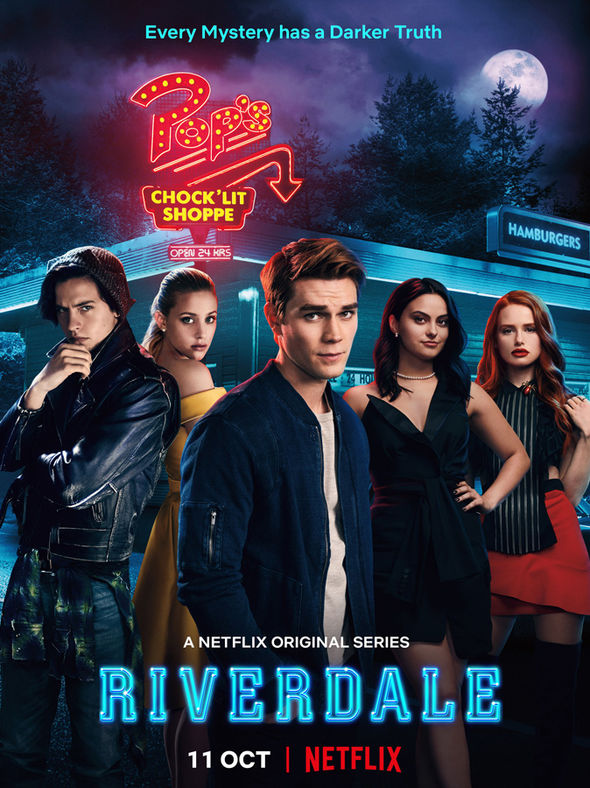 Will there be another season of Riverdale?

Season four of Riverdale is now going ahead after The CW renewed the show.

Previously, Netflix and The CW confirmed that Riverdale season three got the green light last year along with lots of other shows.

At the time, Riverdale wasn’t the only show given a renewal, The CW announced Arrow, Black Lightning, Crazy Ex-Girlfriend, Legends of Tomorrow, Dynasty, The Flash, Jane the Virgin, Supergirl and Supernatural would all be back.

Riverdale season three is thought to have gone into production earlier this year after FP Jones actor Skeet Ulrich suggesting that filming would be starting in the summer.

The good news about the recommission came as fans were left fuming after finding out that Riverdale season two had gone on a third hiatus.

Even before the official renewal, it was looking good for Riverdale which has a huge following and is bringing in the ratings. 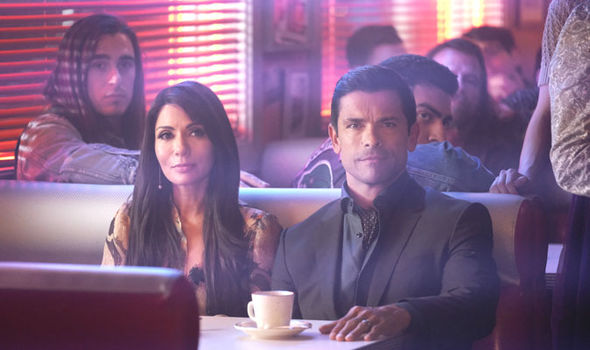 Riverdale season two premiered in October 2017 and brought in a record audience of 2.3 million.

Season two of Riverdale went on a short break before making a comeback.

As well as ratings and a loyal fanbase, CW announced that it would be rebooting Sabrina the Teenage Witch for a new generation.

The show has been adapted from the Archie Comics series The Chilling Adventures of Sabrina and exists in the same world as Riverdale.

It seems likely that there could also be a crossover between the two series at some point in the future. 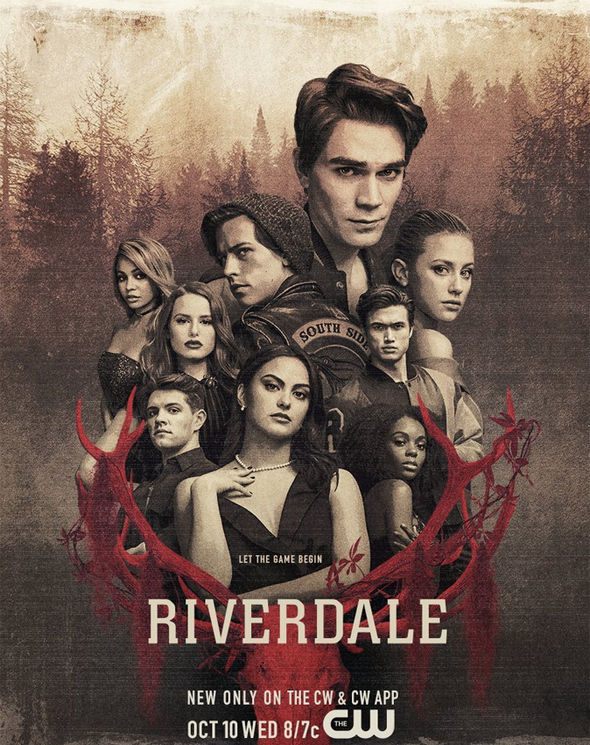 When will Riverdale season 3 be released on Netflix?

The third season will hit screens on October 10, 2018 Stateside before dropping on Netflix.

The CW recently unveiled all the premiere dates for its autumn schedule.

Season two premiered in October 11, 2017 and dropped on Netflix the following day at 8am for UK viewers to watch, so it seems likely that the new run will have a similar release date on the streaming platform.

The second run featured a total of 22 episodes and it seems likely that season three would have a similar number of episodes.

However, the episode count hasn’t been revealed as yet and season three could actually be shorter.

CW aired the first nine episodes from the season before taking a midseason break following the finale on December 13, 2017. 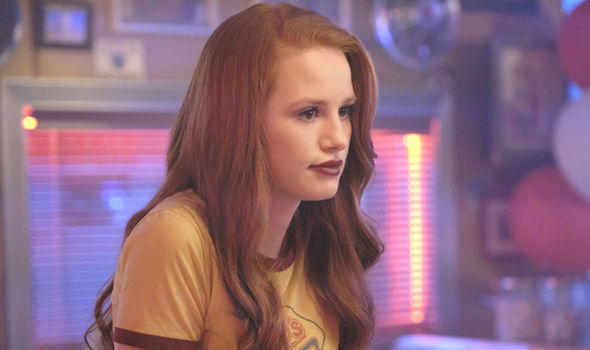 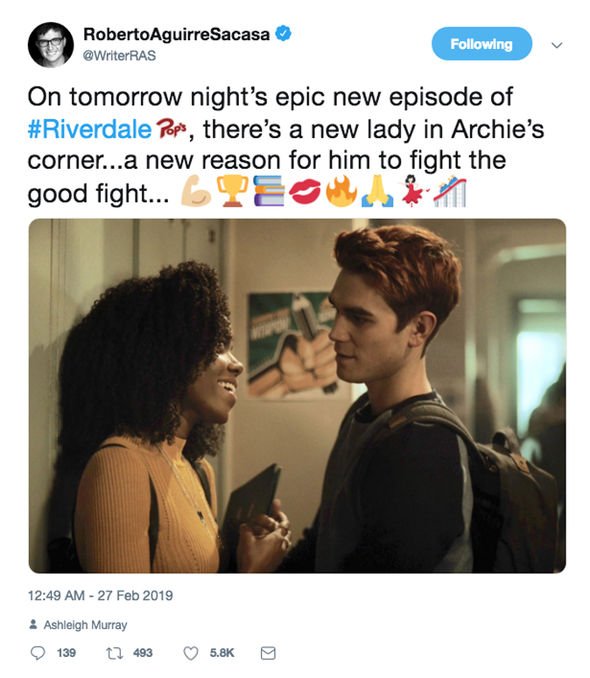 What will happen in Riverdale season 3?

Season three of Riverdale has also seen a major shakeup in relationships with Archie and Veronica breaking up and the redhead getting together with singer Josie McCoy.

Showrunner Roberto Sacasa Aguirre posted on Twitter about the new series: “On tomorrow night’s epic new episode of #Riverdale, there’s a new lady in Archie’s corner…a new reason for him to fight the good fight…”

There have been lots of theories that Betty Cooper’s mum could be killed in a strange cult twist.

A new theory has emerged suggesting that Betty Cooper could exit from Riverdale.

Following the release of the key art, there have been suggestions that Betty and Jughead will take down Hiram Lodge together.

More theories have emerged suggesting that Jughead and Betty could go head-to-head in a new twist.

Season three is confirmed to have a flashback episode which will see more secrets spilling out.

There have been theories that Betty’s brother Chic could still be alive.

Also, there have been theories that Betty and Jughead could split thanks to a dark, new trailer.

Archie is set to be facing off with the Gargoyle King in season three, who will be taunting him.

Even star Camila Mendes posted about the Gargoyle King after the Riverdale season three poster was released, hinting at the character’s importance.

A teaser for the show recently dropped, hinting at what was to come.

Riverdale creator Roberto Aguirre-Sacasa has recently revealed that Alice Cooper and FP Jones have a “really dark” secret that is set to come out in season three.

There are set to be big changes for Ethel Muggs in the new run, according to star Shannon Purser.

Meanwhile, KJ Apa dropped a bombshell about Veronica that could rock the show.

There has also been plenty of speculation about the true identity of Penny Peabody, who could be Betty’s mother, according to some fan theories. 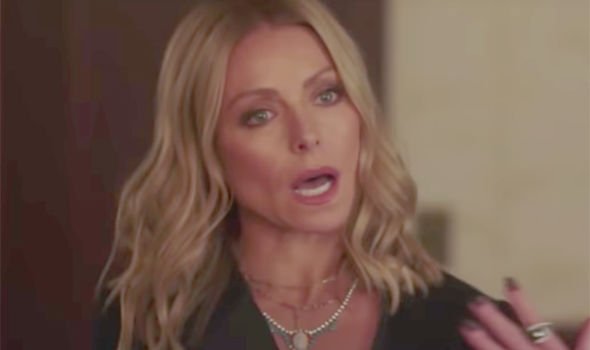 According to Ashleigh Murray, who portrays Josie McCoy, there won’t be a crossover between Riverdale and fellow Archie Comics show The Chilling Adventures on Sabrina.

There was speculation that there could be some sort of crossover between the two shows.

Showrunner Roberto Aguirre-Sacasa has teased fans on Twitter about what to expect from the third season.

He posted on the micro-blogging site: “Can’t wait to show you what we’ve been working on!!”

The plot of Riverdale season three will depend on the direction of the second half of season two, which has already had a number of twists and turns.

However, it’s likely to be more of the same: a gritty thriller in a high school background.

Riverdale is full of mysteries and murder, season two, in particular, followed the students of Riverdale High trying to solve the Black Hood killings and expose the perpetrator.

As the season went on, the world of Riverdale expanded and more characters were introduced into the story.

The merger of Riverdale High and Southside High will also see a new dynamic coming to the show with more characters brought into the mix.

WHEN IS THE NEXT EPISODE OF RIVERDALE SEASON 3 RELEASED?

Riverdale’s most shocking moments so far

Riverdale 2: The shows most shocking moments so far.

Riverdale’s most shocking moments so far

Who will be in Riverdale season 3?

Most recently Gina Gershon was cast as Jughead’s mother and Trinity Linkins named as the star playing his younger sister Jellybean.

There have been suggestions that the pair will be going up against Jughead in season three.

Is there a trailer for Riverdale season 3?

Yes, the trailer for season three dropped and sees Veronica going up against her dad Hiram.

The trailer also showed that Archie wouldn’t be in prison for long.

There were also hints that things were going to go badly for the students of Riverdale High as they were faced with a brand new threat.

Riverdale season 3 airs on Netflix on Thursdays from 8am