You can take the filmmaker out of indie film, but you can’t take indie filmmaking out of Mark Duplass. The co-creator of “Room 104” has a niche at HBO: He makes the genre-shifting, episodic anthology series cheap and fast. So fast, in fact, the next season is already done.

“Here’s the scoop on Season 3 — we already shot it,” Duplass said in an interview, weeks before the Season 2 finale aired. “We have shot it, we have edited it, and we have delivered it. We did two seasons back-to-back because it was going to be so much cheaper.”

Duplass said that’s why the crew shot 24 episodes in a row; now the first 12 have aired, it’s up to HBO as to when the next set drops. Duplass is already hard at work writing Season 4.

It may not replace outgoing HBO juggernaut “Game of Thrones,” but Duplass is filling the premium network’s programming quota with the experimental, inexpensive, and innovative “Room 104.” The anthology series has a simple premise: Each week brings a new story with new characters inside the same cheap motel room. Directors like Anna Boden, Ryan Fleck, Gaby Hoffman, Megan Griffiths, Natalie Morales, Liza Johnson, and Josephine Decker have all checked in for a half-hour (or more), establishing the series as a hub for indie filmmakers with short-form stories to tell.

Duplass said he makes episodes for “a quarter” of the cost typically expected for HBO series, and he’s able to deliver high-quality at a lower cost because “Room 104” isn’t conceived, written, produced, or released like your typical television show. 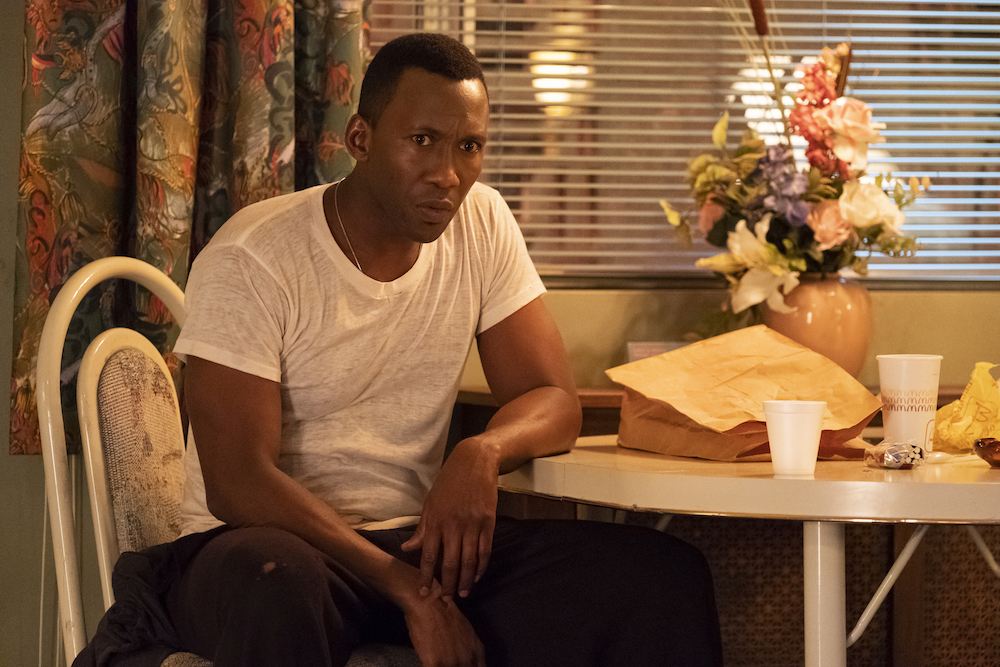 For one, Duplass doesn’t take a lot of pitches. Fellow producers Jay Duplass, Mel Eslyn, Tyler Romary, and showrunner/E.P. Sydney Fleischmann create a “think tank” to kick around dozens of ideas so they can start reaching out to filmmakers who fit each episode’s vision. Duplass writes or co-writes many of the episodes himself — he’s credited on eight of the 12 entries in Season 2 — but those drafts are usually just a starting point.

“We say, ‘Hey, we think you could be really interesting for this,’” Duplass said. “‘Who can really make this great and take it to the next level? I need these kinds of episodes in this tone,’ or ‘Here’s an episode idea I think would be cool, but I’m not the right person to write it, so maybe you could write it.’”

Citing his roots as a musician, Duplass said he often liked the “shaggy” quality of his demo recordings more than the final cut. That inspired his fast-and-loose approach to “Room 104” — a pre-production process they often describe as a “reverse writers’ room.”

“I think a lot of more traditional television development people will look at some of the scripts that we have going into production, and they’ll be like, ‘What the fuck are you doing? This isn’t ready yet.’ [But] we put it up, and we shoot it fast and furious and with that demo-like energy, and then we do a lot of our cleaning and curating and streamlining in post.”

“[The search process] usually looks like me texting them and saying, ‘Are you available/interested to direct ‘Room 104’ with me? Can you text me back yay or nay?’” Duplass said. “It all happens very quickly, and it’s a lot more instinctual and less ‘professional’ than I think most shows are. I kind of just go directly to people, and then we end up looping in agents much later.”

With only a rough sketch of an idea in mind — or even just a tone — Duplass & Co. pitch directors a short set of rules to help guide their imagination: You can’t leave the room, don’t use too many actors, and “then, of course, feel free to break these rules if you have a great idea,” Duplass said.

The ideal example of breaking those rules comes from Liza Johnson. The director of “Hateship Loveship,” “Elvis & Nixon,” and a slew of television projects came up with an idea for a short film on her own, and — without knowing Mark or Jay Duplass — sold her pitch to the “Room 104” team. “Swipe Right,” starring Michael Shannon and Judy Greer, was the third entry in Season 2.

“It was kind of surprising to me that it was possible, you know?” Johnson said, remembering how she came up with the idea in her living room, trying to imagine Shannon playing “kind of a Russian Steve Bannon figure.” “I was like, ‘Oh my God, am I going to make a short film at this station in my life? How will I pay for it? Where will I show it? You know, all the questions that come with a short film.”

Instead of dealing with those questions, Johnson moved from having the idea in July to writing in August to shooting in November. “Because they have this existing infrastructure, it was much, much faster and easier than the process for getting a film together,” she said. 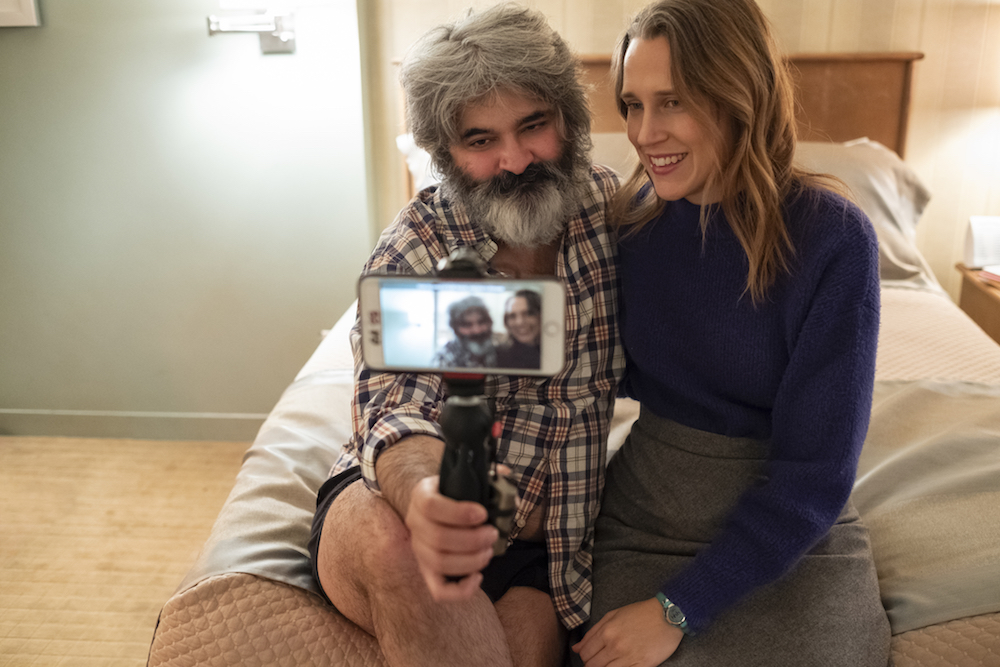 Mark Duplass pitched Josephine Decker after he got a glimpse of her 2017 Tribeca Film Festival documentary, “Flames.” Made with her ex-boyfriend Zefrey Throwell, the film tracks their romance as it slowly falls apart over the course of five years, and Duplass wanted Decker to revisit the concept as a written narrative for “Room 104.”

“I think, to some degree, it reminded him of the work that he’d gotten started making — kind of like improvisatory, pulling from your own life [stories] — and so he brought me in and he’s like, ‘We’d really love for you to write, direct, and act in an episode that’s […] akin to ‘Flames.’”

So Decker, along with writing and acting partner Onur Tukel, wrote “The Man and the Baby and the Man,” which would eventually become the seventh episode of Season 2. The two developed an outline, wrote the script, and sent it to Duplass and Fleischmann.

“I think we only got maybe one or two rounds of notes,” Decker said. “And most of the notes were really thoughtful. At one point, I think I had Erol’s character [Tukel] lock himself in the bathroom, and he was Skyping his friends for spiritual guidance. And Mark was just like, ‘Keep it simple. I found the things that work the best in such a short amount of time are really sticking with the people in the room, you know?’”

Duplass’ notes also proved helpful to Johnson’s episode — she appreciated his understanding of the 30-minute structure and how to fit her bigger ideas into it — as did the show’s other production limitations. Because of the show’s budget, audiences got to see Michael Shannon rap for real, instead of faking it.

“Originally, I just thought that he should kind of lip-sync, which is something the world has actually seen Michael Shannon do before, you know?” Johnson said. “And [because] it’s an awesome low-budget show, that’s not something you can afford to do. So that process made it so much better because then we could write that [rap] for him.”

Decker also credited Duplass with the idea to shoot her episode entirely with an iPhone. She said that ultimately made the shoot “more intimate,” and easier for the actors “to go to the dark, weird, kind of sensual but also very personal places” they had to reach.

But it also helped speed up production.

“We had two days to shoot,” Decker said. “At first, I was like, ‘Oh my God — that’s insane. That’s not enough time.’” But when it came time to shoot, she wanted to run through the whole script in sequence, instead of breaking it up scene-by-scene. Not having to reset for lighting or anything made that much simpler.

“Basically, we ran the whole show maybe three or four times before lunch on the first day, and I was like, ‘Wow, OK, well that’s cool — we definitely have it already,’” Decker said.

She said the speed reminded her of shooting indie films, but the support from HBO meant “there were 20 nice people standing outside set to help you with any tiny thing.”

“I have to say that they have really figured something out,” Decker said. “It was all of the best parts of making an indie film, and none of the worst parts. That is a fucking dream.” 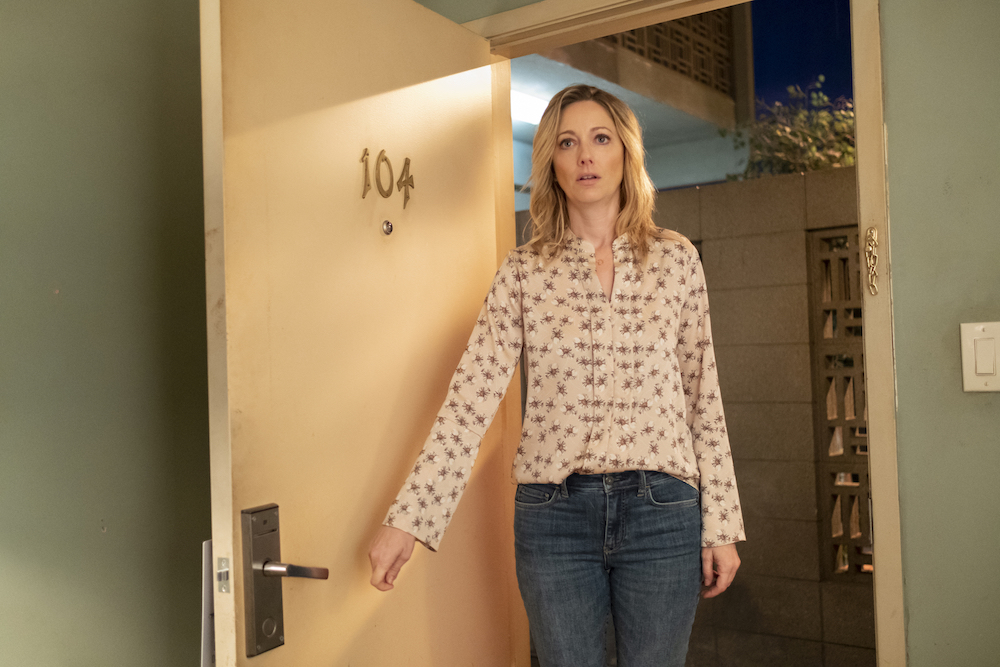 One last wrinkle comes in post. Though Duplass said how much time a director spends in the editing room is up to them — anything from delivering a rough first cut to staying to the end of the editing process is common — directors don’t have final cut.

“It’s definitely the first time I’ve not had final cut, [but] I just had to let [that] go,” Decker said. “They were very respectful of me. There were certain things that I was in love with that we got rid of, but I think ultimately they’re looking at some bigger thing about the viewership — catering to an audience, [and] I may not necessarily know what they are looking for.”

Here’s where the concept of a reverse writers’ room comes back into play: Duplass screens every episode for about 20 people who work at their company, looking to see the episode through fresh sets of eyes.

“We had ‘Wild Wild Country’ here for like a year-and-a-half, so they were a part of our testing team, [too],” Duplass said. “We invite smart friends and filmmakers over and supply them with pizza and ask them to watch it and and give us feedback about what we’re missing. There are a lot of episodes that are relying on some surprises, and we want to make sure we aren’t too far behind or too far ahead of the audiences.”

Even if the episode director and “Room 104” producers thought they “nailed it,” Duplass said that feedback can alter the final cut.

“I was really proud of what we made together,” she said. “I had so much fun working on it.”

“Growing up, I would never have thought I could have an idea that’s so specialized and then have it be television, you know?” Johnson said. “I feel like it’s a pretty experimental space, and the whole time I was really surprised. I’m like, ‘Oh my God — this can be TV, you know?”

And it’s only going to get weirder. Of the new episodes already shot, Duplass would only say they’re “taking some much wilder swings,” and Season 3 is “more experimental.” He also said Duplass Brothers Productions is “developing many more shows” this way — fast and cheap — trying to fill HBO’s growing demand for noteworthy TV. What those projects will look like remains a mystery, but the indie spirit is alive and well at Duplass HQ.

“Room 104” Season 2 is available to stream on HBO. Season 3’s release date has yet to be announced.