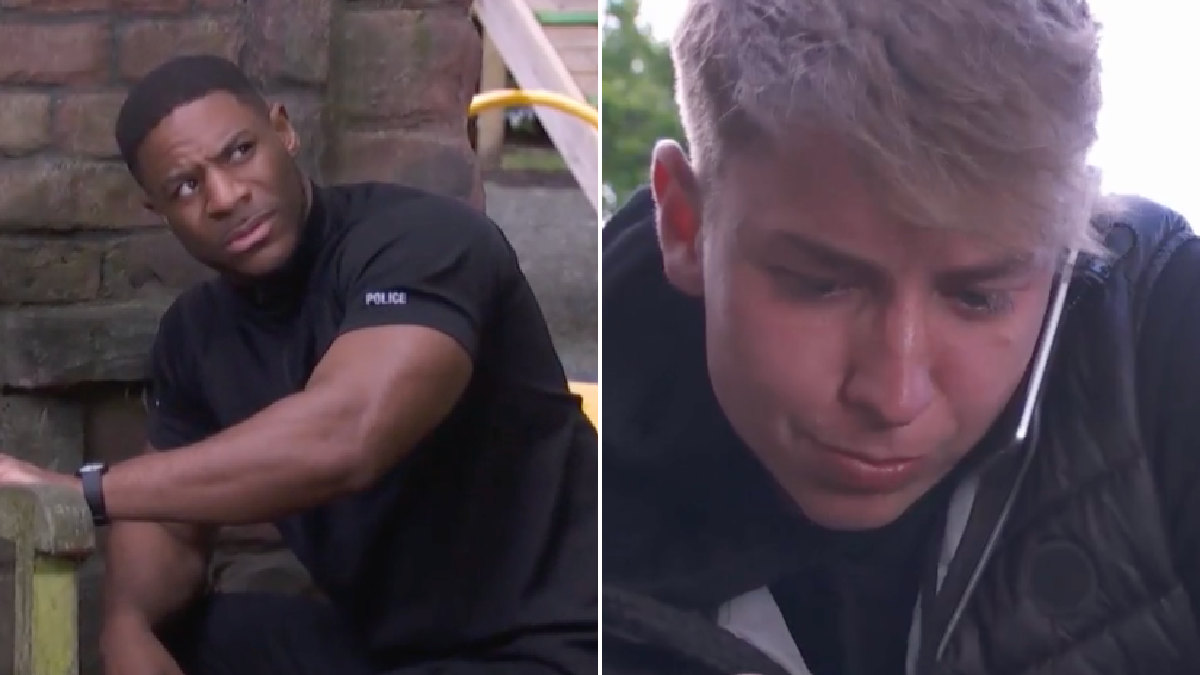 Saul Reeves (Chris Charles) was left fighting for his life in Hollyoaks, after a mystery villager stabbed him in the park, leaving him for dead.

The policeman, as viewers know, was left reeling last week when Charlie Dean (Charlie Behan) informed him that DeMarcus Westwood (Tomi Ade) was carrying a knife.

Monday’s (July 18) edition of the Channel 4 soap saw him make it his mission to confront DeMarcus, hoping to talk him into giving up the weapon before it’s too late.

DeMarcus, however, hid the knife before Saul approached him, and thus when the police officer carried out a search, he was unable to locate it.

Charlie, meanwhile, was less than pleased to find out that DeMarcus hadn’t listened to Saul’s advice in disposing of the knife, and he pleaded with him once more to do so.

But DeMarcus refused, believing that he needs the weapon to protect himself against bully Joseph (Olly Rhodes).

Soon enough, Joseph arrived at the end of term party in the park, and he wasted little time in causing trouble, demanding that DeMarcus stay away from Vicky (Anya Lawrence).

Saul intercepted the showdown, doing everything he could to keep enraged Joseph away from DeMarcus. DeMarcus, however, retaliated with a punch, and accidentally hit Saul!

Saul publicly instructed DeMarcus to do the right thing, but DeMarcus stormed off, and thus Saul branded him a ‘coward’.

Afterwards, the policeman told Grace Black (Tamara Wall) that he was too harsh with DeMarcus, and as the two discussed their future together, Saul decided that it was the perfect moment to propose.

Matters were complicated, however, as he realised he’d lost his engagement ring amid the struggle in the park, and therefore he returned to the scene of the crime to retrace his steps.

When doing so, he was confronted by someone who he evidently knew, and subsequent scenes confirmed that this mystery resident had stabbed him.

Sid Sumner (Billy Price) found Saul bleeding out on the floor, and wasted little time in calling both the police and the ambulance.

Will Saul be okay?

Hollyoaks continues Tuesday July 19 at 7pm on E4, or stream the next episode from midnight on All4.