You don't have to have been raised Catholic to enjoy Lambs of God (Foxtel, Sundays at 8.30pm), but it's a blessing if you were: finally there's pay-off for all those years of sexual repression, guilt, superstition and ritual that were foisted upon those of us who were schooled and ruled by the clergy.

I'm exaggerating (a little) of course; I'm sure there are plenty who came through a Catholic education with only positive experiences. But as a product of the Sisters of (show no) Mercy I still flinch in anticipation of a ruler across the knuckles or a fist to the back of the head whenever I see a nun. Old habits die hard.

Though she belongs to a different order, Sister Margarita (Ann Dowd, known and feared as Aunt Lydia in The Handmaid's Tale) seems cut from the same cloth as my childhood tormenters. The eldest of the three remaining Sisters of St Agnes, she is a disciplinarian given to strange outbursts of violence that seem deeply entwined with the repressed memory of some ancient sexual trauma.

Middle nun Sister Iphigenia (Essie Davis) is a seer, given to mystic visions, and the clear leader of this order. Her posh spoken tones hint at a previous life of privilege, abandoned for who knows what reasons.

The youngest, Sister Carla (Jessica Barden), is a true nature's child, born to be wild. Unlike the other two, she has never known a home or life other than this off-grid clifftop convent on an island in the Irish Sea, connected to the mainland by a rocky causeway crossable only at low tide.

And she has never seen a man, either, until Father Ignatius Jones (Sam Reid) arrives with news that the church wishes to evict them, in order to redevelop the property as a luxury hotel.

Naturally, merry hell breaks loose. And while it is indeed hellish for poor old Father Ignatius – who is tempted, tortured and tonsured by these three strange witches – it makes for very merry viewing. Even if you wouldn't know a stigmata if it poked you in the eye, it's a hoot. 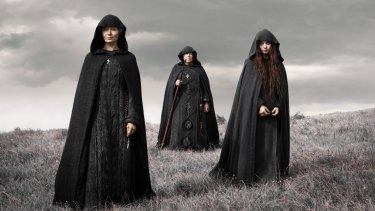 The four episodes of this comedic thriller walk a tightrope between farce and feminist critique of a patriarchal church that either excludes or demonises the feminine, while covering up its own ambitions and transgressions. There are hints of abuse, of misappropriation, of murder, all carried out in the name of the father. The Sisters, meanwhile, are haunted by unholy ghosts – and so, it transpires, is Ignatius.

There's a wonderful element of established narratives being refashioned: the nuns rework Christian rituals and fairytales to reflect both the specifics of their environment and the particulars of their personal histories. A Christian traditionalist might see this as a "corruption" of ritual and liturgy, but you could equally see it as a reassertion of the pagan, pre-Christian traditions that were co-opted by the Church as it spread. The return of the repressed.

Every aspect of the production matches the deft richness of this storytelling, crafted by Sarah Lambert based on Marele Day's 1999 novel. Jeffrey Walker's direction is assured, the performances are consistently good (only occasionally do the accents strain geographical credibility), and the cinematography by Don McAlpine (whose eye has graced everything from Breaker Morant to Moulin Rouge) is luminescent. 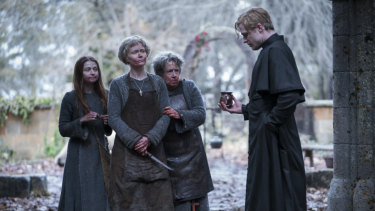 Arguably, though, the real star of the show is the location – and it doesn't even exist!

The rocky mound atop which the convent sits is Tasman Island, off the south-eastern coast of Tasmania; the dilapidated ruins are computer generated; the walled garden that sustains the sisters is in the Blue Mountains; and the interiors of the convent were filmed at Fox studios in Sydney. Turning those elements into that setting was a small miracle. An act of transubstantiation, if you will.

By turns sexy, perverse, silly and smart, Lambs of God is one strange beast. But it's a sheer delight too. Flock to it.