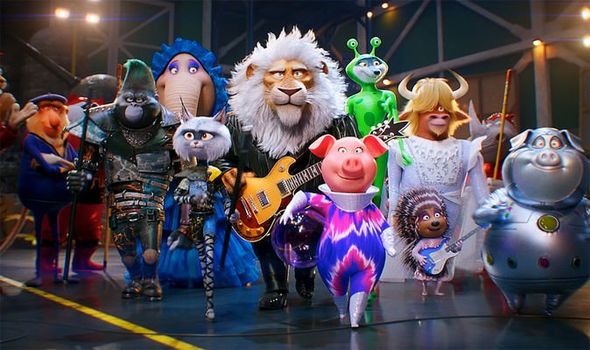 Five years ago, Sing topped the charts by lashing Disney’s Zootropolis together with Cowell’s The X Factor. The unambitious follow-up offers more of the same, with slightly diminishing returns.

Instead of racing to save a local theatre, this time he’s seeking fame and fortune with a “sci-fi musical” staged in a Vegas-like resort.

“Do not do anything to make me look bad or I’ll throw you off the roof,” snarls his mobster wolf backer (Bobby Cannavale), who’s pushing hard against that U certificate.

In a moment of madness, Buster rashly promises he can land reclusive lion rock idol Clay Calloway (Bono, of all people) as his headline act.

While his one-eyed iguana assistant (director Garth Jennings) tries to woo Clay out of retirement, the koala has to steer his returning troupe through rehearsals.

The plot is forgettable and the jokes don’t quite hit their mark. But the animation is sharper and newcomers Halsey and Letitia Wright liven things up with energetic turns as a diva wolf and a street dancing cat.

As in the original, the most memorable sequence is an X-Factor-style audition montage. Turns out Eminem works well when sung by a trio of chimney sweep chicks.”