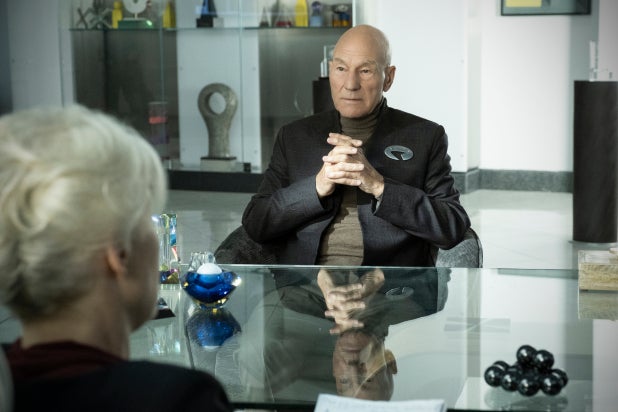 Patrick Stewart is boldly going back to where he’s gone before —  just not in a very long time — when he reprises his role as “Star Trek: Next Generation” captain, Jean-Luc Picard in his upcoming CBS All Access series.

The series has now released a trailer and revealed which former “Star Trek” cast members are joining Stewart — who was last seen as Picard in the 2002 film “Star Trek: Nemesis” — when it presented at Comic-Con earlier this month.

With that in mind, TheWrap has rounded up everything that we know about CBS All Access’ second “Star Trek” series.

1. It will premiere later than expected.
We still don’t have a firm premiere date, but CBS All Access is now saying that “Star Trek: Picard” won’t debut until early next year. It was initially believed that the series would debut at the end of 2019, but that plan has apparently changed.

3. He won’t be your father’s Jean-Luc Picard.
Viewers may have a hard time recognizing Patrick Stewart’s former U.S.S. Enterprise captain.

“It’s been 20-plus years, so he couldn’t possibly be that same person anymore,” said Alex Kurtzman, who is shepherding CBS All Access’s burgeoning “Star Trek” universe, during the Television Critics Association Press Tour in February.

“The question becomes: What has happened to him in that period of time? Have there been occurrences that force him to reckon with choices that he’s made in his life?” he continued. “How do you hold on to to being the person that everybody loved, when the circumstances around you may have changed so radically? Those are the big questions that we’re asking.”

Stewart had been reluctant to revisit the role of Picard over the years, but Kurtzman said he agreed to get on board only if he could do something radically different with the character. “Patrick was really clear with us from the beginning he did not want to repeat what had already been done.”

4. Picard, now an Admiral, left Starfleet behind.
Kurtzman wasn’t kidding when he said this version of Picard would be markedly different.

In a brief teaser, we learned that Picard is now Admiral Jean-Luc Picard… or at least he was. That’s because Picard has apparently hung up his Starfleet badge and retreated to his family’s vineyard. All we know from the teaser is that around 15 years prior to the start of the series, Picard, after leading the “greatest rescue armada in history” had something “unimaginable” happen.

We figure the series is going to delve into just what that was, and why it was bad enough that would make Picard leave Starfleet.

5. He won’t be away from Starfleet for much longer.

In the full-length trailer showed at Comic-Con, Stewart is living out his days on the Picard family vineyard, but his retirement is disrupted after he crosses paths with a young women (Isa Briones) who he thinks is in danger. This appears to be the jumping off point for the series, because he’s quickly back aboard a Starfleet ship with a new crew that includes new cast-mates Alison Pill and Santiago Cabrera.

6. He’ll be joined by more “Star Trek” alums, including Data (who died at the end of “Nemesis”).

Stewart will not be the only “Star Trek” actor reprising his role on the CBS All Access series. The android Data, who “died” at the end of 2002’s “Nemesis” appears to be alive and well, and will be joined by his former “Next Generation” crew including Commander Ryker (Jonathan Frakes) and Deanna Troi (Marina Sirtis).

That’s right. The alien race that has tormented Picard throughout “Next Generation” and the films is back, though in what capacity is unclear. Jeri Ryan is reprising her role as Seven of Nine from “Star Trek Voyager,” and Jonathan Del Arco will return as Hugh the Borg. The trailer also showed a brief glimpse at their spaceship, The Borg Cube.

8. It will include a tie-in to the most recent “Star Trek” film series.
The one plot detail that Kurtzman would actually confirm will be a tie-in to J.J. Abrams’ 2009 reboot of the franchise “Star Trek.”

Picard’s storyline will incorporate the destruction of Romulus — the Romulans were a primary antagonist for Picard and the “Next Generation” crew — and whatever happened appeared to be so bad that it led Picard to leave Starfleet behind.

Romulus’ destruction will be familiar to those who’ve seen the three rebooted “Star Trek” films that JJ Abrams kicked off (Justin Lin helmed the third film, “Star Trek Beyond”).

In 2009’s “Star Trek,” the Romulan Nero (Eric Bana) blames Spock (Leonard Nimoy) — now an ambassador — for the destruction of his home planet, which was destroyed by a supernova. This supernova sucks in both Nero and Spock, flinging them back in time by 150 years, and bringing Nero face-to-face with the U.S.S. Kelvin. This is important because George Kirk, the father of legendary captain James T. Kirk, is aboard this ship and ends up sacrificing himself to save his wife and newborn son.

That event creates an alternate timeline — dubbed “The Kelvin Timeline” — that the rebooted franchise, which includes “Star Trek: Into Darkness” and “Star Trek: Beyond,” exists in.

9. It will be the second-furthest in the future that any “Star Trek” property has explored (thanks “Discovery!”).“Star Trek: Picard” will pick up sometime around the turn of the 25th century (2399), which represents the second-furthest any “Star Trek” property has explored. It was going to be the furthest, until “Star Trek: Discovery” blasted its crew some 950 years into the future, which places it sometime int he 32nd century.

Even so, Kurtzman said “Picard” will not get carried away with too much futurism. “No matter what choices we’re making about portraying the future, it has to feel grounded,” he continued. “The easy thing to do is come up with crazy floating skyscrapers and the clichés of science fiction. We’ve tried to avoid that across the board.”

10. It’s called “Star Trek: Picard.”
This followed months of informally calling it that.