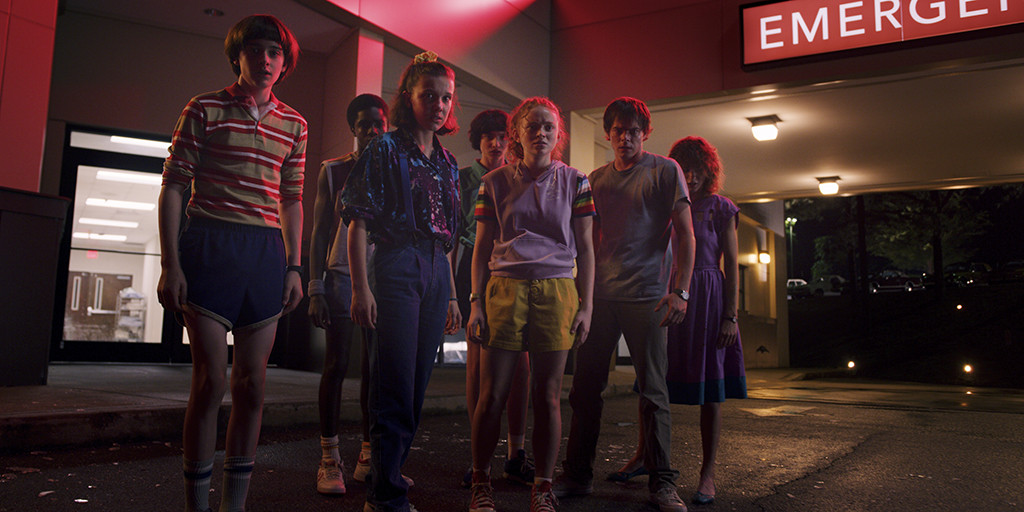 It’s summer in Hawkins, and all is well. Right? Wrong.

The Stranger Things season three trailer is here and while it looks like everything is all fun in the sun, a new danger lurks—and even comes above the surface.

The mullets. The fashion. The teen angst. The Eggos. The aerobics classes. The monsters. It’s all in the trailer below.

“We’re not kids anymore. I mean, what did you think? We were just going to sit in my basement all day and play games for the rest of our lives?” Mike (Finn Wolfhard) says.

There are plenty of glimpses of the new Starcourt mall, a fair—nothing bad happens at fairs, right?—the new mayor played by Cary Elwes and Joyce (Winona Ryder) looking like she’s really going through it.

“One summer can change everything,” the trailer teases.

Something that hasn’t changed? The friendship between Steve (Joe Keery) and Dustin (Gaten Matarazzo), even if Steve does seem to have a new friend in coworker Robin, played by newcomer Maya Hawke, who’s a little confused at how many child friends Steve has.

You can watch the trailer below!

Not a whole lot is officially known about season three, but the cast and Netflix have spilled a few little details, intriguing episode titles included. You can see everything we know below, along with a few new pics! 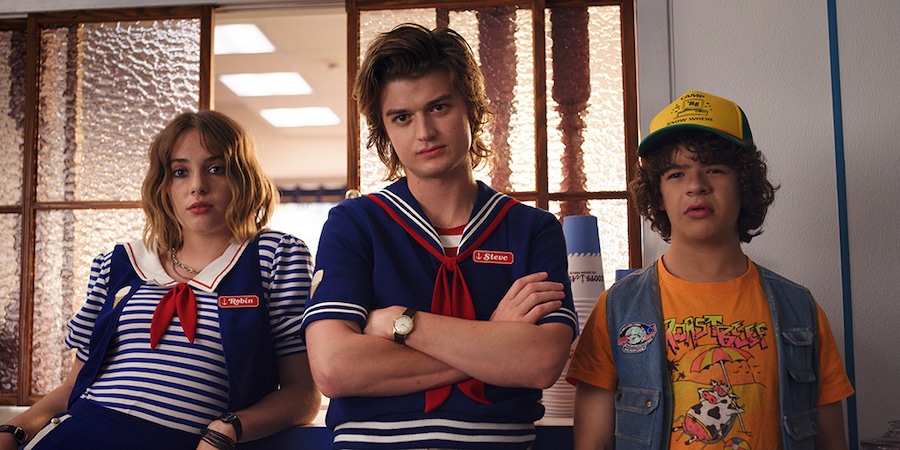 You won’t see Stranger Things season three until summer (July 4th, to be exact), a long wait after season two, which came out around Halloween 2017.

“The Duffer brothers and [EP] Shawn Levy have worked really hard,” Netflix’s Cindy Holland told press. “They understand that the stakes are high, they want to deliver something bigger and better than what they did last year, so they really want to take the time to get it right.”

“It’s going to be a fantastic season,” she continued. “It’s gonna be worth the wait.”

Holland also said that “nothing has changed with respect to Stranger Things. It’s a fantastic season, there are more special effects and I think it’s gonna be a really exciting season, but it just takes a little more time.” 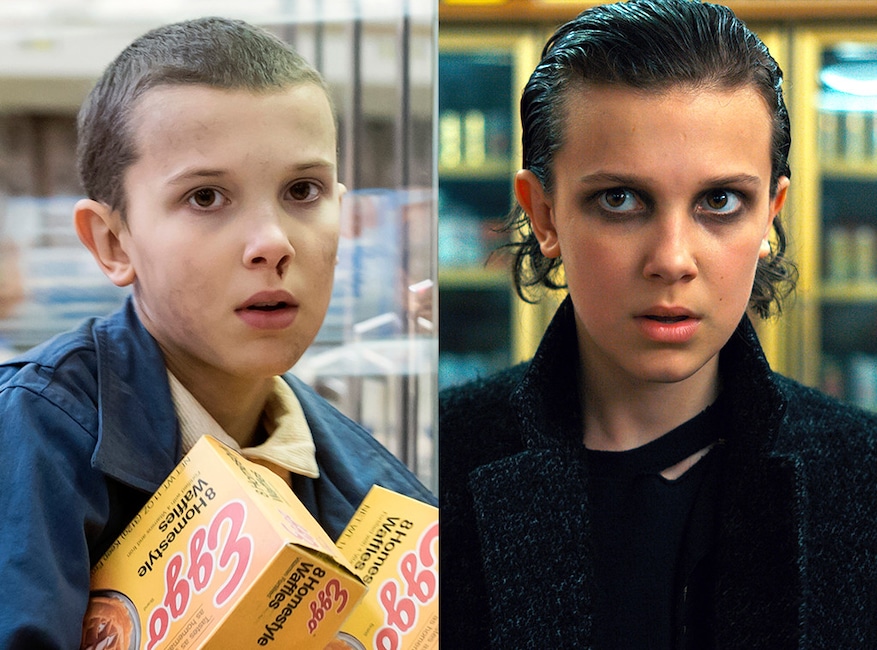 “Eleven’s style has escalated,” Millie Bobby Brown told E! News, referring to the “bitchin'” makeover her character got at the end of season two. “It’s the summer of love, which means definitely more romance between our lovely couple ‘Meleven.'” By “Melevn” she means Mike and Eleven, naturally. 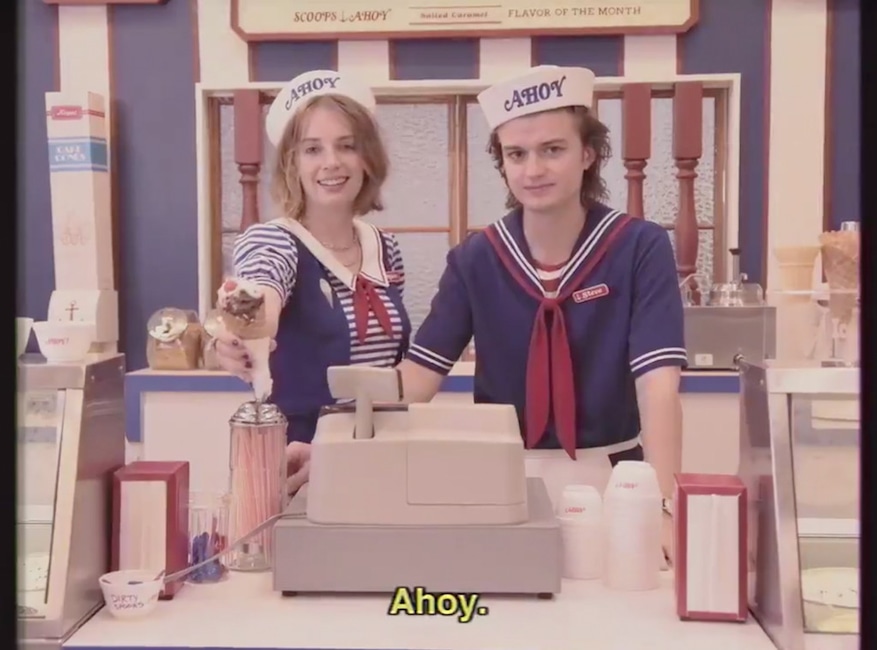 Maya Hawke will play Robin, Steve’s coworker at the ice cream place in the new mall in Hawkins. In addition to Hawke, the cast of season three will also include Jake Busey as a journalist named Bruce, and The Princess Bride veteran Cary Elwes as Mayor Kline. The mayor is described as a politician who is more focused on his own image than serving the people of Hawkins.

The mall, specifically the ice cream show Scoops Ahoy, will play a big part in the series’ third season. 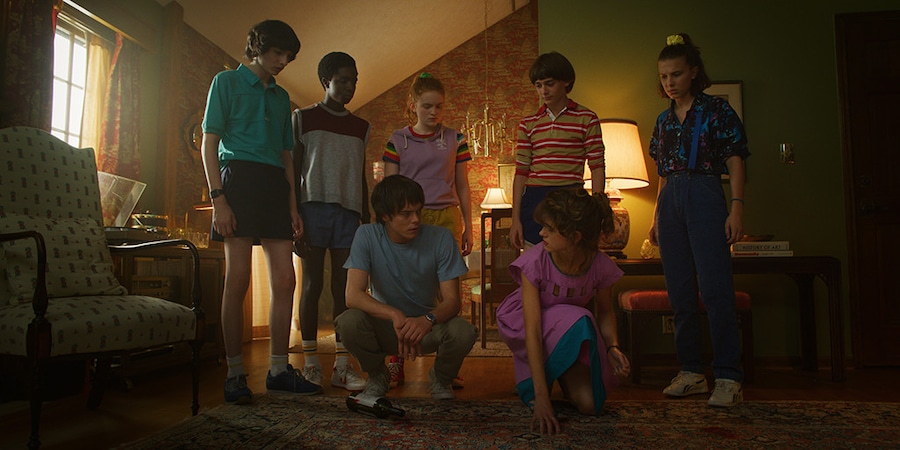 The Duffer Brothers are still waffling on exactly how long the series will go, but four seasons seems to be the idea so far.

“I think, you know, four to five seasons is likely where we’ll end up, but who knows?” Ross Duffer told us at the premiere. “I mean, none of this official, and we know where we want to go. We’re trying to figure out still how long it’ll take to get there, so we’ll see.”

Matt Duffer added, “It’s hard, like four seems short, five seems long. So I don’t know what to do.” 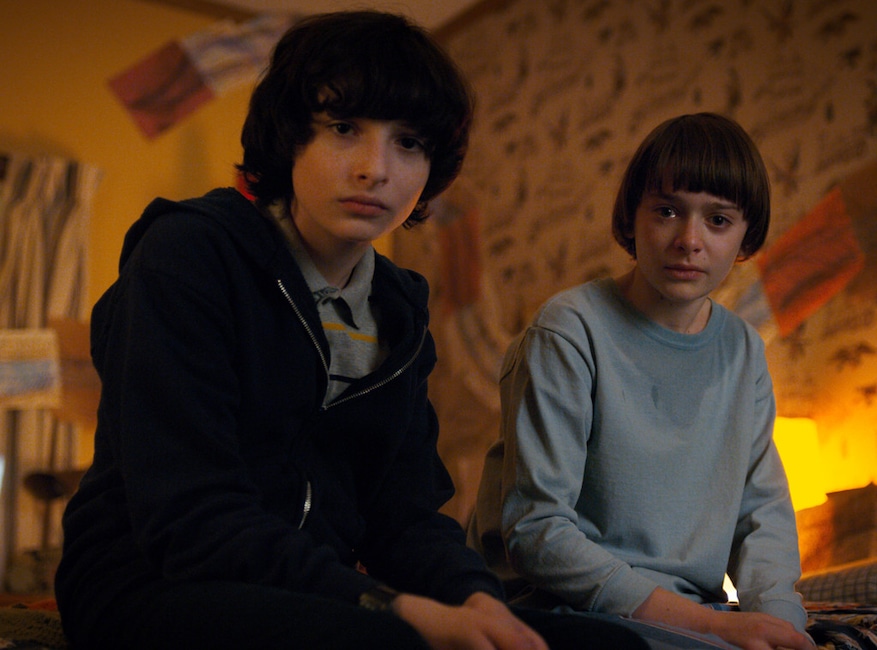 There will be a time jump for sure, the Duffer Brothers confirmed to us.

“We don’t know how long, but the kids are growing up,” Matt said. “But it’s good, it makes the story evolve.” Translation: expect about another year time-jump. 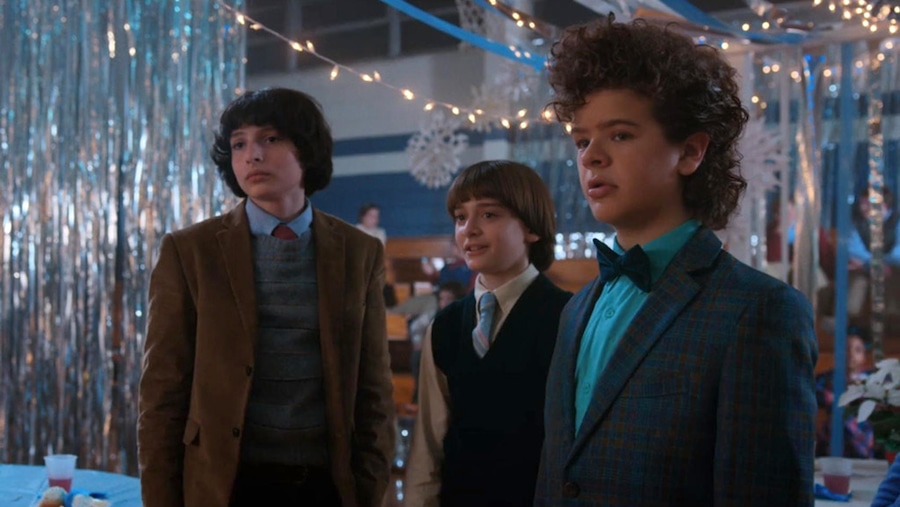 Get ready for high school, nerds. Yep, the kids will be entering high school in season three, as Matt confirmed on Beyond Stranger Things. (“We will be needing new teachers!” director Shawn Levy said.)

And fans can look to the final scene, set at the Snow Ball, for clues as to what’s ahead for our group of kids, according to the show’s costume designer, Kim Wilcox, who said their outfits are signs of  who they “might be becoming” in future seasons.

“It’s a bunch of kids who are just on the cusp of becoming adults, it’s their first time at a lot of these things,” she told us. “There’s a little bit of awkwardness, but it was really fun to see where each boy’s personality might take us in the fitting, see what was right for them.” 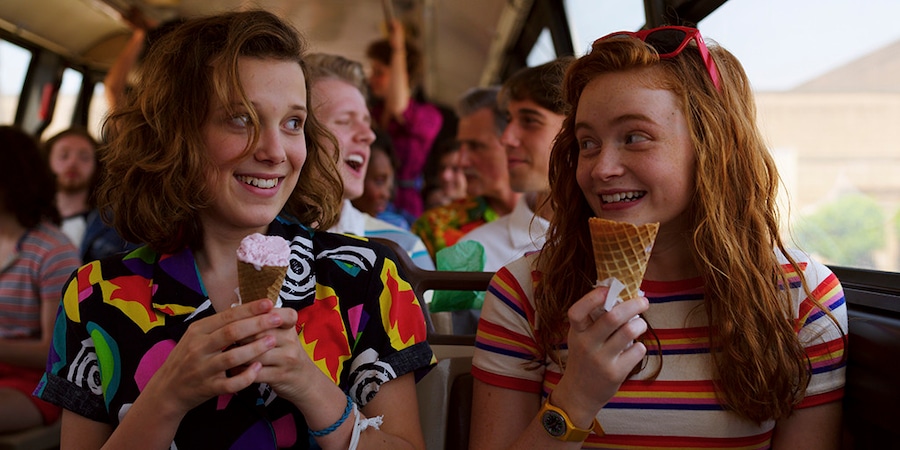 Though she eventually saved the day, Eleven’s big hero moment in the finale may come back to haunt her…as she seriously pissed off that monster.

“This thing is very aware of Eleven,” Ross said during Beyond Stranger Things. “I would be worried about Eleven. You slammed the door on him.” Millie Bobby Brown simply exclaimed, “I’m screwed!”

Aside from dealing with monsters and closing gates, Eleven will also be facing—gulp!—being a teenage girl. “It’s a little bit of a complicated dilemma with everyone wanting her to live a somewhat regular life,” Matt said. “She’s becoming a teenager with increasingly intense powers. I could see a lot of things going not so well.”

The Duffer Brothers are still keeping the big bad’s ultimate goal a secret, but Matt did tell Vulture, “It’s implied that it wants to take over Hawkins, and continue to spread beyond that. In that way, it’s very much like a virus that could take over the whole planet.”

After meeting Kali (aka Eight), fans can expect to meet more of the children that were experimented on in future seasons. “I can’t imagine that the world will only ever know Eleven and Eight,” Levy told us at the premiere. “I think we’ve clearly implied there are other numbers.” 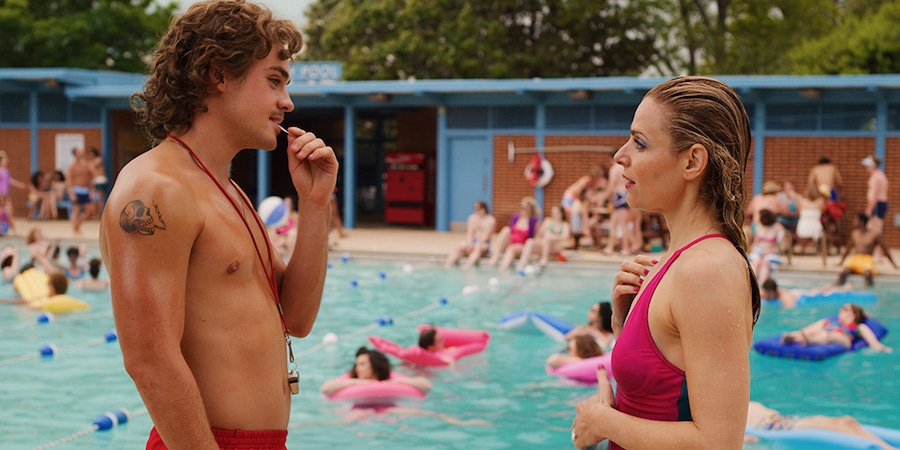 Dacre Montgomery stole many scenes as Billy, Hawkins’ new resident bad boy and the show’s human villain. But he was actually supposed to have a “bigger role” in season two.

“We ended up having so many characters it ended up, in a way, more teed up for season three than anything,” Matt revealed to Vulture. “There was a whole teen supernatural story line that just got booted because it was just too cluttered, you know? A lot of that’s just getting kicked into season three.”

As for that now-iconic cookie moment with Mrs. Wheeler? Everyone is hoping for a hook-up in season three. “I feel like the word needs that,” Levy said during Beyond Stranger Things.

“I think it’d be hot…Ted is not satisfying her,” Matt said, with Ross adding, “She’s lonely, if you notice she always has a glass of wine!” 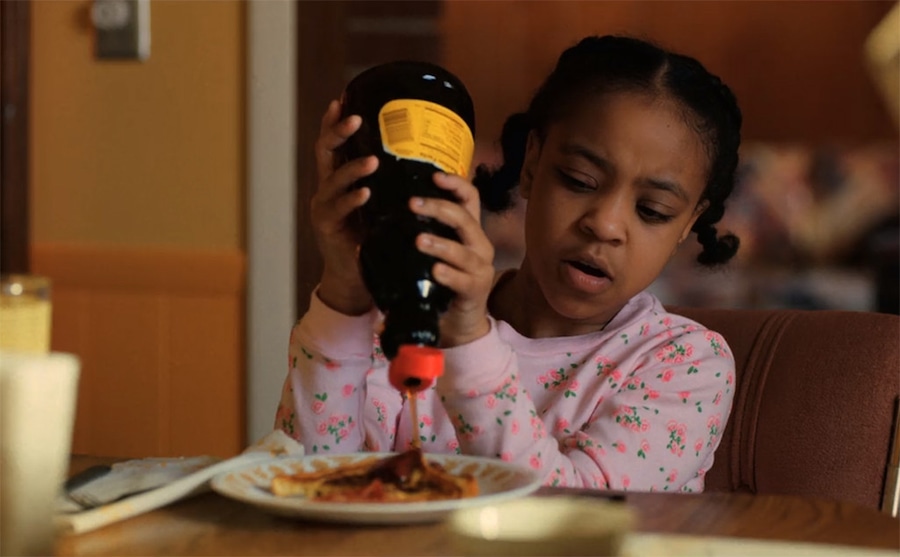 Speaking of scene-stealers, let’s all take a moment to bow down to Erica, Lucas’ sassy little sister, played to perfection by Priah Ferguson. Originally, she was only supposed to appear in one scene, but after filming it, the Duffers kept finding ways to add Erica.

“There is no version of season three where Erica doesn’t have a majorly expanded role!” Matt told Vulture. “She’s got to. She’s too good.” 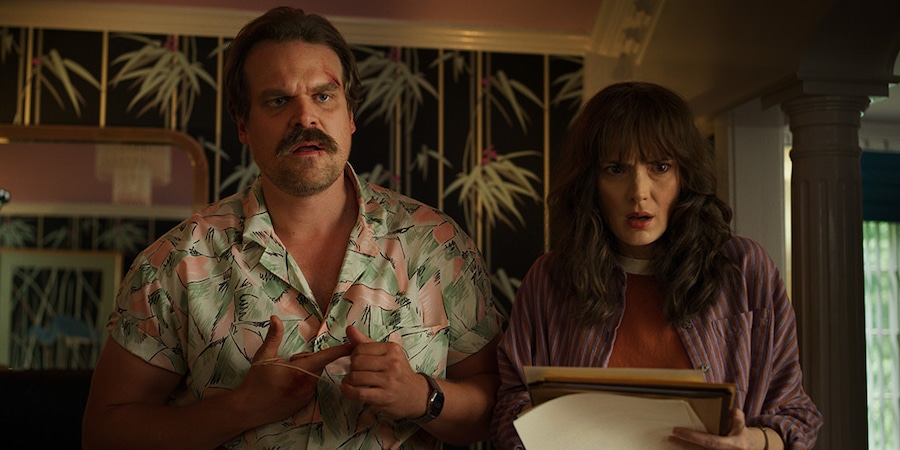 Is that Joyce and Hopper’s ‘ship name? Anyway, their chemistry will continue to be on display in future seasons, after Bob’s (Sean Astin) death. “There’s definitely something there. Part of it is that they’re comfortable with each other and they’ve known each other for a long time,” Ross told Vulture. “In my mind, Hopper still has some growing to do before that can happen. But [the chemistry] is definitely there.”

And Jopper’s No. 1 stan is Hopper himself, with Matt saying, “David [Harbour] is really into the idea of a Joyce-Hopper relationship.” 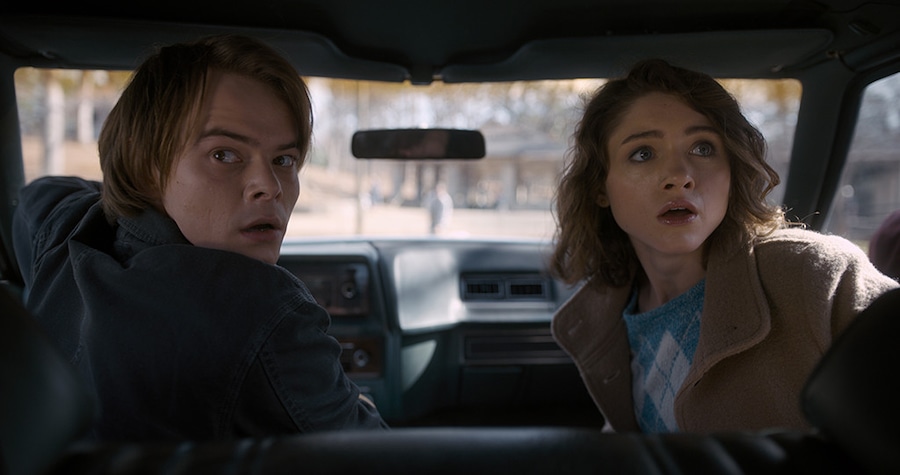 By the end of season two, Nancy seems to have chosen Jonathan over Steve, who became the world’s favorite babysitter. But judging from the lingering look Steve gives Nancy in the finale, the complicated romance situation between the three seems far from over.

“I don’t think it’s the end of the story,” Joe Kerry told us. “But I do think that the second season was a lot about him growing up and learning how to put people before him a little bit more. I don’t think it’s over… I think how they leave it is realistic.” 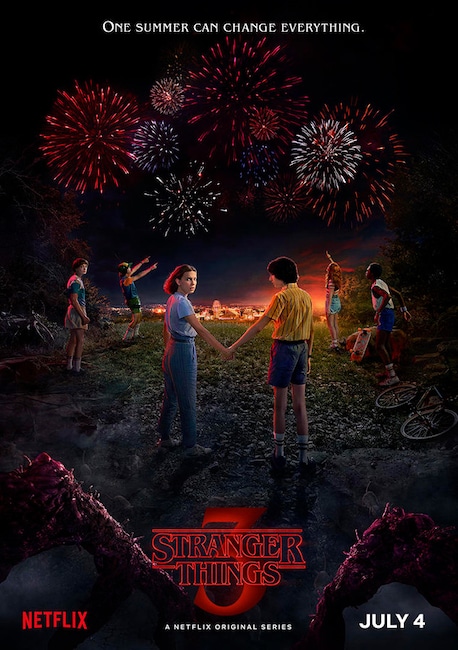 Netflix revealed eight titles for the upcoming season:
“Suzie, Do You Copy?”
“The Mall Rats”
“The Case of the Missing Lifeguard”
“The Sauna Test”
“The Source”
“The Birthday”
“The Bite”
“The Battle of Starcourt”