STRESSED Stacey Solomon has admitted that she has "given up" as baby Rex screamed while she struggled to homeschool.

Earlier today the 30-year-old star told fans that she couldn't keep up with her oldest sons' schoolwork as they remain home during the coronavirus pandemic. 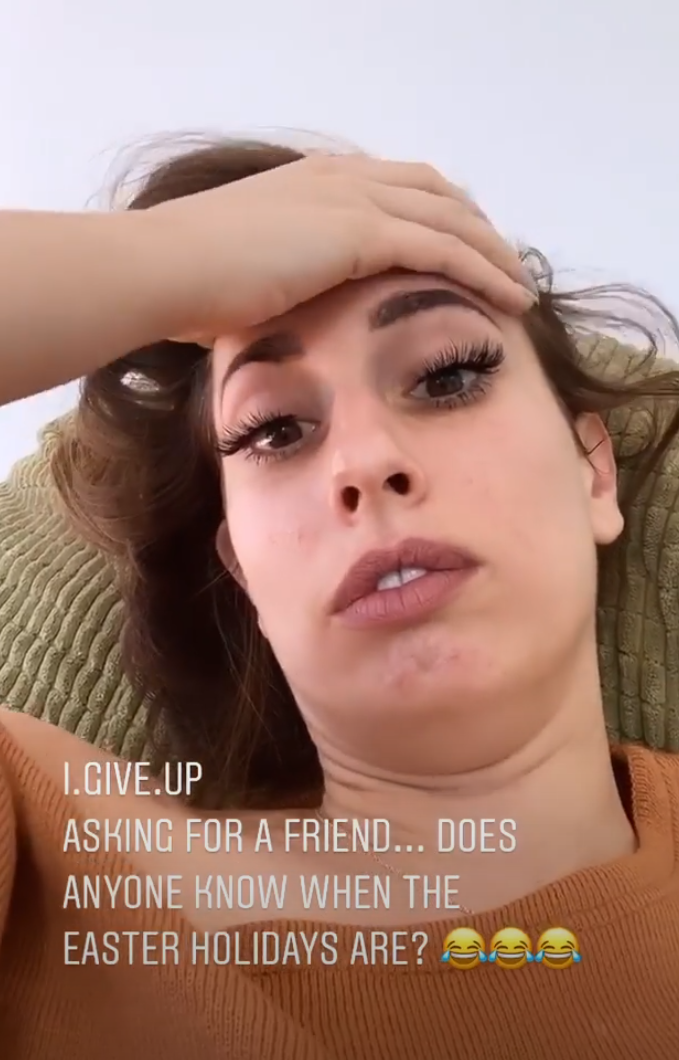 And things appear to have taken a turn, with the TV favourite taking to her Instagram Story to reveal that she'd had enough.

Filming herself on the sofa, one of her children can be heard asking when the Easter holidays are while Rex cries off-camera in the background.

Looking exasperated, Stacey admits that she has "no idea" when the break starts, captioning the post: "I. Give. Up."

"Asking for a friend, does anyone know when the Easter Holidays are?" 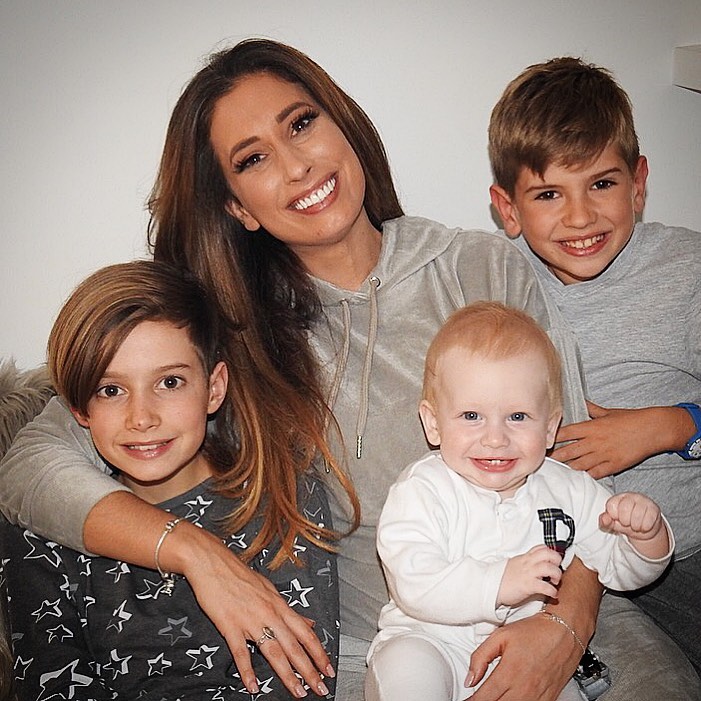 Running her hands through her hair, Stacey gives the camera a knowing look before switching off.

Thankfully, she soon managed to get 10-month-old Rex down for his nap, sharing a snap of herself looking much more peaceful while the little one snoozes in her arms.

"Home school is over for today. The boys are playing their games, I'm saying goodbye to pre-fix's and Spanish quiz's and hello to a giant glass of Coke." 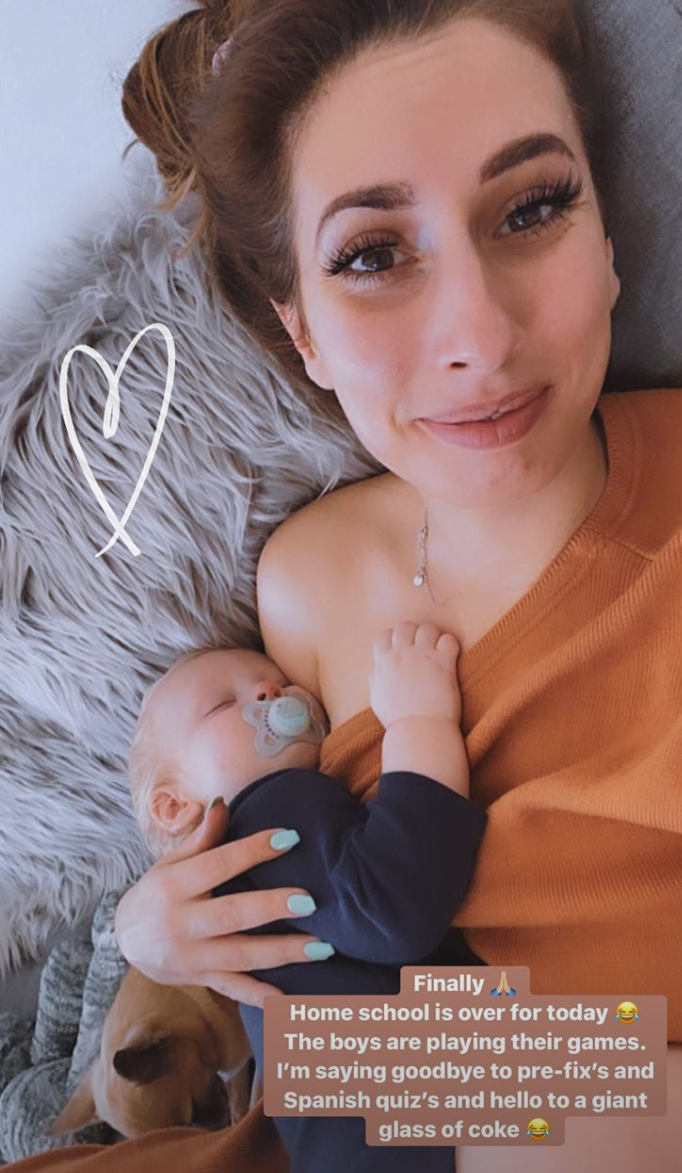 Stacey is mum to 12-year-old Zachary, and seven-year-old Leighton, in addition to baby Rex.

This morning, the star related to parents up and down the country as she candidly shared: "Schoolwork is coming in thick and fast and we are NOT keeping up.

"It does make me feel anxious but I keep reminding myself we can only do what we can and try our best.

Earlier this week, Stacey admitted that she was "s***ing" herself after Prime Minister Boris Johnson announced plans to put the UK in lockdown. 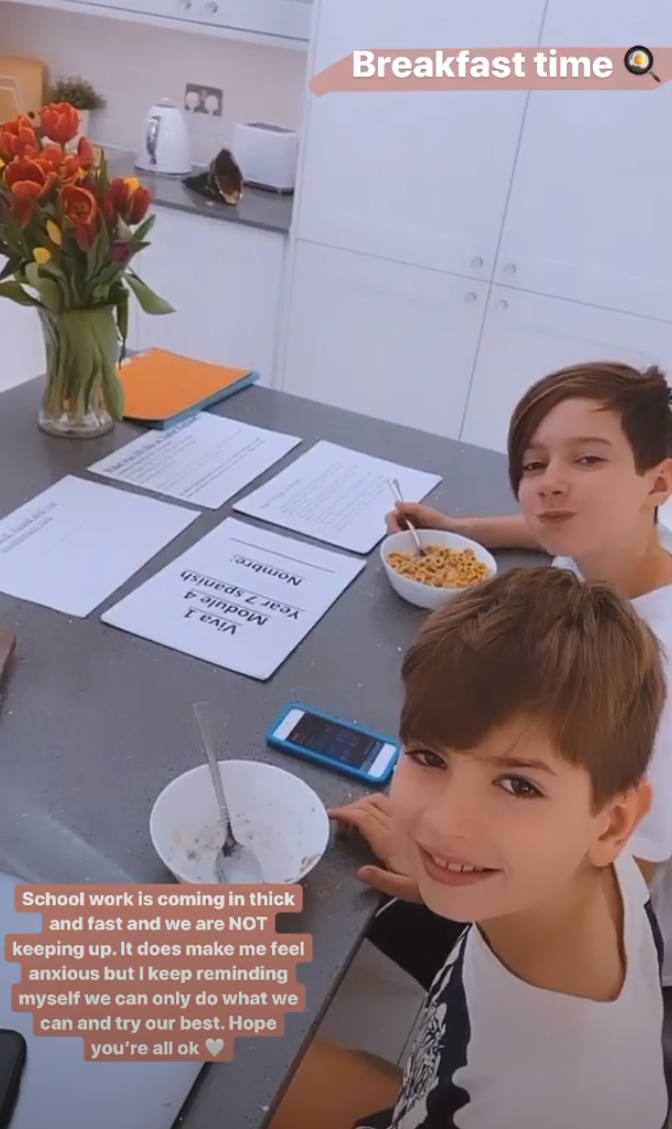 Brits are only allowed to leave the house for one of four essential reasons, with Stacey telling her followers at the time: "I wanted to come on here and say if anyone else out there is absolutely s***ting themselves, you are not on your own.

"It's such a scary time at the minute and I'm going to do whatever I can to be as upbeat and positive as possible on here."

Stacey isn't the only celebrity struggling to keep up with homeschooling demands, with Peter Andre documenting his busy day at home yesterday trying to help all four of his children.

Schools were closed indefinitely on Friday [20th March] aside from the children of key workers as the government battle to get on top of the deadly virus.