STRICTLY star AJ Pritchard has recalled the horror moment the “love of his life” was engulfed in flames when an online video stunt went horribly wrong.

The dancer says “seconds felt like hours” as Abbie Quinnen’s hair and clothes caught fire while they were filming. 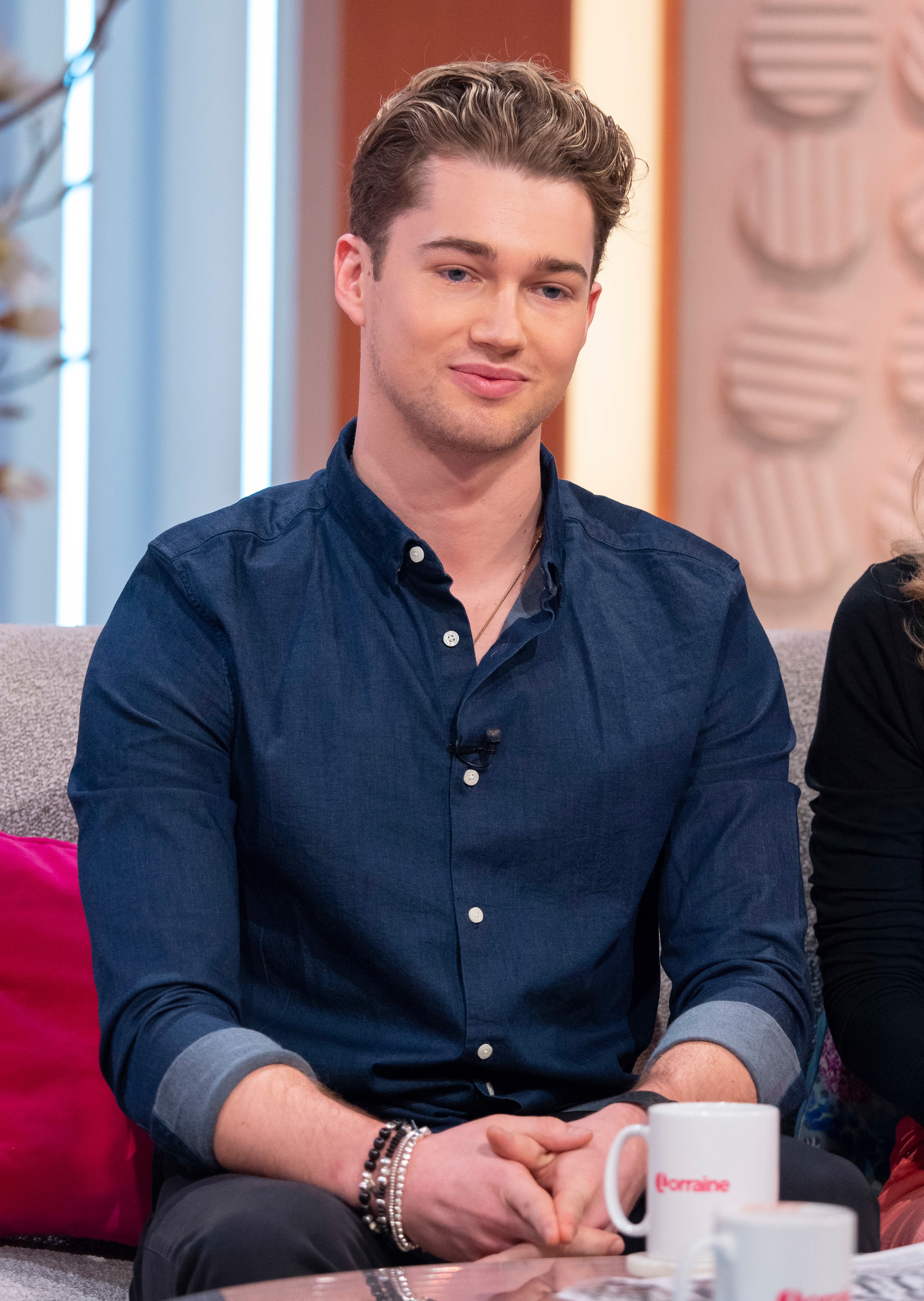 His quick-thinking probably saved Abbie’s life — as he managed to extinguish the flames, then kept her conscious before his brother Curtis rushed them to hospital.

But the terrifying incident has left AJ with terrible flashbacks and he believes he will need to seek professional help to deal with it as he will never forget what he saw.

He fought back tears as told of his shock at seeing girlfriend Abbie ablaze and then revealed how he coped with meeting her for the first time after her hospital treatment.

AJ said: “It was just a complete freak accident and what is scary was that helplessness. It felt like time stopped for me. What was seconds, felt like hours to put out the flames. 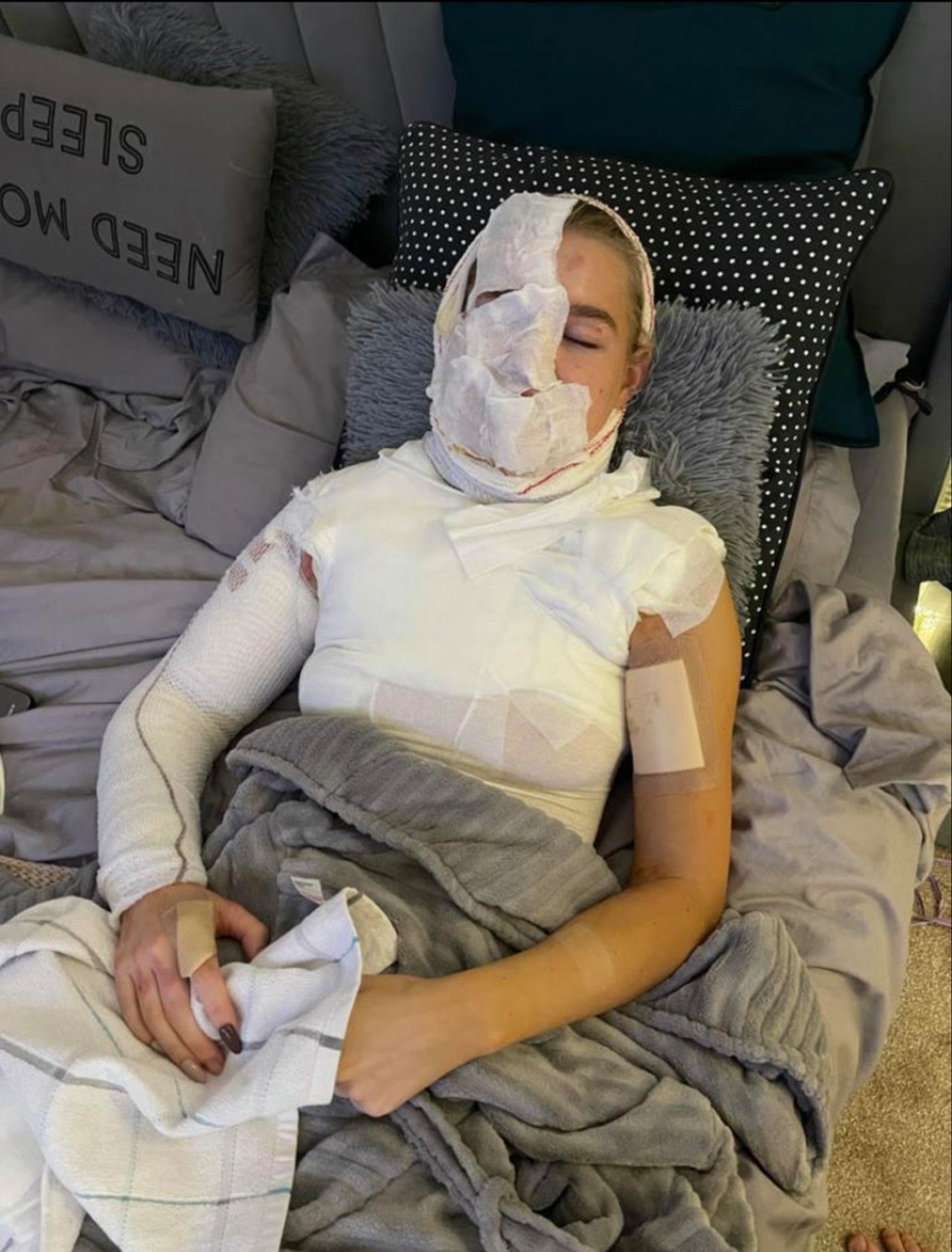 “We had to put wet towels on her to cool her skin, then to get her from the flat in West London to A&E.”

AJ, 26, and professional dancer Abbie, 23, were filming a life hack video, showing their million Instagram followers how to cut a glass bottle in half to use it as a vase.

It felt like time stopped for me. What was seconds, felt like hours to put out the flames.

The risky trick involves dipping a rope in a flammable chemical, wrapping it around the bottle and setting it alight.

Their attempt ending in the bottle blowing up, sparking a fireball that engulfed Abbie.

AJ, who also appeared last November on I’m A Celebrity, put out the flames and called 999. 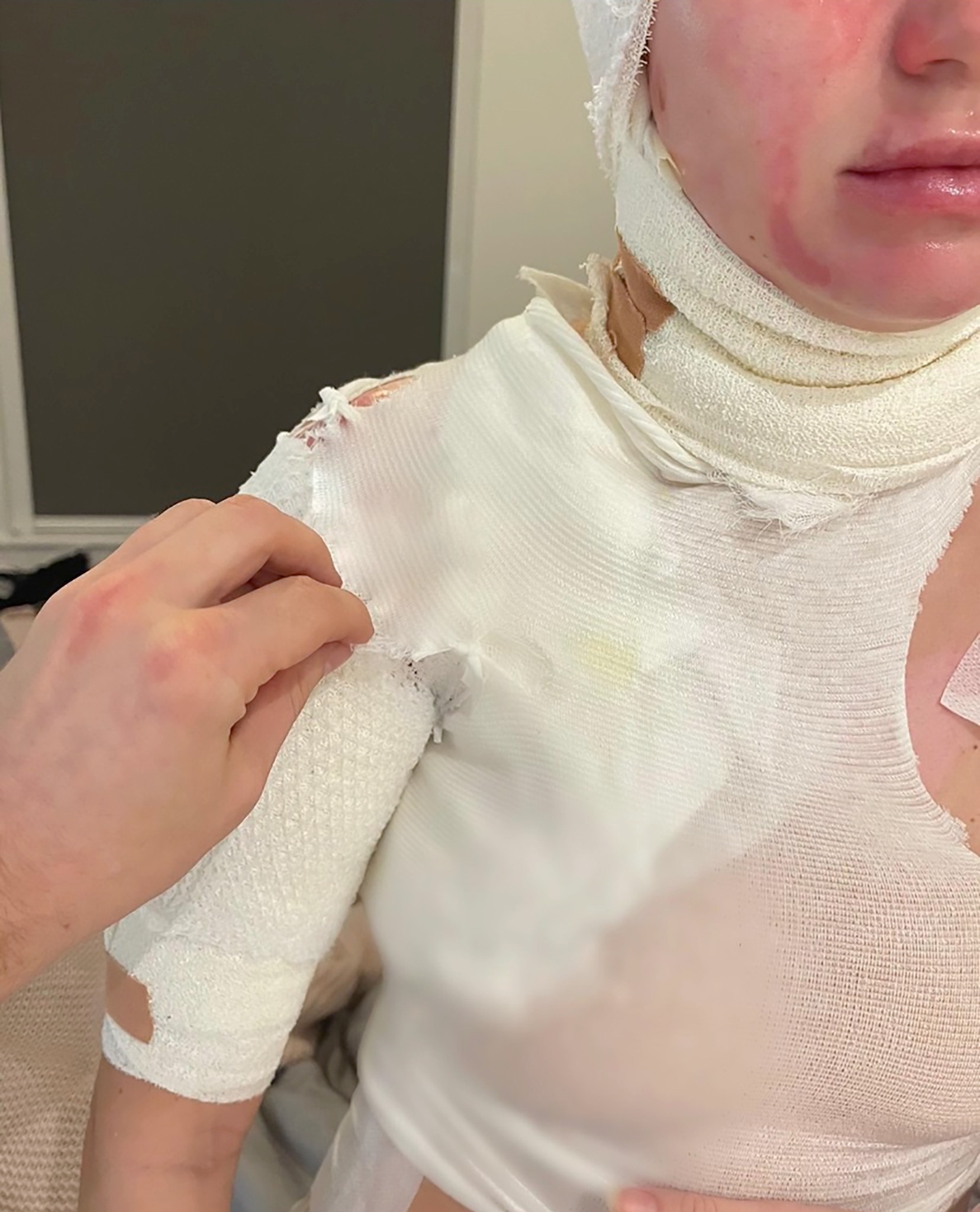 But on being told there would be a wait for an ambulance, brother Curtis — a 25-year-old dancer who has appeared on Love Island — sped them to Ealing Hospital 20 minutes away where Abbie went into intensive care.

AJ explained how his priority was to keep her awake and breathing on the frantic journey.

He said: “The burns were one thing but the most important thing was Abbie’s breathing and sight.

“These are things that were very much a concern, one of the major things with the hospital had to monitor 24/7. 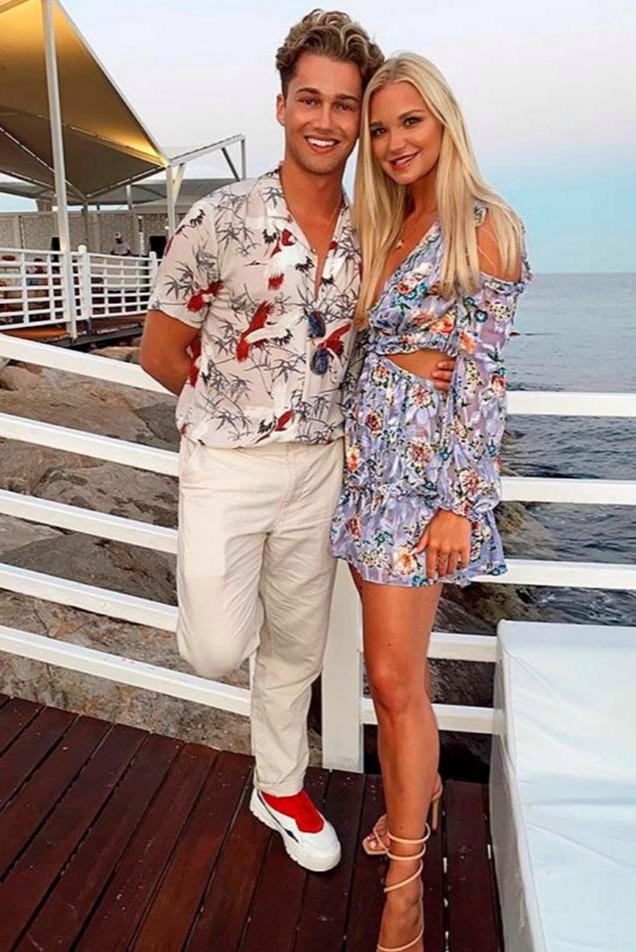 “When you have burns, it’s also inhalation and, as it was her face, her sight.”

The incident on January 19, left Abbie, with third-degree burns and her doctors fighting to save her face and arms from severe scarring.

She has since made 20 hospital visits and needed three skin grafts, raising fears for her career.

AJ said: “We’re both in the entertainment industry and our faces, our looks, are something that we are grateful for and we do use. 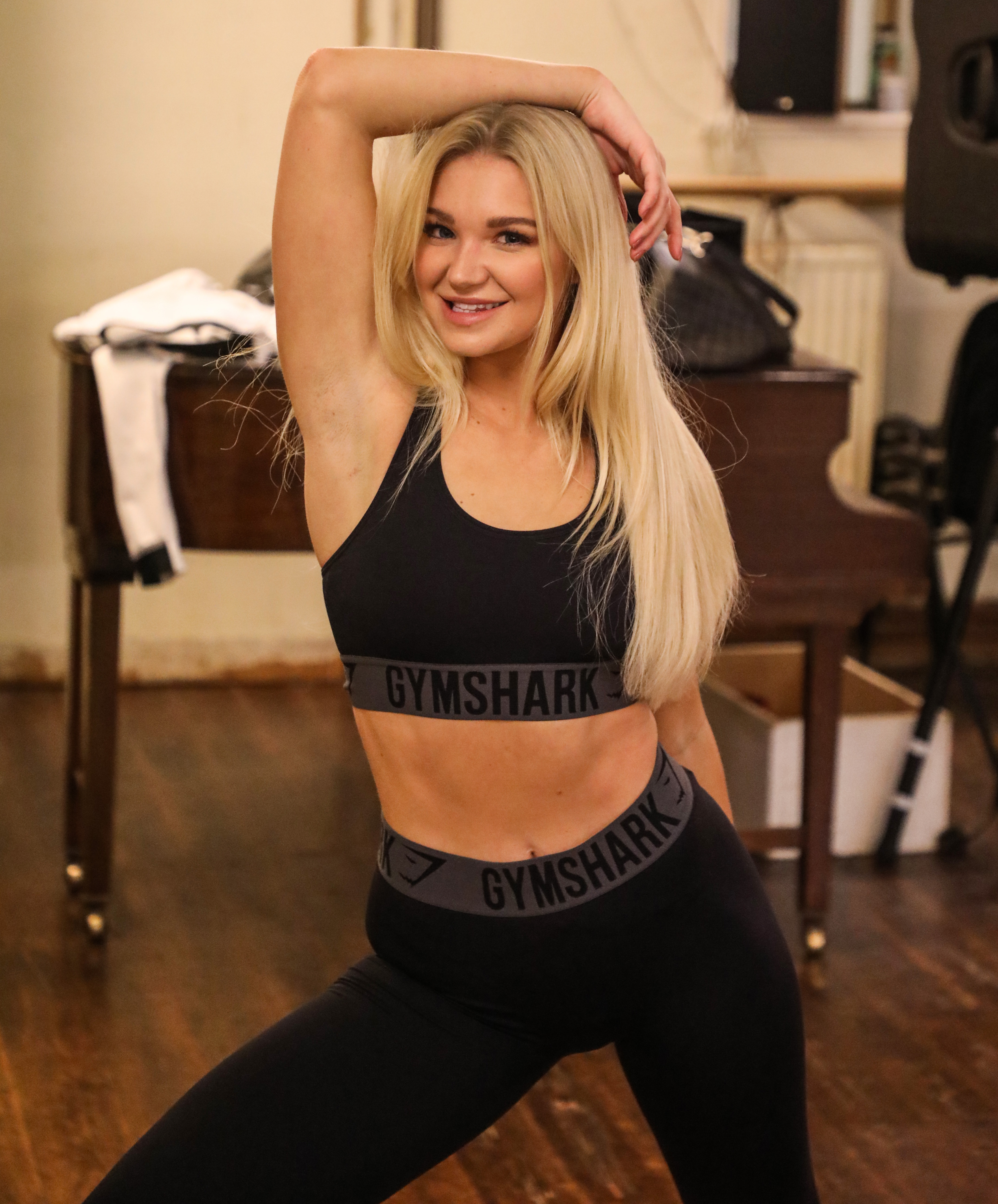 “On that night, I tried to keep her calm and keep her focused on how we were going to help and how the NHS would do everything in their power as quickly as possible.

“But with time, they will heal and other areas will heal. The most important thing was that the skin grafts worked.

“The surgeon was very happy with the way that went and seeing the improvement from week to week. 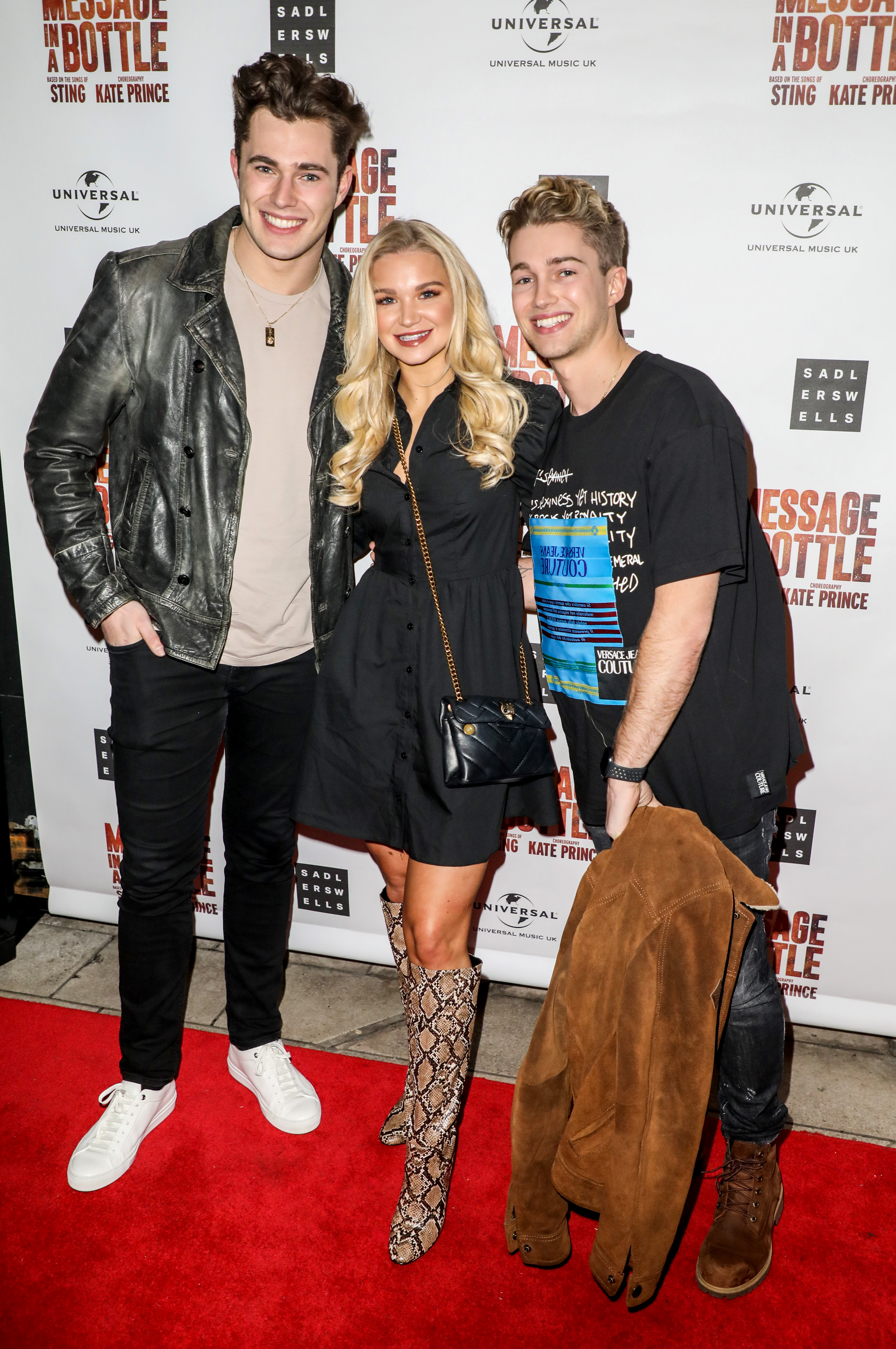 “It is quite a bit overwhelming how strong the skin actually heals and works so incredibly.

“Obviously, our minds are one thing but our bodies can do incredible things for us. There is gonna be small marks there but, right now, everything’s going really well — and that’s what we can focus on.”

Abbie spent the night in intensive care before being transferred to ­Chelsea and Westminster Hospital’s specialist burns unit where she spent three more days.

Owing to Covid-19 restrictions, AJ was not allowed to visit her, instead holding a vigil in the hospital car park while on the end of the phone. 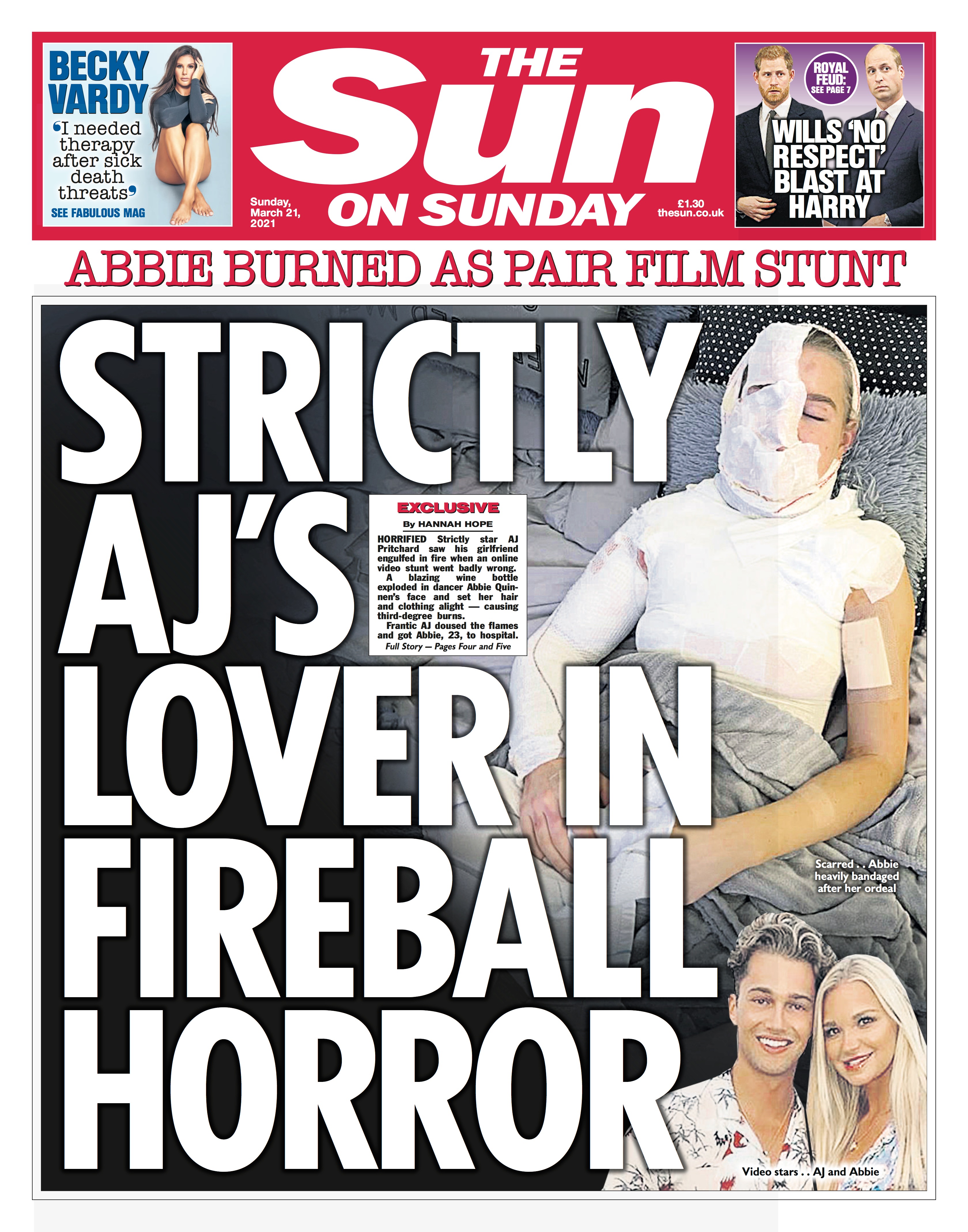 He said: “After I handed her over to the nurses and sat in the car, I just couldn’t even speak. My body had completely shut down, I was so emotionally all over the place.

“I was just a complete mess and completely emotionally torn apart inside and I sat in the car, physically shaking. I couldn’t be all over the place in front of her. When she was handed over, I just was gone.”

After four days apart, and contact only via phone, AJ says a heavily bandaged Abbie did not want him to look at her when they were reunited.

Fighting back tears, he said: “She was bandaged completely. I could only really see parts of her face, her arms were bandaged, her face and everything was bandaged. 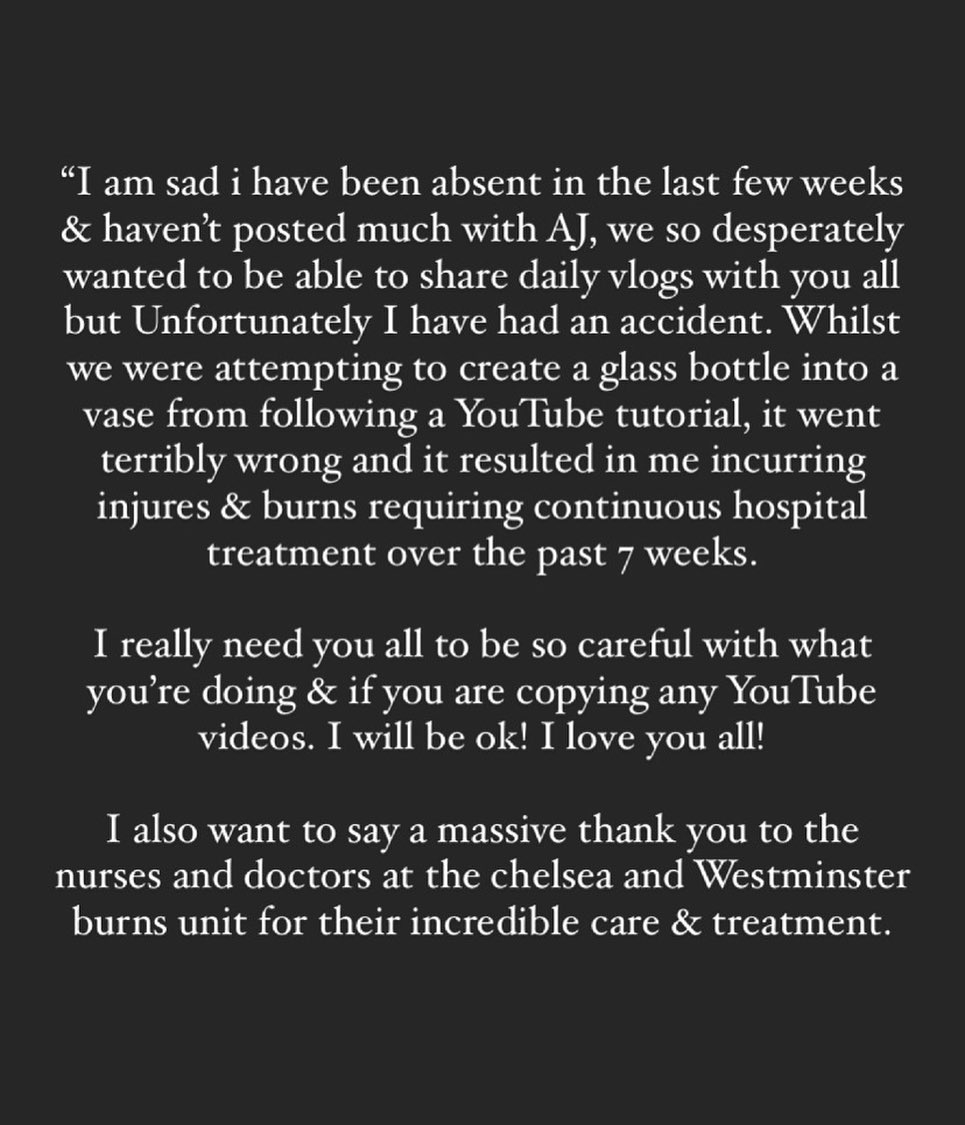 “She didn’t want me to see her. But as soon as I did see her, I just held her hand and got her home.

“Inside, I was so emotional but I felt like I couldn’t show those emotions. I had to be strong for her.

“I just felt so happy to see her, so in love, so everything was just so warm. I know she was emotional, but for me it was just the biggest relief. It was the happiest day of my life, seeing her that day.

It was the happiest day of my life, seeing her that day.

“Even talking about it now I am very emotional. Seeing her walking to me, having got out of her wheelchair, it was the hardest day of my life but also the happiest.”

Yet AJ will never forget what he witnessed and will seek professional help after suffering flashbacks.

He said: “It’s not actually caught on camera because this was done before the camera was turned on. 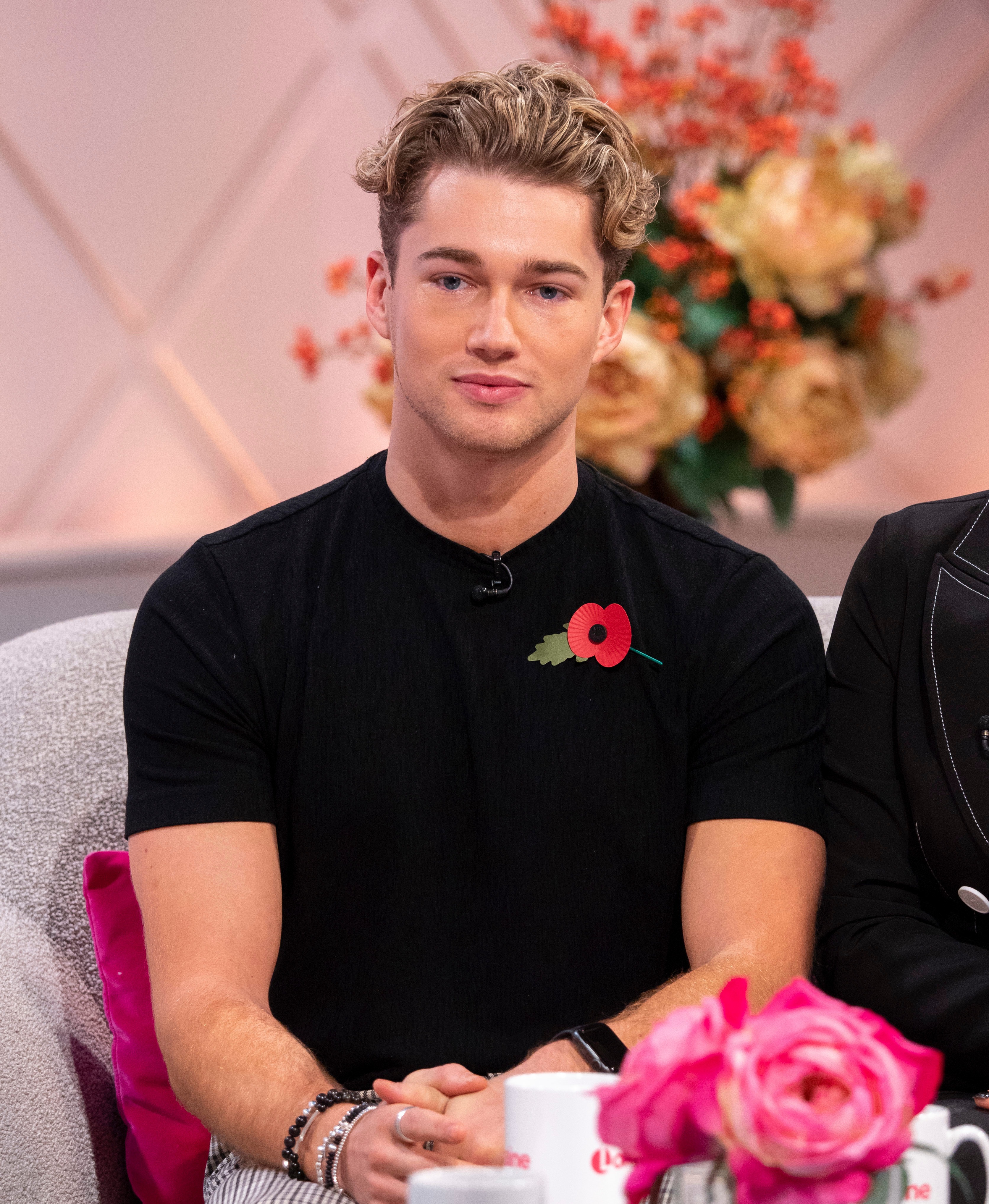 “Unfortunately, my brain is a camera and it will never forget what was seen. And thinking about it is hard.

“It’s always there and, moving forward, it will always be there.

“It is very traumatic. Certain nights, I do wake up and think about what’s happened and especially if I’m watching TV and the scenario happens which has a naked flame or something in it. 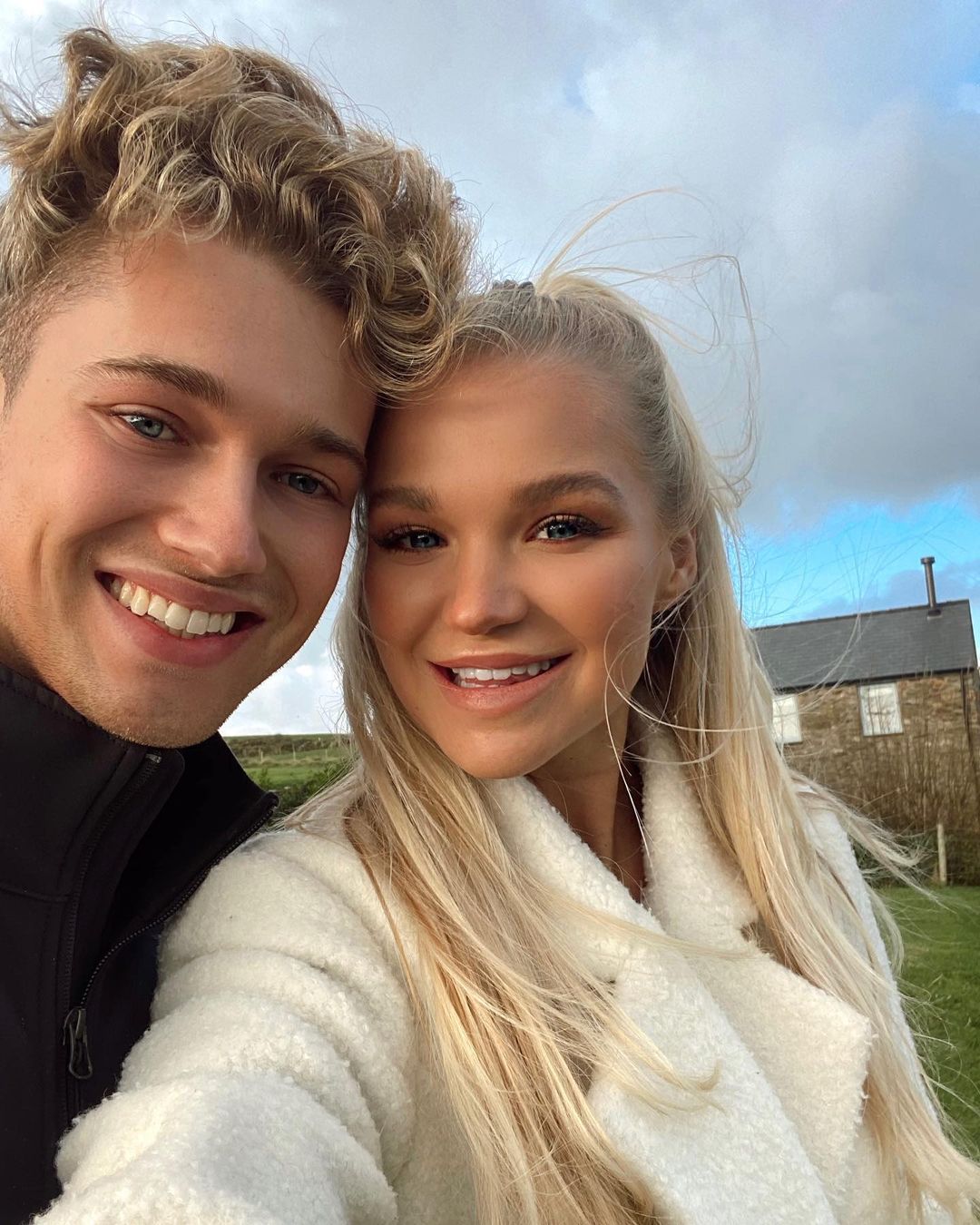 “I think the only way to help in any traumatic situation is to talk to somebody.

“Down the line, talking to somebody else professionally, it would be unwise not to take that route — especially in a year like this with mental health, it’s important for people to be open and honest.” 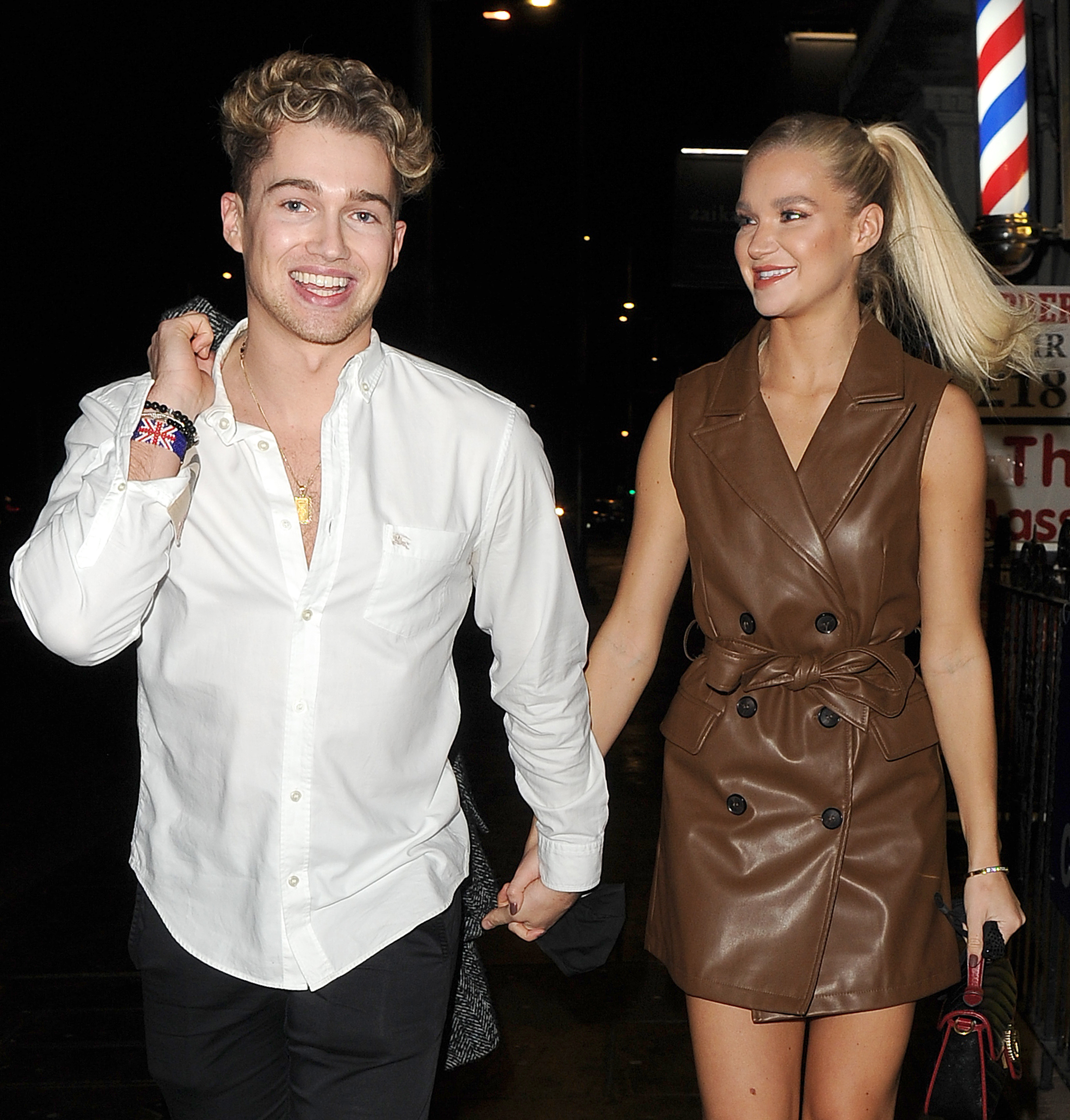 With coronavirus shutting theatres, Abbie had been making money as an influencer but has been off social media since the accident.

AJ is now pleading with the public that they do not attempt the wine bottle hack — also viewed by 7.7 million people on YouTube.

He said: “I urge them not to do that at all. Within a blink, she was on fire. It went horrifically wrong.”