Tayshia Adams’ season of The Bachelorette began tonight on ABC.

Even though she was introduced to viewers at the end of last week’s episode, the men didn’t get to meet her until this week.

While Clare Crawley’s season of The Bachelorette has been in the media throughout the summer, fans know very little about Tayshia’s season.

We know that she got to meet some of Clare’s ex-boyfriends, who felt cheated by Clare’s love story with Dale.

We also know that production brought in four additional guys to meet her.

But, is she happily engaged and possibly planning her future wedding these days?

While Tayshia can’t actually confirm anything yet, she is sharing some messages on social media.

Ahead of tonight’s episode, Tayshia revealed that it was good to be back in front of the cameras and she used the hashtag, #OnCloud9. 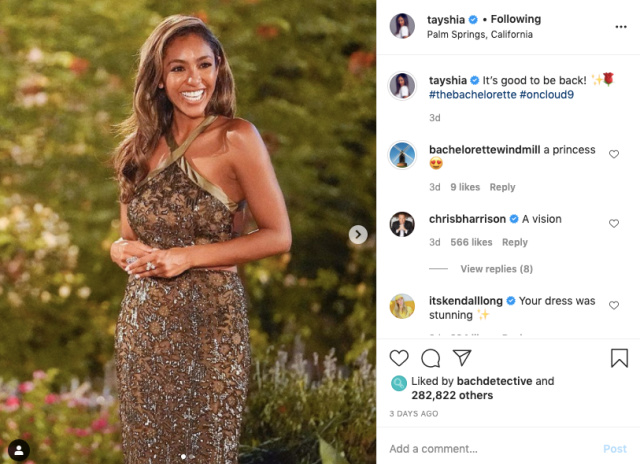 It sounds like she’s hinting that she’s very happy these days, even though we don’t really know where her season will go.

Tayshia Adams is supposedly not in a good relationship now

Reality Steve has shared the news he has received about Clare’s season, and how Tayshia’s season unfolded once Clare and Dale got engaged.

When Tayshia was shared as the new Bachelorette, fans were excited because they felt that she would save the season, as fans were not happy about Clare’s love story with Dale.

But Reality Steve has said that Dale and Clare’s engagement is the only happy ending that fans will get this year from a Bachelorette lead.

Reality Steve has hinted that Tayshia won’t be getting a happy ending and won’t get engaged.

He claims that Tayshia has fallen in love with someone from New York City and the distance isn’t working for them. Steve says Tayshia is a California girl and has no interest in moving to New York to be with her final pick.

The relationship is reportedly rocky at the moment and may not survive in the long run.

Fans will see what will happen in just a few weeks as Tayshia’s season will conclude before the Christmas holidays.