Watching television today offers you near-unlimited choices when it comes to movies, whether that’s through a streaming service or a specific premium channel. But in this era of peak content one unique feature still stands out: the pre-movie host. Whether it’s TCM’s Alicia Malone chatting about the history of Jane Russell or Joe Bob Brigg’s Southern drawl introducing “Evil Dead” on Shudder, hosts hold on and help to bridge the gap between movies and the history that created them.

Where hosts were once a matter of necessity, introducing a series and then expanding out to fill in for commercial breaks, or, as premium cable and streaming started, the absence of them, they remain a serious branding technique. You could identify a network by its hosts, whether that is the litany of horror hosts that peppered the airwaves of various local networks throughout the country, to AMC’s Bob Dorian (back when that channel was still showing classic features).

Now, as TCM and Shudder continue to soldier on for the movie host, it’s an element audiences want more of. Just last year with the debut of Disney+, writer Josh Spiegel discussed the desire for a host for that company’s classic film offerings. With such a rush of content available at our fingertips, how can the host be better utilized? And what is it about hearing someone on-screen discuss a movie that feels so welcome and comforting?

As many of the hosts, past and present, and executives of TCM and Shudder will attest to, a host becomes a familiar face for an audience to gravitate towards in what is a communal experience. Joe Bob Briggs, the host of Shudder’s “The Last Drive-In,” said the appeal of a horror host is giving audiences’ access to someone to be scared with, while TCM general manager Pola Changnon noted that hosts make watching films a more social experience.

“There’s something in our DNA that says you need to watch a movie with other people. It’s a social thing. If you watch a movie on your phone, on your laptop, by yourself and it’s a great movie what happens when it’s over? You feel extremely lonely.” It’s the equivalent of sitting with a good friend and watching a movie. “You want to feel connected, even if it’s just sitting in your living room watching,” Changnon told IndieWire.

The pre-movie host has been around in various forms since television started. Relegated to usually an hour-long format, the few series that had hosts were generally anthology programs starring a performer who was also the star, such as Dick Powell, who hosted and starred in the Alcoa Theatre series from 1957 to 1960. With commercials needing to be inserted, it was often easy for a network to expand an hour or 90-minute movie into two-hours with the addition of a host. 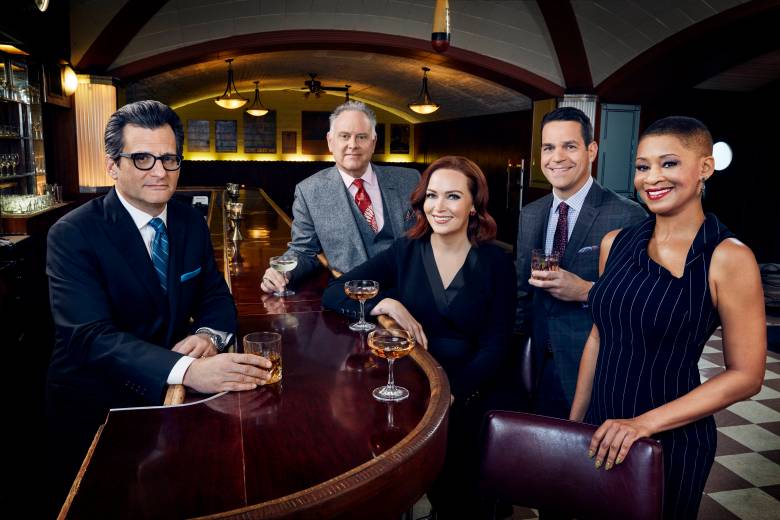 But with a sea of movies looking for a home on television grew, the need to separate the host from the performer intensified. Gimmicks became a thing, particularly for horror hosts, such as Maila Nurmi’s Vampira or Cleveland’s Ghoulardi (real name Ernie Anderson), who controversially was known to blow up children’s toys on his show with dynamite. Horror has always been the most easily accessible avenue for a host, with nearly every local station from the 1950s-1980s having their own host. Shudder’s curator, Samuel Zimmerman, said it goes as far back as campfire stories, with the audience having a signal when to be frightened or when to laugh.

However, outside of gimmickry there’s also a desire to find authenticity within a host, whether that’s Briggs’ laconic personality drinking a beer while introducing a feature, to TCM’s crop of diverse stable of hosts. Ben Mankiewicz, TCM’s longest running on-air personality, calls television “an artificial environment and it makes people artificial” and because movies are such an emotional medium — people connect movies to all manner of events in their lives — Mankiewicz said it’s impossible to be fake. Thus, who he is on-camera is how he is in real life. “The host is your friend,” Briggs said, and that’s vital. It’s also oddly prescient in a world where people on social media are now creating brands around their (presumed) authentic selves.

That authenticity can also turn around and bond an audience deeper to an on-air personality. Before Annabelle Gurwitch was a New York Times best-selling author she was one half of TBS’ “Dinner and a Movie.” Each week Gurwitch, alongside co-host Paul Gilmartin and chef Claude Man would introduce and discuss a particular movie while cooking a meal. Gurwitch told IndieWire doing the show made her feel she was “in communication with the audience” who’d enjoy the banter between her and Gilmartin that wasn’t unlike watching two good friends interact. Gurwitch added that fans of the series who might have children or otherwise couldn’t go out could still have an experience by watching the pair cook.

Still, like all facets of entertainment, hosting has also had its own growing pains to be more inclusive. TCM introduced Tiffany Vazquez as their first Latina host in 2017 and Alicia Malone in 2018, and debuted Jacqueline Stewart as their first African-American host last year. Chagnon said it’s not as simple as plugging a person into the job and noted that “It’s not about people who can do a good job in front of a TV camera.” For the network, it’s about who has an affinity for the material, “a deep subject matter expertise [and] a real understanding of why it’s valuable to our culture.” That being said, Chagnon understand it’s a strategic choice to add more diverse hosts, but the intention is to always go with the best person.

Cassandra Peterson, better known as the legendary “Mistress of the Macabre” Elvira, said horror hosting has generally been a good mix of men to women and cited the aforementioned Vampira and 1960s horror host Moona Lisa (Lisa Clark). For Peterson, whose buxom horror persona could have easily been used in an exploitative manner, she never worried about having control of her character because she did everything. “Once in awhile I’d get complaints about the cleavage and the studio boss would come in and say, ‘You need to raise that neckline’ and I’d say ‘okay’ and I never would.”

For Gurwitch, there were certainly difficulties being the lone woman on “Dinner and a Movie.” She says she would attempt to infuse more history and commentary on the movie — standing on a literal box of soap — while laughing along with some of the weirder elements writers would come up with, like letting a fictionalized “superfan” eat sushi off her stomach. “I felt a little bit out,” says Gurwitch. “It was important to me to hold my own as a female.” When Gurwitch became pregnant there was little network support. “I felt like they [the network] wanted to preserve my cuteness and the idea of being pregnant couldn’t be cute” this in spite of knowledge that couples with children were watching the series. “I spent a lot of months with big mixing bowls in front of me.” 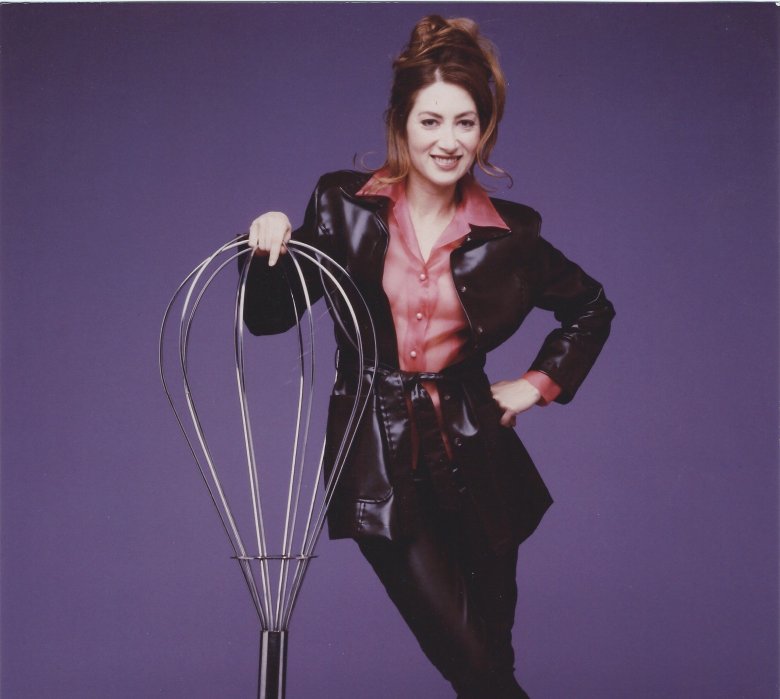 Annabelle Gurwitch in “Dinner and a Movie”

Even more frustrating was Gurwitch’s departure from the series was not of her choosing. “The executives at the time of the show…said to me ‘We think we can get higher ratings if we hire a younger woman.” The quest for ratings, particularly with female hosts is acknowledged. Peterson said when she was starting out, executives were happy to let her wear revealing clothing because it translated to higher ratings. “When this happened” Gurwitch said, “my agent said, ‘don’t tell anyone you were fired because you just turned 40 and you’ll never get hired again.’”

Gurwitch would continue to act, turning to writing, and understands she was replaceable. The frustration was that her Gilmartin was never given that proposition and, more importantly, “I wish I had the courage to stand up [at the time].” Gurwitch would refuse to participate in a plan by the executives to say she was leaving the series to pursue other opportunities.

But Gurwitch and the other hosts maintain there remains a place for the host in the world of streaming. Gurwitch said the “Dinner and a Movie” format is still valid and she’d love to host a similar series focused on midlife movies — she has a book looking at the subject, entitled “You’re Leaving When? Adventures in Downward Mobility” coming out next year. She also said that now is a great time for networks and outlets to focus on niche communities.

Peterson pointed out that the struggle now, particularly for horror hosts, is having access to movies to show audiences. “Unless you’re on a network that has a lot of money and access to a lot of films, you can’t get the films yourself.” Peterson often paid out of pocket to license movies for her series, which was one of the first to embrace home video and streaming, and even paying to remaster public domain titles to work with HD streaming is expensive. There’s also the blurred line between hosting and curation, which Briggs says is “frequently the same thing.”

But the host remains a viable entity. In Shudder’s case, every week “The Last Drive-In” airs it takes up at least three of the top trending slots on Twitter, with fans both American and international tuning in together. “We have this enormous audience the moment it comes on,” says Briggs. Unlike network television today, “The Last Drive-In” becomes scheduled television. Changon said it’ll be interesting to see whether streaming services embrace hosts or not as it truly does set so many networks apart. But for Mankiewicz, the host endures as a familiar face in trying times. “Seeing a familiar face tell you a story that makes you feel good, that’s worth a lot more than nothing right now.”