Shortly before shooting started on comedy film The Hustle, actor Anne Hathaway had the core team of cast and crew around to her place for dinner.

It was a small ritual she'd adopted from Australian actor Russell Crowe, who held dinner parties while filming Les Miserable for his so-called "engine room", an effort to make everyone feel less self-conscious while singing into each other's faces on set.

This time, there was no singing to fear but plenty of comedy improv and foreign accents to tackle. And Hathaway wanted to toast one person in particular: her co-star Rebel Wilson, the Australian actor who pitched the film idea, produced it and carried its crucial comedic backbone.

"It’s not an easy thing to get a movie made," Hathaway says. "It’s not an easy thing to back yourself in Hollywood and the reason we were all there … was because Rebel believed in herself, because she saw herself in this project and had the follow-through to make it happen and that’s really, really hard to do. So I was very happy to toast to her and say, 'Thank you.' "

The Hustle is an outsized passion project for Wilson, a law graduate turned high-powered actress who is now breaking out as a Hollywood producer too, something she dabbled in early in her career.

She pitched the film to producer Roger Birnbaum and production company Metro-Goldwyn-Mayer as an updated remake of the 1988 slapstick comedy Dirty Rotten Scoundrels (itself a remake of 1964's Bedtime Story with Marlon Brando), this time with a chalk-and-cheese match of two female con artists on the French Riviera: high-class, millionaire conwoman Josephine Chesterfield (played by Hathaway) and low-rent, backpacking hustler Penny Rust (played by Wilson). Captain Marvel and Black Widow screenwriter Jac Shaeffer wrote the script and occasional Veep director Chris Addison was brought on for his big-screen directorial debut. 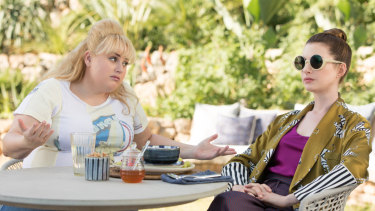 Rebel Wilson stars as Penny Rust and Anne Hathaway as Josephine Chesterfield in The Hustle, a comedy about a pair of mismatched con artists on the French Riviera. The film is a female-skewed remake of Dirty Rotten Scoundrels.Credit:Universal

The gender-swap remake has become something of a mini-trend in Hollywood, drawing both praise and criticism, lauded as an important step in increasing female representation, derided as a tokenistic distraction from making new films written by, and about, women (and by some male commentators in particular as somehow "tarnishing" the memory of the male-led original).

It's also part of a wave of female-led projects flipping the script on traditional female villains, like the BBC series Killing Eve, starring Sandra Oh as an unconventional spy and Jodie Comer as a female assassin who eschews the stereotype of the catsuit-wearing killer luring men with sex.

Hathaway admits she is a ripe target for criticism with this film but believes sceptics of the gender-swap remake have lost sight of the bigger picture.

"The world is being remade into a more equitable place right now," she says. "This is part of a larger movement, representation is so important and this movie is not inclusive of everybody, but I think seeing women do things that traditionally we've been told won't work – that we aren't funny, that you have to look a certain way in order to be a movie star – it's important to see them being shattered.

"This isn't, like, the movie that's going to change it all," she adds. "But hopefully it's a helpful and positive contribution."

Hathaway's character is an intriguing and opulent solitaire who reluctantly lets the bombastic Penny into her heavily guarded life in the seaside town of Beaumont-sur-Mer.

Sitting in New York's gilded St Regis Hotel this week, wearing leather trousers, a lace top and a lick of red lipstick, Hathaway seems to embody the bewitching Josephine. She sits at a ridiculously large dining table as an assistant brings her a gold-leaf teapot full of hot water with lemon and fresh mint.

But as she talks with infectious energy, and an occasional cackling laugh, it's obvious she possesses a warmth that is the antithesis to her character's frostiness.

To get into the role, she created a back story for Josephine and drew on her own experience of grappling with public and private lives.

"When I was first starting out I got some very well-meaning but slightly dodgy advice that the way to survive fame was by having a public persona and then having a private persona," she says.

For many years, the public Anne Hathaway, who catapulted to fame in 2001 with Disney's The Princess Diaries, dressed differently, talked differently and barely resembled the private Anne Hathaway. Eventually, Hathaway wasn't sure who she really was.

"I just found it to be really confusing and that didn't pan out well for me," she adds. "Now I know who I am better and so I feel much more comfortable just kinda being myself. And then there are just certain things about my life that are private. That seems more doable."

She wears many hats comfortably now: wife to businessman and actor Adam Shulman, mother to three-year-old Jonathan, one of the highest-grossing actors of the 21st century, philanthropist and humanitarian activist, and confessed "good girl" (whose goody-two-shoes zeal once, bizarrely, spawned a movement of haters).

To play Penny Rust, Wilson didn't need to dig much further than her long-held admiration of Hathaway. 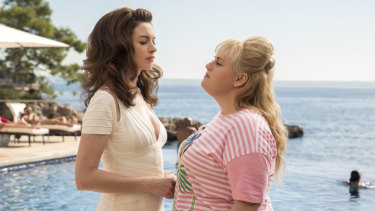 They may have the same aim – to separate gullible men from their loot – but their methods are quite different.Credit:Universal

"Josephine is like 40 times richer than Penny when we meet her," says Wilson. "And Penny's like, 'How can I be her?' Which I really related to because I remember when I first met Anne Hathaway I was like, 'Oh, how could I be like that? How can I be so glamorous and so talented and such a good actress?'"

The adoration was mutual. Hathaway says she was a huge fan of Wilson before meeting her and she gushes about the Australian's flair for physical comedy and improv.

The film's co-producer, Roger Birnbaum, whose credits include Rush Hour and The Tourist, calls Wilson "genuinely hysterical" and "a bright woman who's not just funny".

"Penny's a perfect part for her," he says. "She's funny and kind of chaotic. She's the outsider."

Director Addison says the pair had a yin-and-yang synergy; Hathaway's elegant wit, Wilson's in-your-face comedy. "There was a point early on where [screenwriter] Jac and I were behind the monitors clutching each other laughing," he says.

Hathaway reckons she laughed so much on set that she "corpsed" – laughed uncontrollably in the middle of a take – at least once a day. At night, after shooting scenes in Majorca, she and Wilson would share tapas and wine, and laugh some more.

"It was just easy," she says. "I wanted her to succeed, she wanted me to succeed, we wanted the film to succeed."

It might not be the film to change the world but it's one Hathaway is happy to toast.

The Hustle is in cinemas on May 9.