Bradley Walsh returned to The Chase this evening with Chaser, Jenny Ryan as a host of hopeful quizzers tried their hardest to beat The Vixen in a bid to win the jackpot prize. However the host struggled to control himself when a humorous questioned popped up.

The first contestant to take on the Chaser was Andy who added £5,000 to the jackpot and secured his place in the final Chase.

Jackie followed suit and again brought back £5,000 to the team after beating Jenny.

Next to face Jenny was Matt who also earned the same amount as his predecessors in the cash builder round. 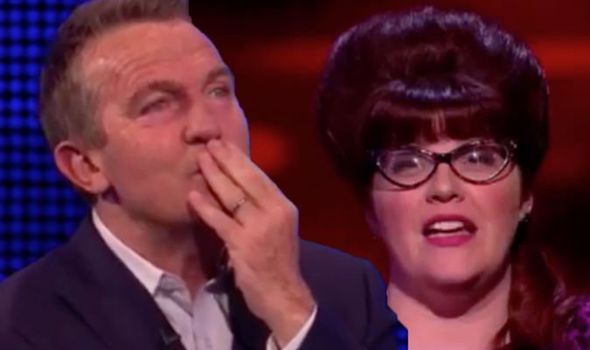 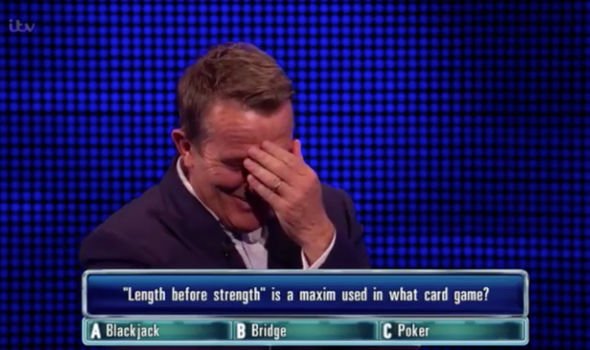 During his head-to-head, Bradley asked a cheeky question which led to the host breaking down in fits of laughter.

He asked: “‘Length before strength’ is a maxim used in what card game?”

The options were blackjack, bridge and poker but Bradley was barely to finish reading out the possible answers. 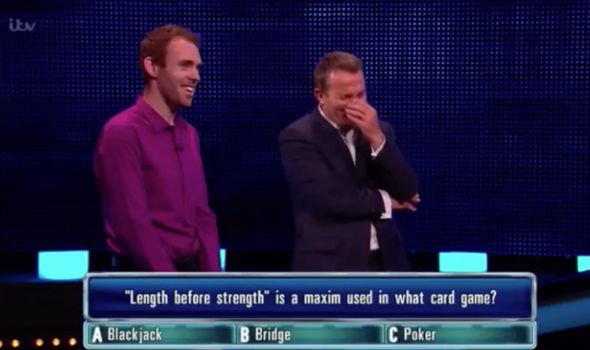 However Bradley was already in fits of giggles and could be seen with tears in his eyes as Jenny added: “Too late, he’s started.”

Viewers were quick to comment on The Chase host’s outburst.

One viewer tweeted: “Our Bradders is so mature #TheChase.”

“After the length/strength question I’m shocked that [Bradley] didn’t end up on the floor in convulsions #TheChase,” a third wrote.

Unfortunately Matt was caught by the Chaser and Vivien suffered the same fate.

Earlier in the week, Bradley hit out at a contestant when they complained about the difficulty of the questions.

In Adam’s head-to-head with Shaun Wallace, the pair were asked: “The autumn term at Oxford and Cambridge universities is named after what Christian festival?”

Adam explained he wasn’t sure on the answer before complaining: “Had some tough questions, I think.”

“You’re having a laugh, pull your socks up lad,” Bradley hit back.

“‘I’ve had some tough questions’ crumble, in my sleep,” the host light-heartedly mocked.

The Chase airs weekdays at 5pm on ITV