[Editor’s Note: The following article contains spoilers for “The Dark Crystal: Age of Resistance” Episodes 6 and 8.]

On a crazy show like “The Dark Crystal: Age of Resistance” where the ruling Skeksis are literally draining the life force of their Gelfling constituents, one of the most shocking moments isn’t violent at all, but involves a head-to-toe makeover. With a struggle for the Gelfling crown at stake, Princess Seladon shows up in the throne room wearing a costume that makes her look like a mini Skeksis. She’s both menacing and magnificent, but most importantly, she makes her political stance abundantly clear; she sides with the Skeksis.

Seladon, the eldest daughter of the All-Maudra Gelfling leader, was first mentioned in the “Dark Crystal” novels by J.M Lee, and was only going to have a small appearance in the first episode of the Netflix series. But director and executive producer Louis Leterrier felt that was a missed opportunity for some meaty storytelling. And indeed, how a Gelfling with this mindset exists and how she comes to make such a bold political statement, is one of the more intriguing storylines in the series.

“Louis came in and was like, ‘Now wait a minute. There’s three sisters here, there’s a story here. What’s going on with these three sisters? Anytime you see three in Thra you’ve got to pay attention,’” said co-creator Will Matthews, making a connection to the three suns that shine over “The Dark Crystal” planet of Thra.

The writers’ room decided to differentiate the three daughters: youngest daughter Brea would be the inquisitive rebel, middle daughter Tavra would be the warrior, and Seladon would be the responsible one groomed to succeed her mother. Because of this, she’s often saddled with onerous tasks and isolated so she can learn self-reliance. 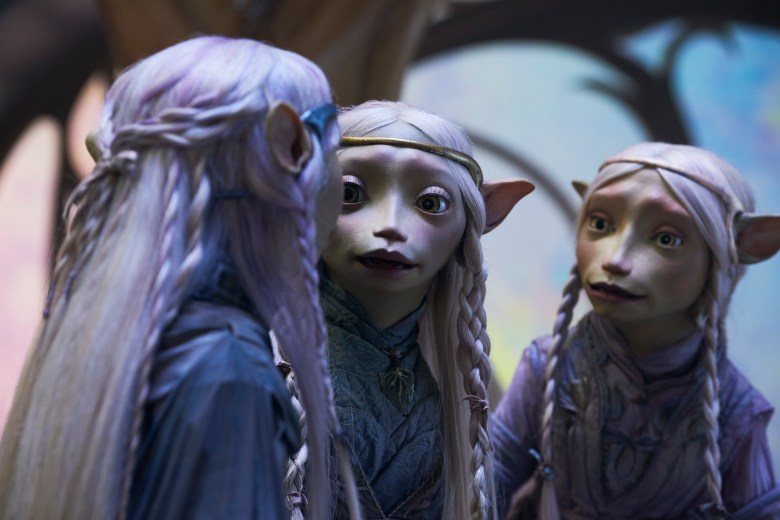 “The Dark Crystal: Age of Resistance”

“Seladon is what, on paper, seems to be the perfect child. She’s the golden child, she’s the firstborn, she’s the most invested in her mother’s world view. She is the best at following the rules,” said Matthews. “She’s not just this difficult, mean, snooty know-it-all. She is a person who is trying to do her best who is trying to get her mother’s affection. That’s all she wants, and she doesn’t get it.”

When Seladon is faced with proof that the Skeksis are indeed draining the Gelfling to prolong their own lifespans, she refuses to believe it. Even when her own mother is killed by the Skeksis, Seladon chooses to believe that the All-Maudra was rightfully executed for betrayal. In fact, after these world-shaking events, Seladon doubles down in her belief that the Skeksis still are and always have been benevolent overlords, and anyone who disagrees is a traitor. It’s baffling, it’s infuriating, and yet it’s not unrealistic.

“There’s something about about extreme trauma that I think causes people to take directions in life that are unexpected,” said co-executive producer Javier Grillo-Marxuach. “Seladon was a loyalist to that system, and Seladon believed that that system would give her everything that she deserved and that she worked for. And for her to see her mom as a traitor is a deep blow to her personally. But it only reinforces what she thinks of the system… This was her religion.”

The reputations of the Skeksis loom large because they’re not of Thra. “When you think about why the Gelfling submit to that rule, I think it’s because the Skeksis, as comical as they can be, they are a formidable force and they are god-like beings in this world, especially when you consider how the urSkeks first came to Thra and how they split to become the Skeksis and the Mystics,” said Grillo-Marxuach.

“‘The Age of Resistance’ is really about a rupture that’s extraordinarily deep and it cuts to the core of of these characters’ belief system. That’s why it’s so hard for Gelfling unity to come too, that’s why it takes so much effort. They’re not just fighting corrupt government; they’re fighting gods.”

In the wake of her mother’s death, Seladon assumes that she will inherit the All-Maudra’s crown, but not every clan supports this. In fact, Maudra Fara of the Stonewood clan challenges Seladon to a flying trial by air. But Seladon bypasses the challenge and arrives in her Skeksis finery, demanding instant fealty or else. This switch from a battle for supremacy to Seladon simply demanding was born from necessity. Although the series initially planned on showing the test of flight, the time and expense to pull that scene off was too dear.

Co-creator Jeffrey Addiss said, “We decided we’d just keep [the confrontation] in the room. But how do we made that dramatic? A [Netflix executive] was like, ‘OK, I got an idea. It’s crazy, but I want to pitch you. What if she just comes in, in this dress?’ That’s it! That’s amazing!”

Leterrier built to the big reveal with an extended scene where Seladon suits up like a superhero. The camera zooms in to show every little accent and touch, from donning the crenellated crown to the almost sensual application of wine-dark lipstick. The presentation couldn’t have been more dramatic when she finally arrives in the throne room.

Creature and costume designer Brian Froud worked on the original film and is responsible for the visual language of the franchise, from its strange machinery to its imaginative flora and fauna. He found the storytelling aspects of Seladon’s transformation into a Skeksis cosplayer particularly challenging. 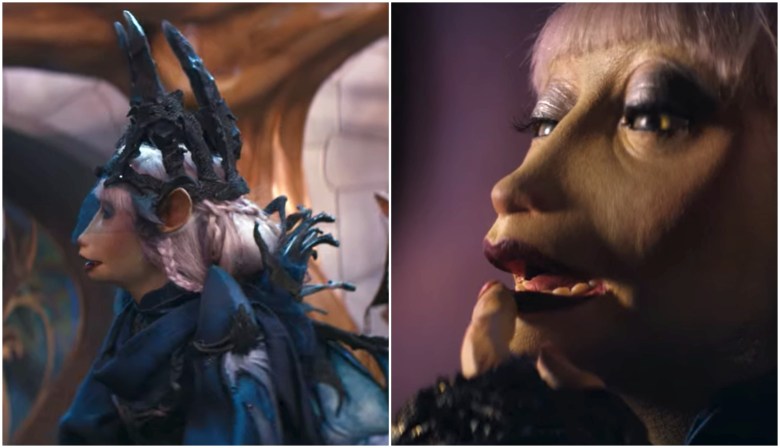 “We were always looking to see what we could do that would have a very emotive quality to it. There are shapes or forms we felt that a Gelfling would have thought about, what she sees in a Skeksis that gives them their weight and their power,” said Froud. “There is that sort of strange carapace that projects from them on the back, so we knew we had to recreate that. We had to create a crown that was also sinister. We also put a veil on her to indicate that she’s retreating away from the world and she’s actually gone to the dark side, literally.”

“We also wanted to feel that she hasn’t just gone to the shop to get a Skeksis dress, but somehow she would have to put it all together herself with things she has found,” he added. “In many ways, it’s a shocking image, but when you see her she looks quite wonderful, quite magnificent.”

Senior costume & creature supervisor Toby Froud, Brian’s son, addressed the importance of Seladon’s makeup, from its initial sinister perfection to its sad and smeared dishevelment after the Skeksis turn on her.

“Because they’re Gelflings, they have that feeling of natural makeup in their own clan. But to transform herself and become more than any other of the Gelfling and become more Skeksis, it was an idea of makeup, putting a mask on, being something else,” said Toby Froud. “It reflects us in life. We do that, we put on makeup, we put on things as armor to defend ourselves, and to make ourselves grander or bigger than something else than we truly are.

“Showing the smeared makeup, it’s that simple idea when you’re torn down, when you’re pulled back by something, it is smudged. She has cuts on her, she has been torn apart. You have to have that. It’s a simple visual idea that you can relate to as a viewer. ‘I know that feeling. I may have experienced something like that in my life when my makeup runs.’ It’s a visual journey, even down to the makeup.” 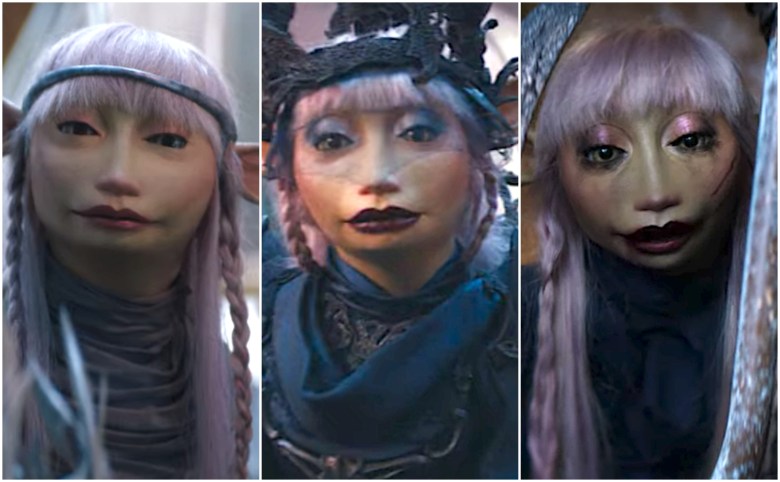 Much like how the Skeksis underestimate the Gelfling, so too is Seladon an underdog who proves herself. She wasn’t supposed to be important, and this scene was a backup plan for a much bigger spectacle. And yet, both combined to be one of the most powerful and intriguing moments on the show.

“Ultimately the dress did the work better and her menacingly putting on lipstick is better than something that would’ve cost a thousand times more, taken a lot more time, and ultimately didn’t last,” said Addiss. “It’s also heartbreaking when she goes in front of the Skeksis in this dress that she’s so proud of. It was the best way to tell the story.”

“The Dark Crystal: Age of Resistance” is currently streaming on Netflix.