Danny DeVito, 74, was one of the guests featuring on last night’s edition of The Jonathan Ross show, speaking with the host about his starring role in the live-action adaption of Disney’s Dumbo.

The actor was joined by his co-star Colin Farrell, 42, on the ITV chat show but while discussing their new film, attention turned to Danny’s mobile.

It was revealed the actor had brought his phone onto the set and it kept interrupting Jonathan’s, 58, chat with the stars of the movie.

As the discussion progressed, Danny filled the chat with accidental innuendo’s, which led Jonathan to remind the actor he was talking about a family film.

Danny was talking about director of the live-action adaption of Dumbo Tim Burton, 60, at the time his phone first went off, which interrupted the actor’s flow.

“Tim Burton is a really sensitive artist. Brings it into the 21st century in an incredible way,” Danny went on to explain, but his phone could be heard pinging in the background.

“I just got a text,” Danny remarked as he stopped his discussion of the film, to which Jonathan added: “That was Tim Burton saying don’t give too much away about the movie. [You’ll ruin everything].”

With the studio erupting into laughter, Jonathan asked the actor: “Danny, can I check, have you got a phone or when you get a text, does your leg just ping?” as every time the phone sounded, Danny’s leg would pop up in the air.

Explaining why his leg motioned in such a way, Danny pulled the mobile device from his sock, telling the host: “I carry my phone in my sock.”

Colin went on to add Danny always has his phone on set, to which Danny said: “I do a lot of photographing Well, it’s a good memory to have.” 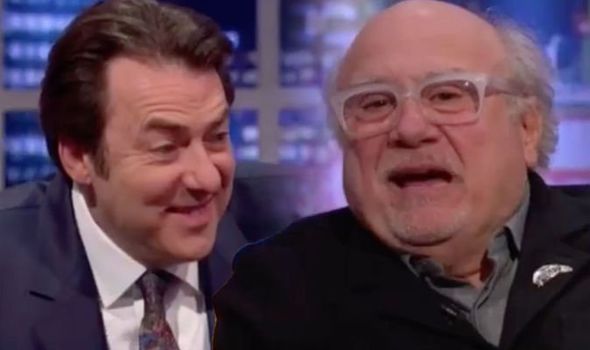 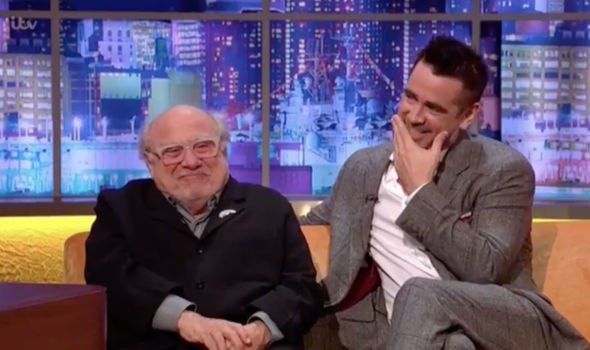 The actor then told the audience he had turned the sound off, meaning the device would vibrate if he got another message: “It’s going back in the sock, I turned it off.”

“By the way, it’s vibrating right now, I’m getting another text. I’m probably keeping it in the wrong place,” the actor remarked, leading Colin, Jonathan and the studio audience to burst into hysterics.

Jokingly reprimanding the actor, Jonathan told Danny: “We’re talking about a disney movie,” as he tried to compose himself.

Turning attention back to the film, Jonathan asked the actors about the CGI and working with an elephant which wasn’t there, with props used for which the animators would turn into the young creature in the later edit’s. 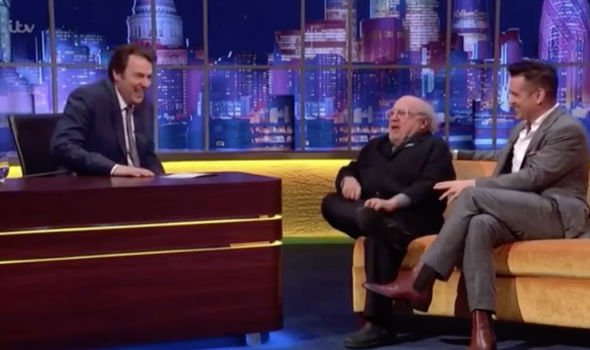 Danny remarked: “I’m playing with a snake!!” making another accidental innuendo, before he discussed the themes of the movie, which sees the elephant performing in a circus.

The actor said: “We don’t want animals in cages, we don’t want people in cages…” before Jonathan jumped in to add: “Danny, stop taking it to dark places, it’s a Disney movie!”

On last week’s edition of the show, Jonathan was joined by comedian Jack Whitehall, 30, following his second stint at presenting the Brit Awards last month.

However, discussion turned to the Christmas party Jack performed at for members of the Royal family, including Charles, The Prince of Wales, 70.

Jack told the host the Prince seemingly took a swipe at him after his performance as His Royal Highness didn’t seem too impressed by the comical routine.

The Jonathan Ross Show continues Saturday at 9.45pm on ITV.