Season 2 of The Mandalorian has had no shortage of guest stars, with Katee Sackhoff officially joining the ranks as Bo-Katan Kryze in episode three, “Chapter 11: The Heiress,” on the live-action Disney+ series starring Pedro Pascal. What makes the former Battlestar Galactica star’s appearance more notable than the rest, which has included Timothy Olyphant, Titus Welliver and the return of Amy Sedaris among others, is that she’s reprising a role that she originally voiced on Star Wars: The Clone Wars.

“It’s pretty surreal to be honest,” Sackhoff tells ET’s Ash Crossan. “This character has been a part of my life for so long and it is incredibly special and rare to be able to play her in live action. So, there’s a lot of nerves that come along with that.”

A lifelong fan of sci-fi and the Star Wars franchise, the actress would have done anything to be part of this universe. “So, when Bo-Katan came around, it was just an opportunity to exist in the world and to really just live out a childhood imagination and fantasy,” Sackhoff says. “And over the years, she’s become very important to not only to myself because I’ve played her for so long and I’ve really seen her grow up as a character and she just means a lot to me, she’s also been the character I’ve played the longest.”

The actress has been voicing the human leader of the Nite Owls and a lieutenant in Death Watch since she first appeared in season 4 of The Clone Wars. She continued to voice the role for the remaining seasons of the series while also briefly appearing on the other animated series Star Wars Rebels. By appearing on The Mandalorian, Bo-Katan makes her third official appearance on a Star Wars series and marks another connection between the animated series and the live-action one.

“Playing her in Clone Wars and Rebels was a dream come true,” Sackhoff says, remembering how she found out that she’d continue to play the character first created by executive producer Dave Filoni. When she first learned of creator Jon Favreau’s series, the actress thought there might be a slim possibility there might be some overlap. “So, I sort of mentioned it to Dave Filoni when I saw him at one point and he’s like, ‘Well, you never know,’ in his cheeky little way that he does. And then when I got a phone call to sit down with Jon Favreau, I think my brain exploded.”

Sackhoff continues by explaining that the whole situation was pretty surreal. “He was like, ‘Do you want this?’ I didn’t even know how to answer the question. Of course I want to do it! I was a huge fan of the show and this was pretty amazing.”

While rumors quickly spread earlier in the year that she had been cast to reprise the role in season 2, no one would confirm the news that Sackhoff had officially joined The Mandalorian. No one outside the show officially knew until the episode directed by Bryce Dallas Howard premiered on Friday, Nov. 13. “It’s been the hardest secret of my life. I have to tell you that. It’s been really hard,” the actress reveals. “I think that it’s been even harder for my father who is such a massive fan and loves his Facebook.”

While the actress says they had fun in the makeup chair, figuring out what worked the best, it was the hair that proved to be the most challenging detail to get right. “One of the hardest things for us to find was the hair color because if you think of Bo-Katan, animated Bo-Katan, it’s more orange,” she says. “Like, it wasn’t the right color and we couldn’t dye my hair because of [the Netflix series] Another Life. I was going straight into filming that, so we couldn’t change my hair color. And so, it was really trying to find the right color wig, which was harder than I thought it would be.” 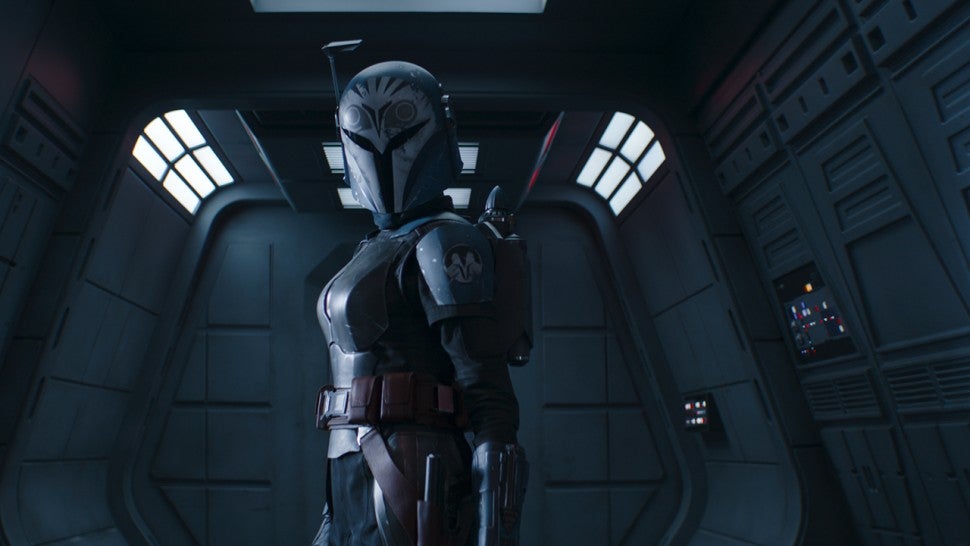 And because Sackhoff has been portraying this character from inside a recording booth for so long, she had to figure out a few things, like how does she move? What does her face look like when she speaks in a certain way? “It took me a little bit to find her and to really settle into who she was and make sure that she wasn’t a character of herself,” she says.

In the end, Sackhoff was able to bring Bo-Katan to life and help deliver one of the best episodes yet. In the 33-minute chapter, Bo-Katan and her teammates, Koska Reeves (Mercedes Varnado aka Sasha Banks) and Axe Woves (Simon Kassianides), come to Mando and the Child’s rescue by saving them from a group of Quarren.

Unlike our titular hero, these mandalorians remove their helmets, which goes against the creed he’s long lived by. However, they quickly explain that they come from a mainstream version, which do not abide by the ancient way of Mandalore.

After eventually coming to trust each other, the group makes a deal: Mando will help Bo-Katan’s team seize an Imperial ship for directions to find the Jedi. While the terms of the deal change slightly, as Bo-Katan’s quest for the darksaber is revealed, she still provides Mando the information he needs to find a Jedi called Ahsoka Tano (presumably played by Rosario Dawson).

Others with beskar have arrived. Chapter 11 of #TheMandalorian is now streaming on #DisneyPlus. pic.twitter.com/EKQR6w0YMg

While there are lots of theories about Bo-Katan’s time between the animated series and the live-action one as well as how the darksaber came to be in the possession of Moff Gideon (Giancarlo Esposito), Sackhoff hesitates to indulge any of them, even though she seemingly knows the truth about it all.

“I really wanted to see how Bo-Katan could fit into this world and it took a lot of conversations and a lot of understanding timelines and that meant talking to Dave and John quite a bit,” Sackhoff shares. “The three of us would really powwow and be like, ‘Would she say this? Would she walk like this? What would she do? Because we know this happened, do we sense that in her voice at this moment because that happened eight years ago?’ It’s really pulling from a vast amount of source material because she’s been around for so long.”

The actress won’t even hint as to whether or not she returns for another chapter of The Mandalorian. “You’ll just have to wait and see. As a fan of the show, I hate spoilers,” Sackhoff teases, adding that she doesn’t even know anything about Dawson’s rumored casting. “I honestly don’t know anything about it… I’ve never met Rosario.”

In the meantime, she is open to reprising the role again, whether it’s her own series or another appearance in some other part of the Star Wars universe. “There’s so many different places to go off and find. There’s so many stories and so many interesting characters to go after that I have no idea, but I would love to play this character as long as she has a story.”

The Mandalorian is now streaming on Disney+. New episodes premiere every Friday.