Chances are you’re familiar with “Mean Girls,” the 2004 mega-hit starring Rachel McAdams, Amanda Seyfried, and, of course, Lindsay Lohan. Well, you might not know about the odd rumor circulating the cult film — a theory that makes the whole movie seem a lot darker than writer Tina Fey perhaps intended.

Let’s backtrack: the story follows sweet 16-year-old Cady, as she struggles to fit in and navigate the complexities of high-school drama. Seemingly a pretty straightforward tale about being yourself amid peer pressure, we root for Cady every step of the way as she struggles against bully clique The Plastics and uber meanie Regina George. However, a fan theory outlined by writer Beth Elderkin for tech site io9 suggests Cady might not be so innocent after all. Elderkin argues that the film is a classic case of a doppelgänger fairytale: a story in which an imposter resembling the main character arrives and gradually overtakes their life, all the while causing death and destruction. In this case, Cady’s “sole purpose is to take over Regina George’s life and kill her.” Turns out this isn’t just a regular rumor… It’s a dark rumor!

So, could there be truth to this “Mean Girls” theory? Keep reading to find out! 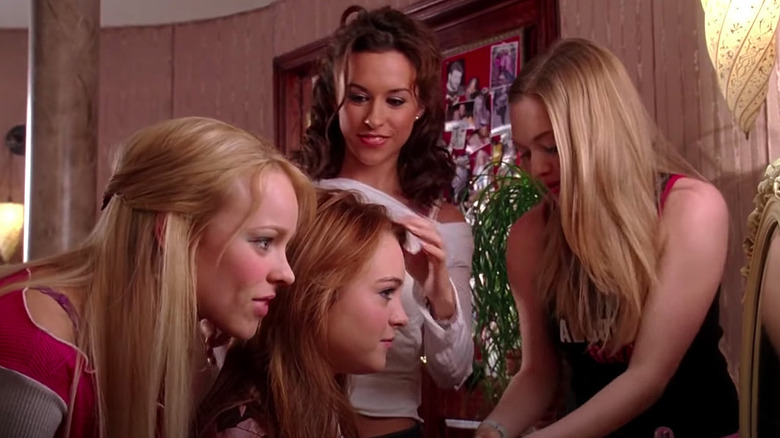 Of course, the internet is filled with wild fan theories, with everything from Ferris Bueller actually being dead the entire time to an extra switcheroo in “Us” making the rounds.

In fairness, some details do lend to the theory, as Beth Elderkin pointed out for i09 — like the fact that seeing your doppelgänger often coincides with tragic events that lead to your ruin, in this case, poor Regina getting hit by that bus! Plus, Cady does morph into a warped version of her enemy — stealing Regina’s look, status, love interest, and eventually taking her place as leader of her friend group, the article explained.

But, unless Fey is really into creepy German folklore, it seems more likely a case of the internet wanting to make something happen, when it’s just not going to happen. That being said, there is one little spooky detail Elderkin pointed out that might give you some pause: in Irish mythology, doppelgängers are known as “fetch,” which also happens to be the slang Gretchen Wieners failed to make cool. Stranger things have happened, as the saying goes.