PARK CITY, Utah — Every year, the Sundance Film Festival arrives with the usual hype, unreasonable expectations and the audience’s ravenous appetite for the new. And each year, despite the reliably tough odds (movies are hard to get made) and the industry’s perpetual existential dread (things are always bad unless they’re awful), Sundance comes through. It showcases good and sometimes great movies that affirm that there is more to contemporary American cinema than bland, branded product, a truism that will carry greater, deeper significance when these titles enter the larger, Disney-dominated world.

For movie lovers exhausted by the circus called awards season the arrival in January of the new and unseen is especially welcome. That’s the case even when there’s no consensus favorite like “Beasts of the Southern Wild” (2012) to ignite Sundance. More common are the years defined by low-key discoveries, the ones that seem unlikely to hit the cinema jackpot — the critics, box office and zeitgeist — as powerfully as Jordan Peele’s 2017 freakout, “Get Out,” did. 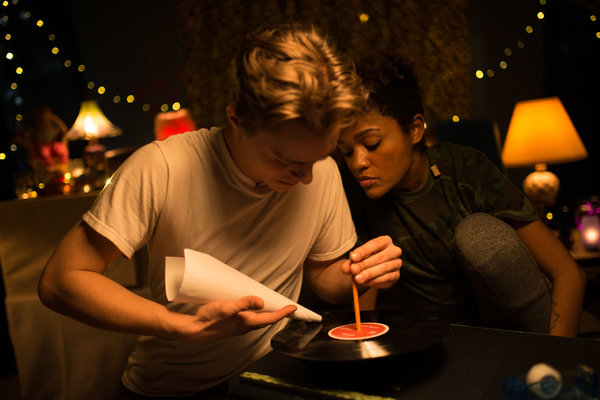 This year’s best shot at mainstream success is “Late Night,” a smart comedy about a talk-show host, Katherine (Emma Thompson, superb) who receives a much-needed jolt from an unlikely new writer, Molly (Mindy Kaling, who wrote the script). The director Nisha Ganatra doesn’t do much visually but she adroitly works around Kaling’s stand-and-deliver acting and gives Thompson the room she needs to turn a cliché into a striking character.

The movie shrewdly leads with comedy — it has belly laughs and zingers — even as it skitters over, and at times dives into, questions of diversity and sexism in entertainment industry, including from other women. Katherine, a transformational figure because she’s the only female late-night host, decides she needs to shake things up by bringing a woman onto her all-male writing staff. Once upon a time, she bashed through a glass ceiling without offering a hand up to other women, a story with real-world sting. Katherine isn’t interested in diversity: She hires a woman for selfish reasons. And Molly delivers because she’s talented — she just needed to get in the room.

As is often the case, some of the best movies I saw at the festival arrived quietly, without celebrities and clamor, and are unlikely to rack up the sales that generate splashy news. Amazon went on a shopping spree here, buying a number of titles, including “Late Night” and “The Report,” from Scott Z. Burns, who’s better known for his scripts (“The Bourne Ultimatum”). Eminently watchable and rather too self-satisfied, “The Report” centers on a Senate staffer (a fine Adam Driver) who is tasked by his boss, Dianne Feinstein (a bone-dry, finely calibrated Annette Bening), with investigating the C.I.A.’s interrogation methods in the wake of Sept. 11.

The presence of another great actress, Alfre Woodard, a Sundance veteran onscreen and off (she was on a 1985 jury), was enough to send me to “Clemency,” the second feature from the writer-director Chinonye Chukwu and a standout in the dramatic competition. Woodard plays Bernadine Williams, a coolly efficient warden who’s overseen some dozen executions. As she prepares for the death of another inmate — played by an outstanding Aldis Hodge — Bernadine begins disappearing into her own profound isolation. With visual austerity and not an ounce of sentimentality, Chukwu transforms a character study into an indictment of institutionalized murder, the horror of which is made harrowingly palpable as Bernadine’s face becomes a rictus of pain.

The other dramatic competition high point was the plaintive, gorgeous and finally exultant “The Last Black Man in San Francisco,” the first feature directed by Joe Talbot. It centers on a young, romantically despondent skateboarder, Jimmie Fails (actor and character share the name), who can’t let go of the glorious Victorian house that his family lost years earlier. When the house’s current owners conveniently exit, Jimmie and his sole friend, Montgomery (Jonathan Majors), take possession in a story that doesn’t announce its themes but instead transforms lived-in ideas about friendship, loneliness, artmaking, gentrification and the many faces of black masculinity.

The most heart-skippingly passages in “The Last Black Man in San Francisco” don’t so much drive the story as slow things down, enriching it. In an early scene, Jimmie skateboards out of his neighborhood — the faithful Mont hops on the board behind him — into a city that becomes progressively white and visually static (they breeze by in a different time signature). Other people often seem a mystery to Jimmie, who’s estranged from his parents and much of the world. But they’re fodder for Mont, who carries around a red sketchbook filled with portraits and scribbles, and who eventually transforms a world of loss into touchingly reflexive art.

Directed by Kirill Mikhanovsky, who shares script credit with Alice Austen, “Give Me Liberty” at times brings to mind the work of Aleksei German, a Russian master of controlled chaos. It follows a young Russian-American, Vic (Chris Galust), who over the course of a hilarious, poignant and very wild day and night in Milwaukee, ferries disabled passengers to and from their appointments while he tries to deliver a boisterous gaggle of elderly mourners to a funeral. As he careens from one destination to the next, Vic begins a beautifully nuanced relationship with one of his passengers, Tracy (Lauren Spencer), a young woman with A.L.S. who uses a wheelchair.

Completely, delightfully unpredictable from scene to scene, “Give Me Liberty” draws you in with its moving performances and blasts of broad comedy — much provided by a visitor played by Maksim Stoyanov — that are delivered with whiplash camerawork, abrupt cuts and sudden tone shifts. Its matter-of-fact approach to disability, including in some deeply moving exchanges between Vic and a profoundly disabled older man, is a tonic. Diversity is a mantra at Sundance, which has long been publicly committed to inclusion, but disabled people haven’t always been part of that mix.

Over the years, the diversity has deepened, become more layered, partly because, I imagine, ambitious filmmakers of increasingly different backgrounds know that Sundance will be receptive to them. The festival still programs familiar coming-of-age stories about teenagers who learn something important; this year’s crop included male-driven tales like “Adam” and “Big Time Adolescence” as well as Minhal Baig’s “Hala,” about a young Muslim girl whose identity struggles evoke “Pariah,” Dee Rees’s 2011 Sundance dazzler. Palatable, easy-to-watch movies have always been part of the Sundance mix; if only its programmers would embrace aesthetic and narrative diversity more fully.

In time, moviegoers will be able to see some of the festival’s best titles, including Joanna Hogg’s elegantly fractured drama “The Souvenir,” about a young film student and her older lover. Invariably, some attendees will insist that this year was another disappointment, though it’s worth remembering that the 2018 edition — which included “Leave No Trace,” “Sorry to Bother You” and “Three Identical Strangers” — was similarly pegged before the festival ended. By the time the 2020 edition arrives, some of this year’s finest movies — including must-see documentaries like “American Factory,” “The Brink,” “One Child Nation,” “Knock Down the House” and “Hail Satan?” — will have come and gone. And Sundance will be reliably ready to disappoint and delight all over again.