Amazon Prime will be airing The Walking Dead: World Beyond on Friday, October 2 for British viewers. AMC will be broadcasting the show in America from Sunday, October 4 for those Stateside. The show will be filling the gap where The Walking Dead season 11 was supposed to be airing before the coronavirus pandemic scuppered these plans and led

How does World Beyond fit into Walking Dead universe?

World Beyond will be set a decade after the end of The Walking Dead when there will be a new world order.

The show will be markedly different from the other two dramas in The Walking Dead mainly because they take place in a period considered more stable.

But World Beyond will look past this and at a point when humans are living in relative peace in their various communities and compounds. 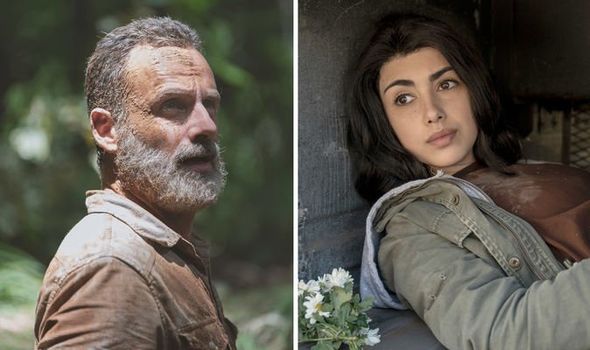 While Walkers still roam the lands, humans are now better equipped to deal with them and some form of society has been created.

There are alliances between different communities – something which viewers can already see forming in The Walking Dead as the show nears its end.

However, World Beyond is going to see more harmony than what’s depicted in The Walking Dead as the human race rebuilds itself.

Each of The Walking Dead series takes place in a different part on America and World Beyond is set in Nebraska.

The show starts off at the old Nebraska University Campus and follows members of a community living there, which has formed an alliance with the Civic Republic.

In The Walking Dead comics, things end with people living harmoniously with the threat of Walkers now brought down with many beloved characters making it happily to old age.

This sadly means characters from The Walking Dead are highly unlikely to be appearing in World Beyond, including fan-favourite Rick Grime (played by Andrew Lincoln).

The Walking Dead’s Chief Content Officer Scott Gimple has already said World Beyond will be “completely different” to the other two series in the franchise.

Nonetheless, Gimple stressed the shows would “complement” each other despite their differences.

While it will exist in the same universe, audiences should brace themselves for something different to what they have seen before.

Tonally, World Beyond will be different and focus on a teenage story and almost a rite of passage as a group of adolescents venture out into the lands beyond their safe compound.

They will be irrevocably changed by their experiences as they face dangers they could never have imagined and are placed in extreme situations.

The Walking Dead: World Beyond starts on Amazon Prime Video on October 2