The difference between the first season of “The White Lotus” and its Sicily-set second installment is, in essence, the difference between the summer and the fall. Where Mike White’s initial introduction of his fictionalized luxury hotel chain sneaks up on viewers like a biting sea breeze on a sunny day, the writer-director’s sequel wears its pitch-black satire like a slowly shrinking sweater. Each tugged thread connects to the white privilege so shrewdly taken to task back in Hawaii, yet it wisely unravels in new directions — sometimes a bit slowly, leaving baggy parts here and there, but still tying together sly critiques of sex and power, as they relate to men and women of means.

Season 2 is acutely invested in relationships: husbands and wives, in particular, but also young love and old friendships; inherited attitudes toward the opposite sex and the oft-awkward attempts to set new standards. With a game cast bringing these complex dynamics to life and magnificent vistas of Palermo elevating their personal odysseys, “The White Lotus” Season 2 comes across as a darker, more personal story, one that’s sure to elicit uncomfortable conversations at home, so long as couples aren’t scared off by colder weather.

Not literally, of course. The White Lotus resort located at the tip of the boot is stocked with beach chairs, private pools, and plenty of bikini-clad bodies baking in the sweltering sun. Just like its American sister site, employees greet guests with choreographed waves and forced smiles when they dock and de-boat — only the Paloma manager isn’t feigning kindness. Unlike the grin-and-bear-it Armond (Emmy winner Murray Bartlett), Valentina (Sabrina Impacciatore) doesn’t hide her opinions from anyone. She’ll call an elderly gentleman “old” to his face, or mock a guest hoping to find his lost luggage by asking if he believes in miracles. In addition to her differing demeanor, Valentina isn’t as prominent as Armond either — not at first, anyway — but this, too, feels like a conscious, well-considered choice by White to help distinguish Season 2 from its predecessor. What you’re about to watch isn’t what you saw before, and Valentina sets the tone with aplomb. 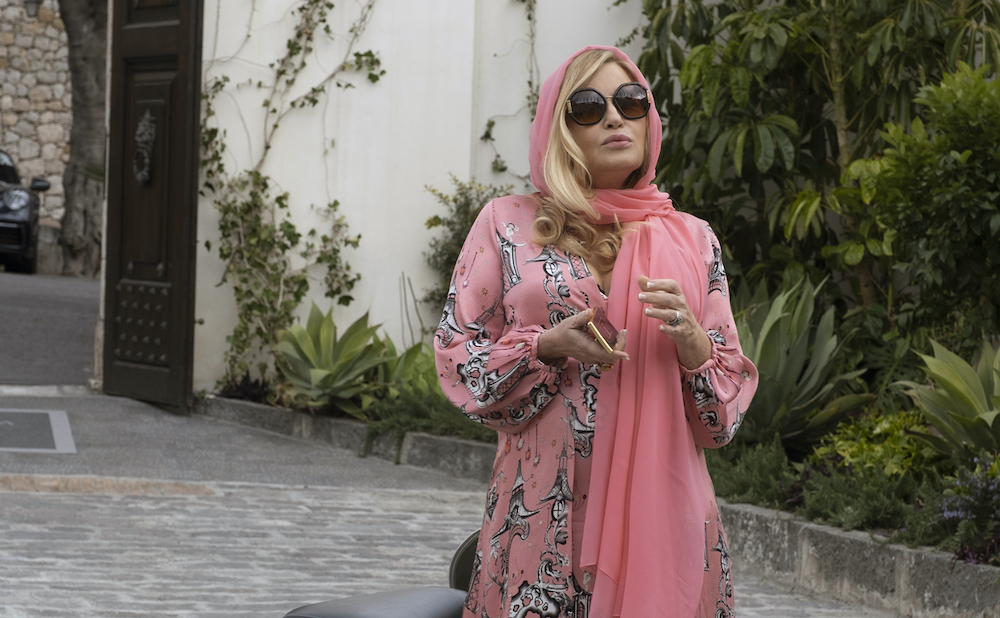 Jennifer Coolidge in “The White Lotus”

Even the lone returning character — Emmy winner Jennifer Coolidge as the lovelorn half-billionaire Tanya McQuoid — isn’t about to repeat herself. On vacation with her now-husband Greg (Jon Gries), Tanya arrives with her new assistant, Portia (Haley Lu Richardson); he’s soured on his wife since their Hawaiian romance, and she’s about as put-upon and perplexed as anyone forced to bend to Tanya’s every volatile whim. So once more, Tanya feels alone, worried, and abandoned. But rather than looking for love in all the wrong places, she’s buoyed by a purely platonic local (Tom Hollander) and, until then, kept steady by her young aide. Through five of the seven episodes, the employer and employee rapport is ripe for comedy, yet goes too often overlooked. While it would be too easy to use Portia as a sub for Season 1’s Belinda (Natasha Rothwell) — another person Tanya relies on for emotional support and baits along with gobs of cash — there’s more jokes to be mined between Richardson and Coolidge than “The White Lotus” makes time for, even if their solo arcs work just fine on their own.

Joining them at the resort is a formidable (and frisky) trio of Italian Americans. Bert Di Grasso (F. Murray Abraham) is a recent widower hoping to visit the small town where his mother was born, along with his adult son, Dominic (Michael Imperioli), and college grad grandson, Albie (Adam DiMarco). But as Bert quickly points out, this “boys’ trip” wasn’t meant as such. Dominic’s 25-year-marriage is all but over after his unspecified infidelity was recently discovered. Still, as a stubborn man of money unaccustomed to things not going his way, Dominic alternates between feigning normalcy, courting his son’s favor (in the hopes Albie will put in a good word with his mother), and drowning his sorrows — not always alone. Despite a father who’s set a less-than-sparking example and a grandpa who hits on every woman he sees, Albie is a “nice guy.” He’s kind, considerate, and supportive. He recognizes the privilege his family’s funds afford, and — when he meets the comparably tiny and penniless Portia — he’s aware of the power inherent to his position as a strapping young man with a respected papa. (Dominic, who’s paying for the whole trip, is an affluent “Hollywood type.”)

Albie and Portia’s delicate attempts to navigate a holiday fling offer ample cringe comedy, though their conversations are nothing compared to Season 2’s crown jewel quartet, led by Aubrey Plaza’s Harper. On a celebratory getaway with her husband, Ethan (Will Sharpe) — who just sold his company for untold millions — the couple sees themselves as modern citizens of the world and their relationship as not only sound, but superior. They know each other’s personal penchants, share a desire to help others with their good fortune, and they always, always tell each other the truth. All that stands between them and a blissful week away are Cameron (Theo James) and Daphne (Meghann Fahy). Ethan and Cameron were college roommates, and they’ve stayed close despite the latter’s bro-y, high-end life in finance. Now that Ethan has made his own fat stack, the two can spend even more time together… much to Harper’s chagrin. 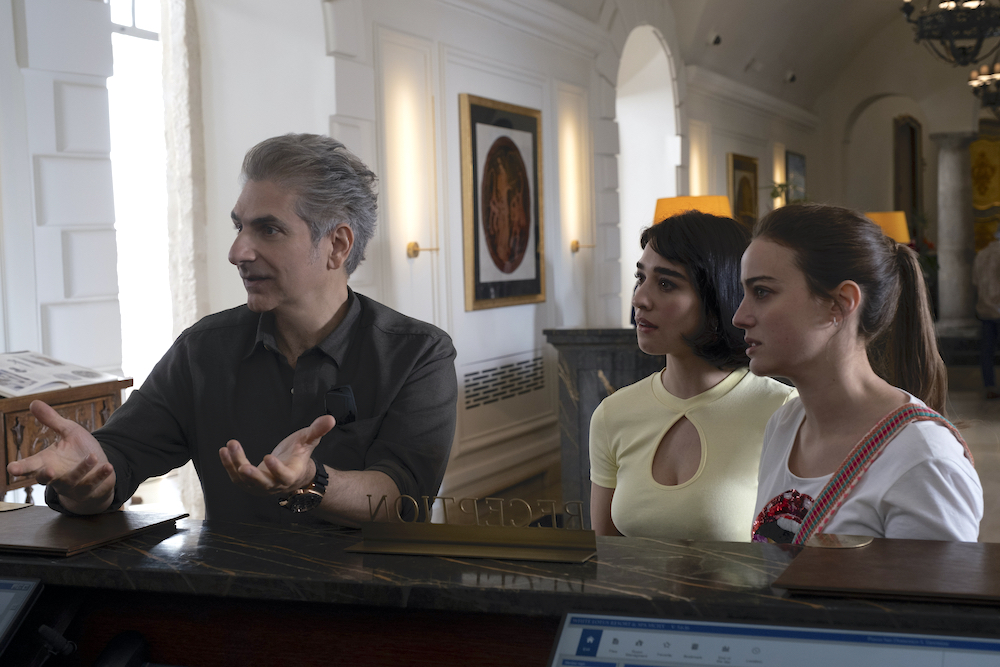 There are similarities between Harper and Season 1’s Rachel, the newlywed played by Alexandra Daddario, but Plaza’s character proves distinct. Both are initially naive to the ways wealth can disrupt people’s lives, and thus, their relationships, and both experience a rude awakening as a result. But Harper, like the show she leads, sees the big picture in minute details. While Ethan considers his friend nothing more than a harmless airhead — Cameron doesn’t read the news and, in one of James’ best lines, dismisses the act of voting with an uber-smug “doesn’t matter” — Harper fears she’s looking into her future. Right now, she can barely stand chipper chats about nothing with Cameron and his seemingly ditzy wife. (Fahy is excellent.) But as their vapid trip keeps throwing her substantial curveballs, a nagging anxiety only grows: Is this what money does to people? Check that: Is this what money does to men?

If there was a simple thesis to “The White Lotus” Season 2, it would come courtesy of an aspiring singer named Mia (Beatrice Grannò), as she sits near the dock with her friend, Lucia (Simona Tabasco). Lucia, a sex worker, has been hired by one of the White Lotus patrons, and as they try to spot her client among the incoming guests, Mia wants to rule out anyone with a wife. Lucia quickly checks her: “Wouldn’t be the first time,” she says, to which Mia drops her jaw and recites the show’s central tenet: “Men are so disappointing.”

Using Sicily’s history as a backdrop, Season 2 examines the culturally dominant machismo that drives (cisgender, heterosexual) men to do, well, everything. Competition fuels certain successes, but it can also destroy their emotional states. Attraction may lead them to the woman of their dreams, but it can also tempt them to cheat. White’s deft scripts don’t so much cast blame as they spread it — over time, across families, and through generations. Rather than treat the patriarchy’s problems as a series of revelations, it probes the various elements within sexual politics that work to prop men up — and it does so through spicy, smart conflicts. It’s hard to get enough of Harper’s foursome, just as it’s difficult to predict where Season 2 may end up (though, yes, it once again ends in murder). Performances by Plaza, James, Impacciatore, and especially Fahy help make up for fewer laughs by bringing precision and passion to their respective parts.

“The White Lotus” may not feel as light on its feet as last summer’s surprise hit, but it’s certainly not resting on its laurels. Despite what resorts catering to the status quo may contend, comfort isn’t everything. Some things need to be shaken up.