To mark Holly’s 40th birthday, Phillip and the rest of the This Morning team had a number of surprises up their sleeves. This included a chat with a pair of North Devon farmers who had a couple of adorable lambs to show to the ITV host. However, when the farmers began to describe the animals’ features, the presenters in the studio couldn’t stifle their laughter.

Discussing the unique breed of lamb, Holly asked the farming duo: “They are quite rare and they are so sweet, their little faces,

“And that kind of makes them in huge demand, doesn’t it?”

The farmers replied to the This Morning host: “Yes, so they have a very unique, sort of, teddy bear appearance. 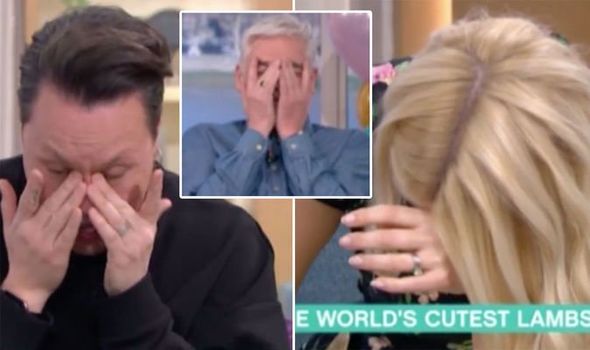 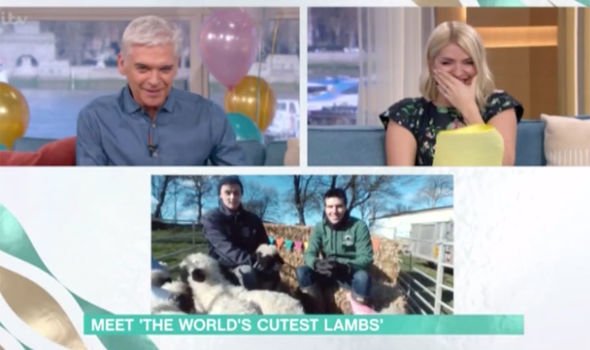 However, while the farmer continued to delve into the details, laughter could be heard coming from the ITV studio.

As the cameras returned to the This Morning studio, Phillip explained: “I think the word was ‘hocks’, they’ve got hocks.”

By this point, the show was completely derailed as Gok and Holly burst into laughter after mishearing the words.

Phillip tried his best to try and get the show on track but also found himself in fits of giggles at the remark.

“I think that’s what was said,” Phillip managed to muster up through his laughter.

Eventually, the This Morning host regained enough composure to apologise for the reaction, as he said: “Sorry guys, they’ve got black hocks, yeah?”

Seeing the funny side as well, one of the farmers cheekily remarked: “They have got those as well, Phillip.”

“Yeah, okay,” Phillip replied as he held his hands up to his face to try and shield his laughter.

Wiping away tears of laughter, Holly tried to get another question as she asked: “They’re rather expensive aren’t they?

“If you wanted to buy one, they come with a hefty price tag?”

But by this point, the hilarity of the scenario had well and truly taken over, sending the entire interview into chaos.

And it wasn’t just the This Morning presenters who saw the funny side of the moment.

Taking to Twitter, one fan said of the clip: “Aching laughing at the show today!”

A second agreed: “That was hysterical [laugh emoji], [sheep emoji].”

There were plenty of other surprises on the show for Holly as she celebrated turning 40, including a chat with some of her old school mates, James Martin cooking up her favourite dishes, and a tearjerking poem from co-host Phillip.

This Morning continues weekdays at 10am on ITV.