With Andy growing up and heading off to college Toy Story 3 felt very much like the end of an era, so much so that we almost believed Disney’s assurances that the series had been relegate to the great toybox in the sky.

Even so, while we were thrilled by the 2014 announcement that Buzz, Woody and the gang would be back for a fourth movie, it didn’t exactly come as a shock. It being Pixar’s most instantly recognisable property and all.

The excitement continues to build: the Toy Story 4 presentation at D23 Expo 2015 (Disney’s big, annual get together) ended with Randy Newman performing a live rendition of ‘You’ve Got a Friend in Me’ as green Army men dropped from the ceiling and costumed dancers including Lotso, Mr Potato Head and the rest of the gang sprang onto stage. Yee-haw!

Here’s all you need to know about the plans for bringing the beloved toys back to the big screen in Toy Story 4:

The first trailers for Toy Story 4 have been released. The first doesn’t reveal anything about the plot of the long-awaited sequel, but it does introduce a strange new character.

The familiar cast hold hands, circling blissfully beneath a cloudy sky to Judy Collins’ cover of Joni Mitchell’s ‘Both Sides Now’. But then we get around to Forky, a piece of plastic cutlery with pipe cleaners for arms, and he freaks out, crying, “I don’t belong here!” and sending everyone flying.

The second trailer introduces two fluffy carnival prizes, voiced by Jordan Peele and Keegan-Michael Key, who riff on the idea of a new Toy Story movie with bad impressions, before being corrected by the real Woody and Buzz. 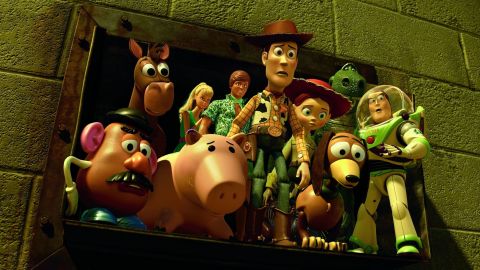 At the original Toy Story 4 announcement the film was set for release on June 16, 2017, but that date has of course been and gone with no sign of the film.

Footage of Toy Story 4 debuted at CineEurope in June 2018. 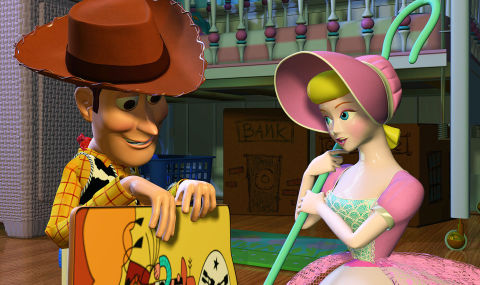 One question mark hanging over Toy Story 4 has been that the previous films form a neat trilogy about Andy’s relationship to his toys.

In Toy Story of Terror! and Toy Story that Time Forgot the gang of toys remain with Bonnie, the little girl who Andy bequeathed them to when he grew up. It’s a safe bet that she’ll continue to be their owner in any new movie.

Pixar is calling the new film a “standalone” adventure/love story, which will centre around the search for Bo Peep.

The shepherding object of Woody’s affections was missing from the last movie, with Lee Unkrich (who directed Toy Story 3) saying that she had been sold at a yard sale.

John Lasseter said at D23 that the story is in part based on the life of his wife, former Apple computer engineer Nancy. “Bo Peep really reminds me of my wife Nancy in many ways,” he said. “And my wife Nancy has an incredible emotional story, before I met her, so it’s a very personal story — as is every film at Pixar. But that’s what this one is for me. It’s a very touching story that’s inspired by my love for my wife.”

No details on the secret origin of Nancy Lasseter as of yet.

Toy Story 4 director: The creative team is getting back together 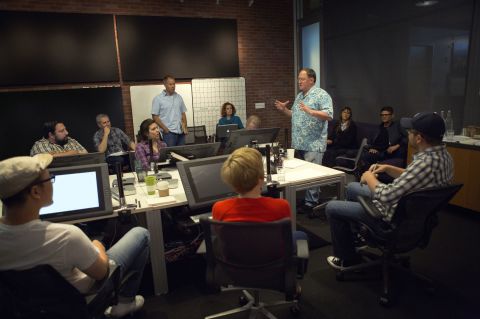 Pixar storyboard artist (and sometime voice actor) Josh Cooley – who cut his teeth on the excellent shorts George & AJ and Inside Out spin-off Riley’s First Date – is directing the movie.

Galyn Susman is also back as producer after her work on the three Toy Story shorts, and music fans can rest assured – Pixar favourite Randy Newman is returning for the soundtrack.

Celeste and Jesse Forever writers Rashida Jones and Will McCormack (of Parks and Recreation and Brothers and Sisters fame, respectively) were initially on board, but they dropped out in November 2017 and were replaced by Stephany Folsom as of January 2018.

We’re still waiting for word on the return of Tom Hanks, Tim Allen, Joan Cusack and the rest, but we would be pretty astounded if Pixar planned to go ahead without them. That would be like a surprise party with no guests.

Outside of the regulars, Patricia Arquette will reportedly be joining the fun to voice a character described as a “hippie mother”.

It’s not *just* a license to print money 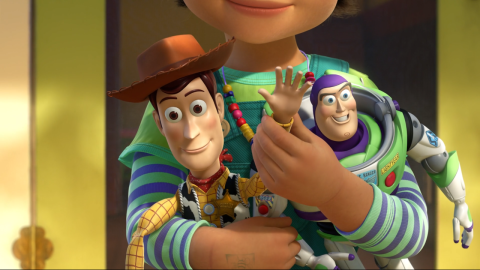 Lasseter was keen to make it clear that Pixar isn’t just cashing in on its most famous brand with Toy Story 4. Obviously it is the path of least resistance to a heap of money, but it does feel like they genuinely held off before deciding to make the film.

So we’re inclined to believe Lasseter when he says, “We love these characters so much – they are like family to us. We don’t want to do anything with them unless it lives up to or surpasses what’s gone before.

“Toy Story 3 ended Woody and Buzz’s story with Andy so perfectly that for a long time, we never even talked about doing another Toy Story movie. But when Andrew, Pete, Lee and I came up with this new idea, I just could not stop thinking about it. It was so exciting to me, I knew we had to make this movie – and I wanted to direct it myself.”