If ever you wondered what a typical day in the life of our survivors is like when they aren’t fighting off a Big Bad or defending their community against a horde of zombies, Sunday’s Walking Dead had your name written all over it. If you’ve never wondered that… erm, you probably didn’t love this episode, in which Carol made soup, and Daryl fixed his bike.

Personally, I dug it as a heaping slice of life. But then, I could probably watch Norman Reedus and Melissa McBride knit mittens and be entertained. Anyway, whether you liked or loathed “Diverged,” the details of what transpired are below.

‘SMELLS LIKE DARYL’ | As the hour began, Daryl and Carol were leaving Leah’s cabin with Dog after their big fight. Things remained chilly between them, but Daryl still offered Carol his pocket knife to open her stuck water bottle. When their paths, as the title suggested they would, diverged, with Carol going back and Daryl poking around awhile longer, Dog opted to follow her. “Nice,” grumbled Daryl. Once home in Alexandria, Carol informed her four-legged companion that she’d meant it when she’d told Daryl that she didn’t need an apology. “I know he meant what he said, and an apology’s just a truce. It doesn’t fix anything” — unlike belly rubs, she added.

Though Carol was desperate to make herself useful, Jerry couldn’t think of a single thing for her to do. But when his tummy rumbled, she got the bright idea to not only mend the tattered scarf to which Dog had drawn her attention but make soup. Never mind that the rats had been in the grain and the solar panels were out of whack. “I’ll make it work,” she said. “You always do,” he replied. No sooner had she gotten to work than Dog freaked out chasing a rat around the kitchen. Banishing him to Daryl’s quarters, she MacGyver’d a mousetrap, because that’s just what Carol does — she makes it work. 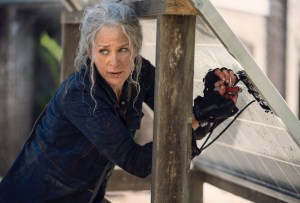 ‘YESTERDAY WAS NOT MY BEST DAY’ | Foraging for ingredients to replace the ones that Dog had knocked over, Carol took out a bunch of walkers with the same ease that you or I might sweep up dust bunnies. She then used Daryl’s knife to fix Alexandria’s solar panels. Why? Because there is nothing that Carol can’t do. Shortly, she let Dog back into the kitchen and promised him scraps if he was a good boy. She also caught the rat… and promptly dropped it, leading to a funny if unlikely scenario in which our fierce warrior haplessly chased the thing around like she was in a Tom and Jerry cartoon. When finally the rat scurried through a hole in the wall, she plugged it with the scarf… just as the restored power went out. Sigh. “There’ll be more sun tomorrow,” she told Dog, “right, buddy?”

That night, Carol reassured Dog that Daryl would be back. He always came back. “I don’t, though, do I?” Should she just scram? she asked. Alas, Dog offered no barks of wisdom. Later, Dog woke up Carol freaking out. The rat was back in the kitchen. First, Carol cut a hole in the wall to see if she could spot it. Then she stabbed at the wall. Finally, she just tore the wall to shreds. When she’d exhausted herself, she sat on the floor, Dog sweetly lying down next to her in the debris. The next day, Jerry stopped by and quickly admitted that he was checking on Carol. When she’d come back without Daryl, Jerry had assumed she might be in need of an Ezekiel saying like, “A friend is someone who thinks you’re perfect even if everyone else thinks you’re broken.” What if one’s best friend just realized that one was broken later than everyone else? Ezekiel didn’t have a saying for that that Jerry knew of. What would he himself say? she asked. Almost in tears, Jerry just hugged her… as the rat scurried away like it was checking out of a hotel. 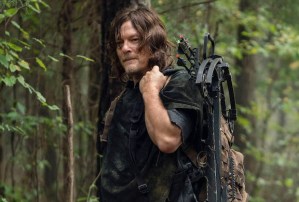 ‘YOU GOTTA BE KIDDING ME’ | While all that was going on, Daryl’s bike conked out. Thankfully, he soon found a bunch of deserted vehicles; those woods are lousy with ’em, aren’t they? While underneath one, raiding it for parts, a walker inside moved, sending the precariously parked vehicle tilting ominously in Daryl’s direction. (You can watch below.) Needless to say, he didn’t get squashed. Upon returning to his bike, Daryl quickly ascertained that dang it, he couldn’t make the repair without the knife that double dang it, Carol hadn’t returned. So he was walking the bike home when he happened upon some camo-clad walkers and, by the hardest, obtained from their gear a bunch of supplies — including a new pocket knife.

When at last Daryl made his way back to Alexandria, Carol was just giving up on mending the scarf; she had walls to repair now, anyway. What happened to you? they each asked upon seeing one another’s disheveled state. “You know,” Carol said, “the usual.” He didn’t want any of her soup, nor did he want his knife back. But as showrunner Angela Kang recently told us — and plans for their spinoff suggest — their friendship was anything but kaput. So, what did you think of “Diverged”? If nothing else, since it focused on well-established characters, you had to like it better than “Splinter,” right?