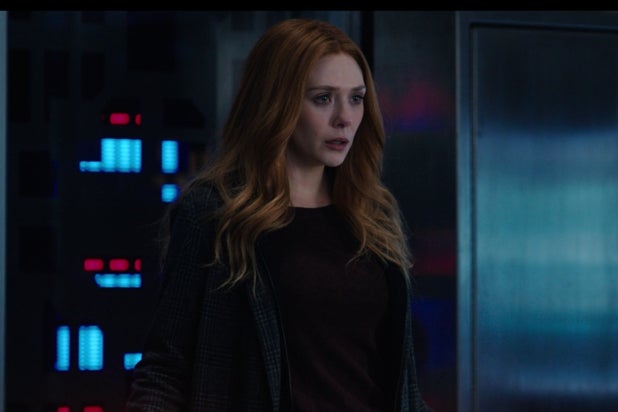 Warning: Spoilers ahead for “WandaVision” episode 8, “Previously On.”

In its penultimate episode, “WandaVision” dropped a whole bunch of brand new information. But let’s start with something that we can’t get out of our heads after seeing “Previously On”: That image of the Scarlet Witch that Wanda saw when she had her connection with the Mind Stone?

When Agatha is forcing Wanda to relive significant moments in her life in order to figure out how she became so powerful, one of the memories is Wanda’s time with Hydra. We see her during an experimentation where she’s locked in a room with the scepter, which houses the Mind Stone. She’s told to touch it, even though we hear a scientist say that not one subject has survived direct contact. But Wanda does, and the blue casing around the stone explodes, revealing the Mind Stone’s actual orange color as on Vision’s forehead.

At this point, all of the stone’s power seemingly hits her and she sees a vision of a woman in a Scarlet Witch costume before collapsing. 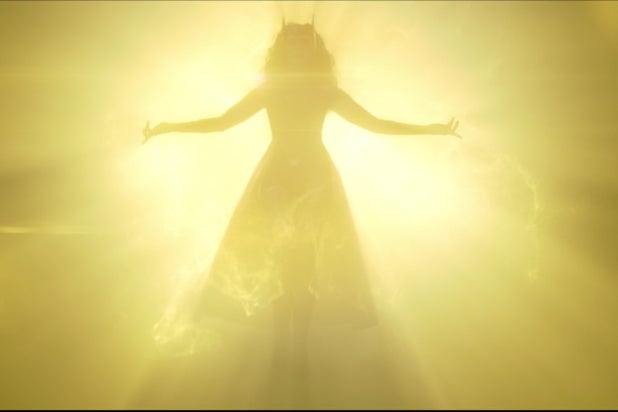 We’d be inclined to say (and believe) that the person in the costume was Wanda herself, as the show has clearly been building toward the unveiling of her comic book superhero identity which, until now, has never even been mentioned in the MCU. (Remember back in Episode 4 when Hayward kept asking if Wanda had a code name?)

But honestly, we’re not too sure. Even if you brighten and sharpen a screenshot, it’s impossible to say that the person in the vision is Wanda Maximoff. And if the comics are any guide, there’s a very good chance that the person Wanda saw in that costume was actually her mom, and that’s something we can back up by looking at the 2016 Scarlet Witch comic by James Robinson.

The most notable thing about this run is that it retconned Scarlet Witch’s origin story, which for years was rooted in Wanda being a mutant and the daughter of Magneto. In Robinson’s story, Wanda mom was neither Magneto’s daughter nor a mutant. She was a just a powerful witch whose biological mother, Natalya Maximoff, held the “Scarlet Witch” mantle. After Natalya died attempting to rescue Wanda and Pietro from the High Evolutionary, her title was passed down to Wanda.

So why is this significant? Well, in the latest “WandaVision” episode, Marvel essentially just retconned MCU history by showing that Wanda didn’t get her powers from being experimented on by Hydra, as we’d been led to believe in “Age of Ultron.” She was instead apparently born with them and her experience with the Mind Stone served to awaken and enhance her innate powers. So it’s very possible that instead of seeing herself when she connects with the Infinity Stone, Wanda is seeing a vision of her mom.

Marvel doesn’t usually pull from one specific comic run when they’re adapting their stories into live action. Often, they simply use an event or significant story as a foundation, which they then take a lot of liberties with based on what other stories exist for the character. (See “The Ifinity Saga” and “Captain America: Civil War.”) So it’s fair to say that even if they are adapting parts of Robinson’s, it’s only small pieces of it. Plus, we’ve already seen hints of other comic influences in “WandaVision” such as Brian Michael Bendis’ “House of M” and Tom King’s “The Vision,” suggesting Marvel is pulling from various notable runs over the years.

But Robinson’s story is hugely focused on sorcery and witchcraft, which was also a big focus in the latest episode as we learned a little about Agatha’s past which dates back to the days of the Salem Witch Trials. (It’s also worth noting that Robinson’s run placed a significant focus on Wanda’s mental health, showing her getting help for her trauma.)

We probably won’t get a real answer about Wanda’s mom next week, as there are so many other questions and plots that need to be tied up before the series ends. (Like, where the heck are Monica, Pietro, Darcy, and Vision?!) But Wanda Maximoff will definitely embrace that Scarlet Witch title before the show is over and hopefully we’ll get some clarity on the real history behind her powers and her lineage.