“Ten or more years later, all of a sudden these guys are in their mid to late 40s and they end up single — what do they do,” Dobkin says of Owen Wilson and Vince Vaughn comedy 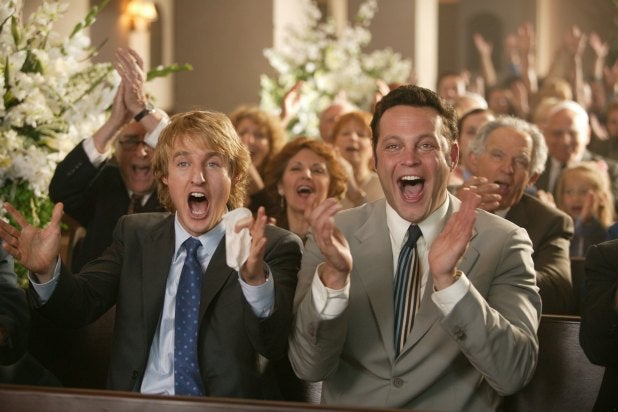 “Wedding Crashers” director David Dobkin has an idea for a sequel to the 2005 Owen Wilson and Vince Vaughn comedy, and he’s even played around with a screenplay in the hopes that they’ll “finally get it all together.”

Dobkin, who just directed “Wedding Crashers” alums Will Ferrell and Rachel McAdams in “Eurovision” on Netflix, imagined a scenario of what these guys might be doing over a decade removed from the original film.

“Ten or more years later, all of a sudden these guys are in their mid to late 40s and they end up single — what do they do,” Dobkin told EW. “That’s interesting to me, because I know guys in their mid to late 40s who have ended up single, whether it’s out of marriages that didn’t work out or they just didn’t find anyone to marry, and it’s a head trip for men, the idea of maybe I’m not going to be a dad, maybe I’m not going to be married. So it became a real cultural question and it yielded an interesting kind of center to the movie.”

The comedy is celebrating its 15th anniversary this year, providing early breakout roles for Bradley Cooper and becoming a box office smash for an R-rated comedy. Dobkin says he, Wilson and Vaughn were then pressured to come up with some idea for a sequel shortly after the film’s massive success, but it never came together. Though star Isla Fisher first teased back in 2016 that a new “Wedding Crashers” was in the works.

“We talked about it for many, many years,” Dobkin said. “We realized we were remaking the same movie again and we really didn’t want to do that.”

In that sense, Dobkin says they’re in no rush to make a sequel but that he’s still talking with both Wilson and Vaughn.

“I believe in sequels that are new and appropriate, and I don’t think there’s a time limit of chasing what that is. There may be one day when we can finally get it all together,” Dobkin said. “I can tell you that it’s really fun to read those voices of these guys on the page again. There was a joy that I was surprised at when I read the first draft of what could have been, or maybe one day will be, this sequel. I do think audiences would love it.”

7 John McCain Cameos in Movies and TV, From 'Wedding Crashers' to 'SNL' to 'Parks and Rec' (Videos)

The Republican maverick was almost a Hollywood regular