“If I had tried to strangle David Goyer, you probably wouldn’t be talking to me now,” actor says in response to the comedian’s 2012 comments 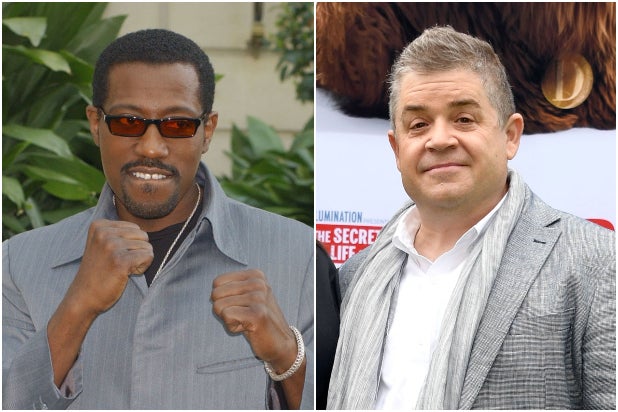 Wesley Snipes has denied an old accusation from comedian Patton Oswalt that he acted strangely on the set of “Blade: Trinity,” specifically denying that he attempted to strangle its director, David Goyer.

Oswalt told The A.V. Club in an interview from 2012 that, on set for the 2004 film “Blade: Trinity,” Snipes was “f—ing crazy in a hilarious way” and shared anecdotes of Snipes’ wild behavior, among them that he “tried to strangle the director.”

“Let me tell you one thing. If I had tried to strangle David Goyer, you probably wouldn’t be talking to me now. A black guy with muscles strangling the director of a movie is going to jail, I guarantee you,” Snipes told The Guardian Monday. “Did I go to jail for strangling him? Never happened.”

Snipes said he did not know Oswalt well and barely remembered him on set. But he also responded to some of Oswalt’s other claims from that same interview. Among them, Oswalt said that Goyer asked Snipes to resign from the remainder of the shoot, after which said Snipes would only communicate with Post-It notes and would sign each note as “Blade.”

“Once again, Mr. Oswalt is the authority. Hohoho! Why do people believe this guy’s version of this story? Answer me that,” Snipes said. “This is part of the challenges that we as African Americans face here in America — these microaggressions. The presumption that one white guy can make a statement and that statement stands as true! Why would people believe his version is true? Because they are predisposed to believing the Black guy is always the problem. And all it takes is one person, Mr. Oswalt, who I really don’t know. I can barely remember him on the set, but it’s fascinating that his statement alone was enough to make people go: ‘Yeah, you know Snipes has got a problem.’”

Representatives for Oswalt and Goyer did not immediately respond to TheWrap for a request for comment.

Snipes also reminded The Guardian that he was an executive producer on “Blade: Trinity” and had authority over the director and the project.

“I had contractual director approval. I was not just the actor for hire. I had au-thor-i-ty to say, to dictate, to decide. This was a hard concept for a lot of people to wrap their heads around,” Snipes said.